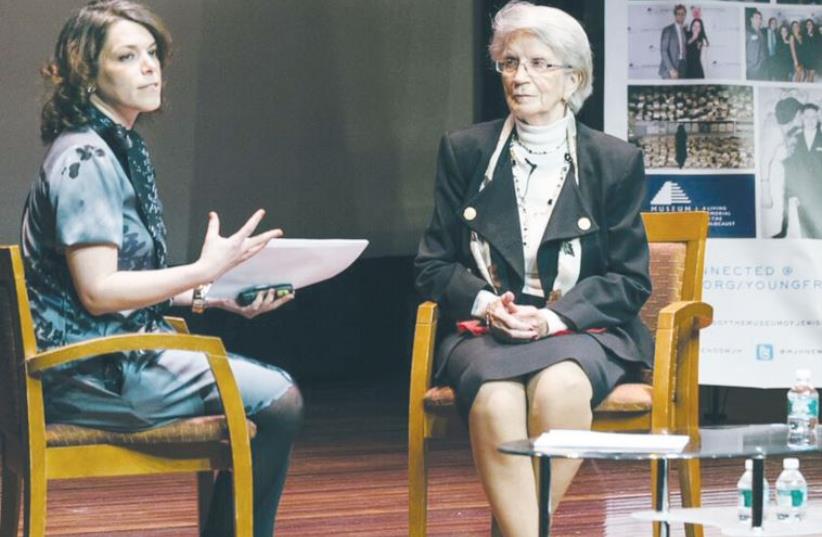 Young Friends board member Miriam Leichtling interviews Miriam Leichtling interviews Holocaust survivor Stefania Hecht in New York
(photo credit: PAKO DOMINGUEZ)
Advertisement
NEW YORK – “By being here tonight, you show that you care about our past,” Rabbi Mark Wildes of the Manhattan Jewish Experience (MJE) told over 300 young Jewish professionals who gathered to mark Holocaust Remembrance Day on Wednesday.MJE, which aims to connect and engage young Jewish professionals in New York City, co-hosted its annual “Stories of Survivors” with the Young Friends of the Museum at the Museum of Jewish Heritage. The Young Friends is a member group of young professionals aiming to promote awareness of the museum through social, educational and philanthropic programming.The event is one the largest gatherings for young Jewish professionals in New York City. During the event, Holocaust survivor Stefania Hecht told the audience about her childhood in Hungary, being an orphan in Auschwitz, and her desperate search for family members in the ghetto.“By coming to hear a survivor tell her story, you are ensuring that the flame of the Shoah, that the memory of the Holocaust, is transmitted to another generation,” Rabbi Wildes said.“But to truly keep the memory of the six million alive, we have to embrace the Jewish heritage that our grandparents and our great grandparents so cherished and lived for.”“We, those who are sitting in this room, the next generation, need to appreciate the way they lived and not simply the way their lives were taken,” he continued.The former director of programming at MJE, Miriam Leichtling, who interviewed Mrs. Hecht on stage, said that listening to the story of a Holocaust survivor is like “taking on a precious cargo.”“You become a steward for the next generation,” she said.“I can’t change things that happened in the past, but I can help survivors find their voice, if they choose. I can help make sure memories do not die. I can help young people be inspired and stay connected to Jewish life.... which is everything the Nazis were trying to destroy.”Twenty-seven-year old Claire Moskowitz told The Jerusalem Post that keeping the memory of the Holocaust is very important to her.“I think as the remaining Holocaust survivors get older it becomes more and more important to take advantage of the opportunities we have to hear their stories, their voices and to kind of get that firsthand perspective because you know, in a number of years we won’t have that,” she said.Moskowitz, whose grandmother is a Holocaust survivor, said she is concerned that young people today hear only very similar Holocaust survivors’ stories every year and that “a lot of generalization is made.”“If you have these singular instances that represent Holocaust memory for you, if you take all these detached piece, how do you, how do I, really use that to teach my children about the Holocaust?” she explained.“I think for it to be authentic for me personally, there needs to be more." As the event came to an end, Stefania Hecht was asked what kind of advice she would give to the young people sitting in the room.“They should think ahead. Life can be very cruel,” she answered. “Try to be happy and don’t stay alone. I wish them happiness.”MJE's "Stories of Survivors" program is a joint venture with the Young Friends of the Jewish Heritage Museum and the museum itself.