Dr. Salman Zarka was invited to speak in Massachusetts and Rhode Island about what his hospital is doing to treat Syrians caught in the crossfire of their country's civil war. 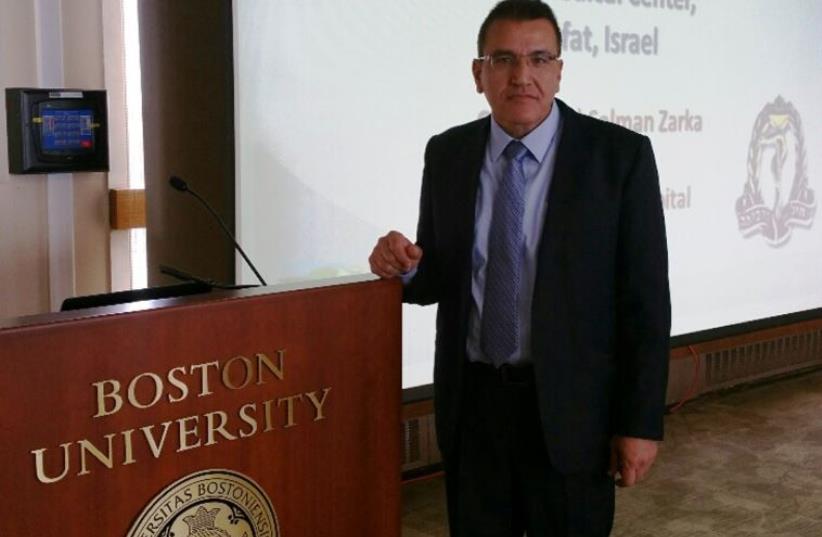 Dr. Salman Zarka at Boston University
(photo credit: ZIV MEDICAL CENTER)
Advertisement
Dr. Salman Zarka, the first Druse doctor to become director- general of an Israeli public hospital, is lecturing Christian and Jewish communities in the United States about Ziv Medical Center’s treatment of Syrians wounded in their country’s civil war.Addressing Christian ministers and priests, Boston and Brown University lecturers and students and Jews in two New England states, Zarka, a lieutenant- colonel (res.) in the IDF said on Wednesday that so far, his hospital staff in Safed, has treated 600 Syrians who have crossed the border to get medical care.Zarka was invited by the Israeli consulate in New England to visit the states of Massachusetts and Rhode Island to talk about what his hospital has done in the last two-and-a-half years of the Syrian fighting.He has also given a lecture at a Boston synagogue where Israeli pupils of the Leo Baeck School from Haifa were visiting.The Syrian wounded, among them men, woman and children, have been treated for physical wounds and emotional trauma, said Zarka, who also established the IDF’s mobile hospital on the northern border from which the wounded have been brought to nearby Ziv.Hospital officials said he was enthusiastically received and asked many questions by audience members who said they were more used to seeing negative news reports about Israeli soldiers fighting violence in disputed territories. Many were amazed at the humanitarian actions they said they had not heard about in their own media, the officials said.