YaLa peace movement organizes event in village on Ramallah outskirts to convey solidarity in light of fresh round of negotiations.

By TAMARA ZIEVE
AUGUST 1, 2013 17:41
Iftar dinner Ramadan 370
(photo credit: REUTERS)
Advertisement
Some 40 Palestinians and Israelis shared an Iftar feast in the West Bank on Wednesday, in a show of solidarity on the heels of the renewed Palestinian-Israeli peace talks.The group was hosted by a Palestinian resident of a village on the outskirts of Ramallah, in an initiative led by the YaLa-Young Leaders online movement which seeks to create a new generation of leaders in the Middle East, united by the values of freedom, equality, prosperity and peace.YaLa organized the Iftar meal as an outlet for its members - who have been working daily for the movement both online and offline - to have the rare opportunity to socialize. Guests mingled, ate and got to know one another, and an Italian-Palestinian participant sang a rendition of Pete Seeger's We Shall Overcome - an anthem of the African-American Civil Rights Movement. Peace activist Mutasem Rumi of the Ramallah area told The Jerusalem Post that while there are many Palestinians who do support US Secretary of State John Kerry's peace push, they don't raise their voices or take to the streets. "The problem is that the peace supporters keep silent while the other side keeps moving," he asserts."I really want both sides (the Israelis and Palestinians) to give peace a real opportunity. We've been at war for a long time... so we should take a long breath, be hopeful and patient, since the other solution is worse," he added. "If peace dies, war and bloodshed will grow on the soil of its corpse." 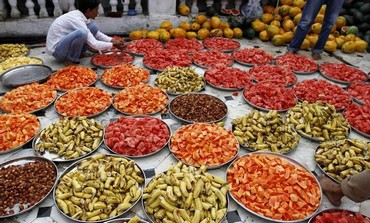 Iftar meal (illustrative)Doron Tzur of Herzilya, who was invited to the dinner by YaLa members, described the event as warm, friendly and sincere. Tzur, however, opined that although such meetings are important, their impact is limited as they are mostly attended by people who have multi-cultural backgrounds and who know English well enough to express themselves. "This is only a minor fraction of the population," he noted.In a message to the negotiators and leaders on both sides, Tzur said: "We empower you to openly and candidly go beyond stale formula and bravely explore every path for increasing dignity, security, freedom and prosperity for Arabic and Hebrew speakers alike.""We task you to evolve at least one path that majorities in both constituencies, after due consideration and deliberation, will resolve to personally implement, despite hardships and opposition," he continued. "If you don't succeed, then before you start replaying the worn-out conflict routines, please give us a chance and your full cooperation, to evolve mutually desired paths for both you and the public's to choose from. You have nothing to lose and we'll do a great job because our lives depend on it."Saleem Shtayeh, who came to the event from Nablus, told the Post that "It was a great event, sitting and supporting peace together, eating together, with no fears with hope for generation."

"No more excuses - support a peace agreement now," he said, employing the slogan of a video campaign launched by YaLa to counter negative reactions in the Palestinian territories and Israel towards the negotiations, and to alleviate the situation in which opposing voices are heard loudly while supportive voices remain silent."Yesterday the Palestinian flag was presented in full glory at the Israeli Knesset (Parliament). Seeing it was a sign of how things should, and can, be," reads a post on the campaign's Facebook page. "If leaders are 'unsure' or too concerned by petty politics to make progress, we'll be here to make sure you can't step back."Jewish American MA student and YaLa intern Tiffany Harris told the Post the event allowed her to experience "the social and emotional power of a shared meal.""Talks were were generally fun, lighthearted, and inquisitive," Harris said. "It felt comfortable and people asked tough questions, which, at times, veered the conversation to more serious and emotional topics." She added that she appreciated having the opportunity to compare similarities in Muslim and Jewish religious and cultural traditions."It was nice to know what we shared this meal on the same day Israeli and Palestinian negotiators engaged in peace talks at a Ramadan break-fast dinner in Washington DC," Harris remarked. "I like to think that we contributed to the negotiations, and a peace agreement in our own special way."
Advertisement
Subscribe for our daily newsletter