In interview with Ch. 2, Moshe Ya'alon disputes notion that Palestinians have already recognized Israel as a Jewish state. 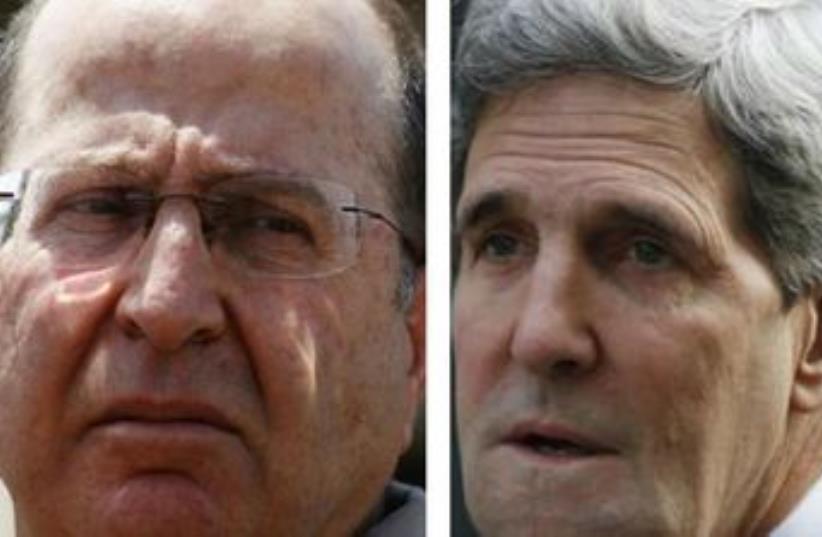 US Secretary of State John Kerry (R) and Defense Minister Moshe Ya'alon
(photo credit: REUTERS)
Advertisement
One day after US Secretary of State John Kerry told lawmakers in Washington that raising the idea of Palestinian recognition of Israel as a Jewish state was a mistake, Defense Minister Moshe Ya’alon declined to say whether Kerry is an honest broker in peace talks between the Israeli government and the Palestinian Authority.In an interview which aired Saturday on Channel 2’s Meet the Press, Ya’alon disputes Kerry’s contention that Israel erred in demanding Palestinian recognition of its Jewish character.“[Late Palestinian leader Yasser] Arafat never recognized Israel as a Jewish state,” the defense minister told Channel 2. “That was one of his manipulations. [The idea that the Palestinians already recognized Israel as a Jewish state] is simply not true.”Ya’alon was responding to Kerry’s remarks to members of Congress on Thursday that international law already declares Israel a Jewish state, and called Prime Minister Benyamin Netanyahu's insistence on a public declaration of Israel's Jewish character from the Palestinians "a mistake" in the diplomatic process."I think it’s a mistake for some people to be raising it again and again as the critical decider of their attitude toward the possibility of a state, and peace, and we've obviously made that clear," Kerry told the House Foreign Relations Committee, in a hearing on budget matters.When asked by Channel 2 if Kerry was an honest broker for peace, Ya’alon sidestepped the issue. “That’s something we will have to see during the course of the negotiations,” the defense minister said.Ya’alon did not deny that the two men continue to disagree on key issues related to the peace process, though he added that both Jerusalem and Washington are engaging in an open dialogue.When asked about the Palestinian demand to include Israeli Arabs on the list of convicted terrorists to be freed as part of the fourth and final prisoner release scheduled for later this month, Ya’alon hinted that Kerry may have promised Ramallah that Israeli Arabs would be release without receiving Israel’s approval.“The Palestinians never received such a commitment from the government of Israel,” he said. “Maybe they did from Kerry. [PA chairman Mahmoud] Abbas has no sovereign power over Arab citizens of Israel, and I will oppose this [release] in the government if it comes to a vote.”Ya’alon repeated his belief that the stability of the PA is contingent on Israel’s continued presence in the West Bank.“I wanted peace in the past, and I’ve also supported the principle of land for peace,” he said. “But given the bitter experience we’ve had, unfortunately the kind of peace that we yearn for will not come to pass in our generation.”The defense minister assailed those who claimed that Israel’s continued rule over millions of Palestinians would endanger the Jewish and democratic character of the state.“If there’s one good thing that emerged from the Oslo Accords, it is Palestinian autonomy which allows them to vote for their own parliament,” he said. “So I’m against these attempts at fear-mongering, just as I am against those who try to frighten us by claiming we will face international isolation.”“We need to wage a public relations struggle that advocates the justness of our cause,” he said. “This is how we will defeat these threats and boycotts.”Ya’alon has been bitterly critical of Kerry, particularly due to what is perceived by some in Israel as the secretary’s preoccupation with the Israeli-Palestinian peace process.Earlier this year, Ya’alon was quoted by the daily tabloid Yedioth Ahronoth as saying Kerry was “obsessive” and “messianic.”According to the newspaper, the defense minister told associates in private conversations that Kerry “should take his Nobel Prize and leave us alone.”“Abu Mazen lives and dies by our sword,” Ya’alon was quoted as saying by Yedioth. “Once we leave Judea and Samaria, he is finished. In effect, during these past months, there haven’t been negotiations with the Palestinians, but with the Americans.”“The only thing that can ‘save’ us is for John Kerry to win his Nobel Prize and leave us alone,” the defense minister reportedly said.