Israel agrees to Jordanian request to establish a joint Israeli-Jordanian team to complete probe into killing of Judge Raed Zeiter by IDF soldiers. 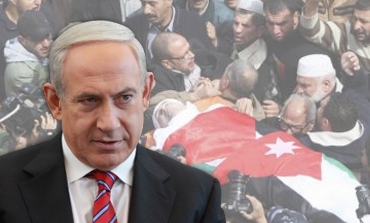 In a clear effort to tamp down tensions with Jordan over the killing of Raed Za’eiter at the Allenby Bridge on Monday, the Prime Minister’s Office issued a statement Tuesday expressing regret over his death.“Israel regrets the death of judge Raed Za’eiter yesterday at the King Hussein [Allenby] Bridge and expresses its sympathies to the people and government of Jordan,” the statement said.“In light of our commitment to the peace treaty, Israel has already shared with Jordan the results of its preliminary investigation of the incident,” the statement continued. “Israel has also agreed to a Jordanian request to establish a joint Israeli-Jordanian team to complete the investigation.” An initial inquiry by Israeli security services found that Za’eiter, a Nablus-born jurist and magistrate’s court judge in Jordan, shouted, “Allahu akbar” while charging IDF troops at the terminal.According to a joint probe by the IDF, the Israel Police and the Shin Bet (Israel Security Agency), Za’eiter, who had Jordanian citizenship, attempted to snatch the rifle of one of the soldiers. Feeling their lives to be in danger, the soldiers acted in accordance with the rules of engagement and fired at the man’s legs.Za’eiter then continued attacking the soldiers with a metal pole before he was shot again, this time succumbing to his wounds.Investigators have determined so far that the soldiers acted properly, given that Za’eiter “posed a clear danger” to their lives. The army said it was continuing the investigation.The Prime Minister’s Office statement said that the joint Israeli-Jordanian investigation team would start its work shortly.Over the last 24 hours, the two governments held conversations about the matter at senior levels, government officials said.One official said that the peace between Israel and Jordan was an Israeli strategic interest and one of the foundations of Israel’s national security strategy.“We have a special relationship with the Jordanians, and we want to make sure that relationship is protected,” he said.Jordan, one of two Arab states to have signed a peace treaty with Israel, summoned an Israeli diplomat on Monday to protest the killing, and jurists in Amman staged a demonstration on Tuesday in the Palace of Justice.In a statement on Tuesday, the Jordanian senate called for taking measures to put an end to Israeli disrespect, punish the attackers and send a message to the Israeli “occupiers,” Jordan’s Petra News Agency reported.Jordanian newspaper Al-Ghad on Tuesday cited MP Yahya al-Saud, who in the past has made harsh comments against Jews, as calling in a Jordanian TV interview to open up “the gate of jihad” against Israel.It also follows official Jordanian protests last month over an inconclusive parliamentary debate in Israel about a bill calling on Israel to establish its sovereignty over the Temple Mount.Prime Minister Binyamin Netanyahu said he would not let the bill pass.Protesters demanded the cancellation of the peace treaty outside the Israeli Embassy on Monday, and at least four people were arrested, according to activists that The Jordan Times quoted.MPs also expressed outrage on Monday, with the Palestine Committee in the Lower House issuing a statement that called for the end of the peace treaty, the expulsion of Israel’s ambassador in Amman and the removal of Jordan’s envoy in Israel.MP Mejhem Sqour demanded that the prosecutor-general quickly open a case against the IDF.MP Khalil Atiyeh told The Jordan Times that the event was very serious and that lawmakers would put the “maximum pressure on the government to expel the Israeli ambassador from Amman.”Relatives and friends of Za’eiter said he had been a calm person who had never harmed anyone, according to the report.Jordanian Prime Minister Abdullah Ensour said on Tuesday that the Israeli government was "completely" responsible for the shooting.“The Jordanian government holds the Israeli government completely responsible for the hideous crime,” he told MPs at a meeting in parliament to discuss the incident, The Jordan Times reported.An official in Amman, briefed on Monday’s incident, said he believed Za’eiter had been killed by a “trigger-happy young soldier” who had been pushing passengers boarding a bus at Allenby. This had led to a heated argument with the judge, he said.Za’eiter was buried on Tuesday in Nablus. His body was wrapped in Palestinian and Jordanian flags.“From the Israeli account, we think there was an altercation...and the [soldiers] hit him and pushed him to the floor. His dignity could not accept the humiliation and insult,” said the judge’s bespectacled father, Alaa Za’eiter.Muhammad Sharif Zaid, a 34-year-old merchant from the West Bank who had been at the crossing with Za’eiter, told Reuters that an argument had started after controls at an Israeli checkpoint.“Raed and the soldier quarreled for some reason that I did not understand and pushed one another... I got onto the bus, and a minute later I heard one gunshot followed by three shots.”The passengers were then ordered back off the bus and saw Za’eiter lying on the ground.Zaid did not see the metal rod with which Za’eiter had allegedly threatened the soldiers. The Israelis said there were no surveillance camera images of the incident.