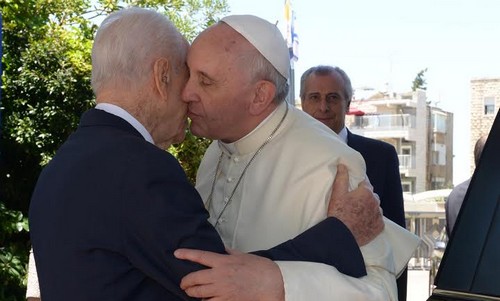 President Shimon Peres has asked Pope Francis to use the power of the Vatican to help Israel locate its missing soldiers, including airman Ron Arad.Peres issued his request during a private conversation at his Jerusalem residence on the last afternoon of the pontiff’s three-day visit to the region.IAF navigator Arad was 28 when his plane was downed over Lebanon in October 1986. He survived the crash and was captured by the Shi’ite group Amal, which then handed him over to Hezbollah in 1988. Israel had received three letters and two photographs of Arad from this period of captivity, but no other information exists that proves he survived beyond 1988. In 2008, the UN told Israel that, according to information it obtained from Hezbollah, Arad had died trying to escape in 1988. There is, however, no proof of his death.Also included in Peres’s request was for information about three soldiers who have been missing since the June 12, 1982 battle of Sultan Yacoub in Lebanon: Zachary Baumel, then 21, Tzvi Feldman, then 22, and Yehuda Katz, then 25.According to his spokeswoman, the president also requested information about soldiers who died, but whose bodies have never been found. She would not comment on details, but said Peres asked the pope to help regarding countries with which Israel does not have diplomatic ties.