Construction of 1,500 housing units in Ramat Shlomo are being delayed by 3 weeks, despite PM's promise of unchanged policy.

By HERB KEINON, DANIEL K. EISENBUD
Ramat Shlomo 311
(photo credit: Ariel Jerozolimski/The Jerusalem Post))
Advertisement
The plan to build 1,500 units in the northern Jerusalem Ramat Shlomo neighborhood that triggered a diplomatic crisis with Washington during US Vice President Joe Biden’s 2010 visit is currently being held up because of diplomatic considerations, Army Radio reported on Monday.According to the report, the second in a week claiming that Prime Minister Binyamin Netanyahu was holding up construction plans beyond the Green Line, the Prime Minister’s Office directed the Interior Ministry for the last three weeks to hold up the project because of “political reasons.”Sources in the Prime Minister’s Office denied that there was any de facto construction freeze, and said “there is no change in policy” regarding construction beyond the Green Line.While the Palestinian Authority has demanded a construction freeze as a precondition to renewing negotiations, Netanyahu has consistently said he would not freeze construction to bring the Palestinians back to the talks. 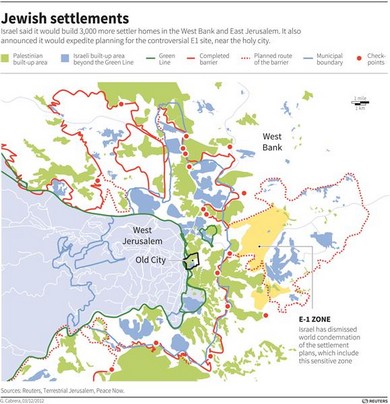 Click to enlarge image.The Army Radio reports come amid intensive efforts by US Secretary of State John Kerry to move Israel and the Palestinians back to the negotiating table, apparently by getting each side to avoid steps that would infuriate the other.The Palestinians have reportedly agreed not to take unilateral steps or initiate action against Israel in international forums for a number of months in order to give Kerry the space he needs to move the sides back to talks.The announcement last month by an Arab League delegation that it would accept an Israeli-Palestinian peace agreement that includes “mild” land swaps is also believed to be part of Kerry’s effort to create an atmosphere conducive to talks.Interior Ministry spokeswoman Efrat Orbach denied Monday that any directive had been given to the ministry from the Prime Minister’s Office to halt construction in Ramat Shlomo, adding that the delay is entirely due to “bureaucratic reasons.”We don’t have any instructions from the Prime Minister or his Office to freeze construction there,” said Orbach. “The ministry didn’t finish the process for approval [for construction] because we’re still waiting on the final maps necessary for final approval. The program is being delayed due to bureaucratic reasons, nothing else.”Nevertheless, one senior Construction and Housing Ministry official told Army Radio that while “we are vocally declaring that we will not accept any preconditions [for peace talks], in practice we are freezing the construction.We are not engaging in negotiations, and we’re also not building. It is a lose-lose situation for us.”The official called the current situation “ridiculous.”Jerusalem City Council member Meir Margalit (Meretz), meanwhile, declared that Netanyahu must choose between “construction and peace.”The government, Margalit said, “must clarify its goals; peace and settlements don’t go together. If they choose to continue to build settlements, they must understand the consequences.And if they choose to construct more settlements, be honest enough to say it openly, and let the Americans know exactly what [Netanyahu’s] politics are.”