"America is a country to which the Jewish people owe so much and to which I, as a son of America, am so personally indebted."

By MICHAEL WILNER
DECEMBER 4, 2013 02:31
Obama and Dermer in Oval Office 370
(photo credit: Courtesy Israel Embassy in Washington)
Advertisement
WASHINGTON -  Ron Dermer has officially taken office as the eighteenth Israeli ambassador to the United States after presenting proper paperwork to US President Barack Obama on Tuesday afternoon.During the ceremony at the Oval Office, Obama also received new ambassadors from Thailand, Romania, Colombia and Bahrain, among several others."The unique relationship between Israel and America extends beyond shared values and common interests," Dermer wrote in a personal letter he handed to the president. "It is anchored in a profound belief, as Martin Luther King Jr. so eloquently put it, that the arc of the moral universe is long but it bends towards justice."Dermer succeeds Michael Oren, who served as Israel's envoy since 2009."I feel proud and honored to serve as Israel's Ambassador to the United States," Dermer wrote in the White House guestbook. "America is a country to which the Jewish people owe so much and to which I, as a son of America, am so personally indebted. I look forward to working with you and your administration to make the bonds between Israel and America stronger than ever."The new ambassador presented Obama with a pair of stone cufflinks etched with a replica of the Menorah tablets found at the City of David excavation site in the Old City of Jerusalem. 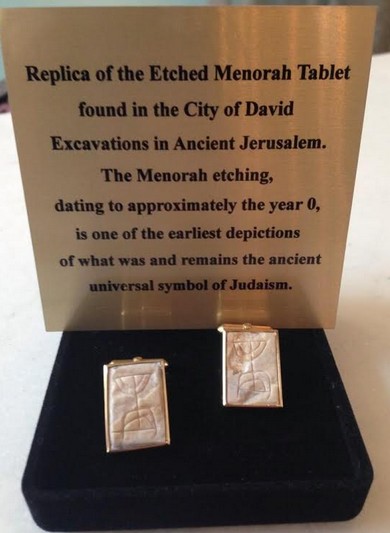 At a Hanukkah celebration on Monday evening, the night before the ceremony, Dermer spoke to a crowd gathered at the Israeli embassy in Washington about the importance of the menorah as a symbol of freedom.The Maccabees were righteous and brave to have fought "against the current," Dermer said, comparing the current Israeli government with a similar challenge as it confronts the prospect of a  nuclear-armed Iran.