The IDF and police forces early Sunday morning evacuated some 250 Palestinian activists from an outpost they erected in E1, an undeveloped area in the Ma’aleh Adumim settlement.

They completed the evacuation around an hour later, with no arrests or injuries reported by police, although Palestinian activists said at least one man was taken to a Ramallah hospital. Those protesters who refused to leave were carried down the hill by officers, but there was no violence, police said. 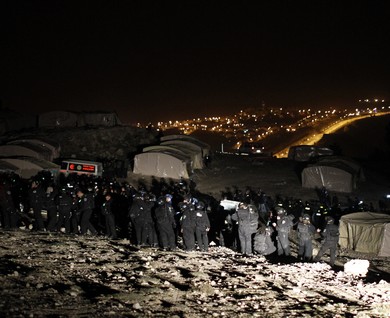 "Everyone was evacuated carefully and swiftly, without any injuries to officers or protesters," said police spokesman Micky Rosenfeld.

Activists said police brought at least some of those evicted to the Kalandiya checkpoint in the north of Jerusalem.

Prior to the evacuation, the state had appealed to the High Court of Justice, asking the court to rescind a temporary injunction it issued on Friday, saying that failure to evacuate immediately will lead to riots in the area.

In the interim, Prime Minister Binyamin Netanyahu ordered access roads to the area closed. The IDF then declared it a closed military zone.

The Palestinians “could be evacuated in several hours with no problem if the decision is made to do so,” Rosenfeld said ahead of the operation.

Palestinians headed to E1 on Friday and set up more than 20 tents to establish a new village, organizers said, following Israel’s decision last month to advance plans to build 3,500 homes there.

The Palestinian Authority has said that E1 land is needed so the future Palestinian state will be viable and have territorial continuity. It warned that Israeli construction there imperils the two-state solution. 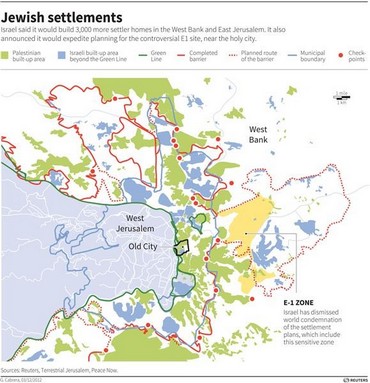 Map of Jerusalem and the West Bank showing the Israeli settlements in the area, including the E-1 zone where Israel plans to build thousands of settler homes.

In an effort to prevent Israeli building in E1, the Palestinian nongovernmental organization the Popular Struggle Coordination Committee organized a group of Palestinians – as well as Israeli and other foreign activists – to head to the area to build a village, which they have called Bab Alshams (“Gate of the Sun”).

They built it on a section of E1 land which they say belongs to the neighboring village of a-Tur, Jerusalem’s a-Tur neighborhood on the Mount of Olives.

Palestinians over the weekend hailed the establishment of a new “village” as a turning point in the conflict with Israel and a step that would pave the way for Palestinian independence.

Chief PLO negotiator Saeb Erekat said Bab Alshams was built to salvage the two-state solution at a time when Israel was trying to “destroy” it.

“Israel must choose between settlements and peace,” Erekat said. “The two can’t go together.”

PLO official Hanan Ashrawi said, “This initiative is a highly creative and legitimate nonviolent tool to protect our land from Israeli colonial plans. We have the right to live anywhere in our state, and we call upon the international community to support such initiatives, as well as to protect those who are being threatened by Israeli occupation forces for exercising their right to peaceful resistance against the illegal Israeli occupation.”

One of them, PA Labor Minister Ahmed Majdalani, complained that the IDF confiscated his Israeli-issued VIP card.

Erekat, Ashrawi and PA Social Welfare Minister Majida al-Masri were also prevented from entering Bab Alshams. Still scores of Palestinians joined the activists on Saturday after avoiding checkpoints by leaving the road and hiking up the hill.

According to Popular Struggle Coordination Committee spokeswoman Abir Kopty, famed Lebanese writer Elias Khoury, author of the epic novel Bab Alshams (Gate of the Sun) after which the village is named, phoned the residents earlier today to express his support.

“You have revived Bab Alshams,” he said. “I wish I were there with you.”

Kopty added that many Israeli security personnel were already stationed nearby.

Both she and the group’s attorney, Tawfiq Jabareen, said that the land was private Palestinian property.

According to the Civil Administration for Judea and Samaria, the land belongs to the state. It noted that the tents were pitched without permits and as such it issued eviction notices there on Friday.

Jabareen said that in his petition to the High Court for an injunction, which he was granted, he argued that the property had been misclassified as state land.

He added that he had heard from the media that the state was now appealing that injunction.

On Saturday night, MKs Michael Ben-Ari and Arieh Eldad, who are running for reelection with the Strong Israel party, said that unless the outpost was taken down over night, they planned to head to the area on Sunday to hold an election meeting. They called on Netanyahu to stop talking, and to start building in Judea and Samaria.