Where are they building in east Jerusalem?

Here is a snapshot of recent major projects in Jerusalem’s controversial ring neighborhoods from the past year.

By MELANIE LIDMAN
DECEMBER 4, 2012 18:01
Har Homa neighborhood of Jerusalem 370
(photo credit: Ronen Zvulun/Reuters)
Advertisement
There are 11,983 to 12,670 Jewish apartment units in some stage of the approval process in east Jerusalem, according to left-wing activist and Jerusalem researcher Danny Seidemann, from the Terrestrial Jerusalem organization.For purposes of comparison, this number is about a quarter of the number of existing Jewish apartments in east Jerusalem.Major projects under discussion in Jerusalem’s ring neighborhoods are: Slopes of Gilo
Slopes of Gilo has two major projects undergoing the approval process – Slopes of Gilo South (1,000+ housing units) and Slopes of Gilo West (797 units). The projects will expand the Gilo neighborhood to the southwest in the direction of Beit Jala and Walajeh.Prime Minister Binyamin Netanyahu visited Gilo in October, when the EU condemned the Local Planning Committee’s final approval of the Slopes of Gilo West, which is awaiting the publishing of tenders. The Slopes of Gilo South is being discussed in the District Committee.Har Homa C
Left-wing activists see Har Homa as one of the most controversial Jewish neighborhoods in the capital, because it was started after the Oslo Accords were signed and because it creates a barrier of Jewish homes between east Jerusalem Arab neighborhoods and Bethlehem. Har Homa C is located outside the existing Har Homa, expanding the neighborhood to the southeast. The Israel Lands Administration published the tenders for the 930 units in Har Homa C in late 2011.Pisgat Ze’ev and Ramot
On November 6, the ILA published tenders for 607 apartments in Pisgat Ze’ev and 606 for Ramot. Issuing the tender is one of the final steps in the approval process. The 1,213 units in Pisgat Ze’ev and Ramot bring the total for tenders in east Jerusalem to 2,366 in 2012. That is more than twice as much as all of the units for which tenders were issued for east Jerusalem in the previous three years. From 2009 to 2011, tenders were issued for 1,145 Jewish apartments in east Jerusalem, according to Terrestrial Jerusalem. 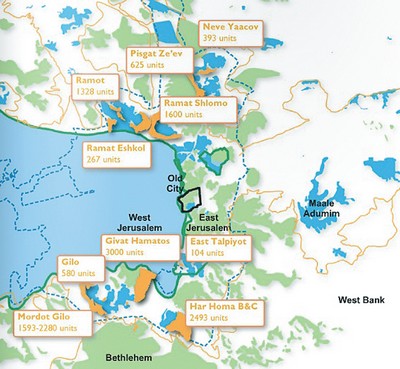 Ramat Shlomo
The interim approval for 1,600 housing units that ignited the Biden fiasco in 2010 will be discussed again on December 17, when the District Planning Committee will discuss public opposition to the project.The District Planning and Construction Committee last discussed the project in August 2011, during the height of the social justice tent protests, when Interior Minister Eli Yishai trumpeted the project as a way to build affordable housing for young people. The project has now been under discussion in the District Committee for two-and-a-half years.Givat Hamatos
On December 19, the Local Planning Committee is expected to give its final approval for a new Jewish neighborhood in southeast Jerusalem called Givat Hamatos, the first completely detached new Jewish neighborhood over the Green Line since the construction of Har Homa in 1997.The neighborhood’s four stages will eventually have 4,000 apartments as well as a hotel. Approximately 800 of the housing units are earmarked for Arabs and will be located inside Beit Safafa. Leftwing activists consider the new neighborhood especially problematic because it will cut Beit Safafa off from Bethlehem. The first stage of the neighborhood, which is likely to be approved in two weeks, will have 2,610 units.
Advertisement
Subscribe for our daily newsletter