Elroy: "Please come to work in Israel, invest in Israel, buy from Israel, sell to Israel.” 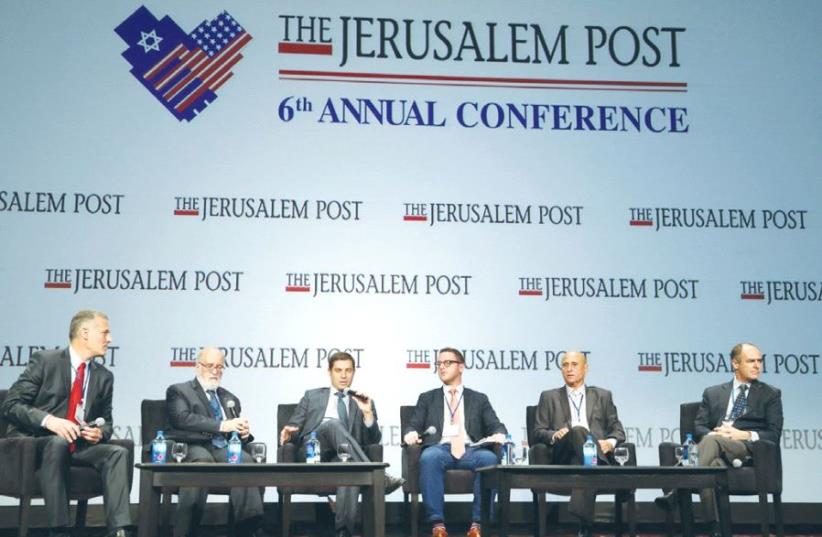 PARTICIPANTS IN THE conference economic panel (from left): Yaky Yanay, CEO & president of Pluristem Therapeutics; Prof. Isaac Ben-Israel, member of EMET Prize Award Committee; Bini Zomer, Israel country manager, Noble Energy; moderator Dr. Efraim Chalamish; Nissim Zioni ,founder & CEO of Pitchon-Lev
(photo credit: SIVAN FARAG)
Advertisement
As Israeli entrepreneurs continue to make waves in the global hi-tech community, the country must aim to increase exports by 30% by 2020 and decrease the domestic cost of living, an Economy Ministry official stressed at Sunday’s Jerusalem Post Annual Conference.“When you have a critical mass, then it’s worth continuing investments in order to create industry in Israel,” said Inon Elroy, economic minister to North America at the Israel Trade and Economic Office in New York.“Please come to work in Israel, invest in Israel, buy from Israel, sell to Israel.”Elroy was speaking at a panel discussion titled “The Middle East’s Economy in the Trump Era” that was moderated by international economic law and business scholar Dr. Efraim Chalamish.Exploring how Israelis have grown to become global leaders in sectors like cybersecurity, energy, space and mobility, Elroy and his fellow panelists presented some of the country’s greatest economic achievements as well as the challenges ahead.Maj.-Gen. (res.) Prof. Isaac Ben-Israel, a military scientist and an award committee board member for the EMET Prize for Art, Science and Culture, attributed Israeli start-up success to the country’s multifaceted ecosystem that combines compulsory military service with academics and commercial opportunities.“We are called start-up nation, cyber nation,” Ben-Israel said. “The real secret around this is the talent that moves from one community to the other.”One community that continues to attract more talent is the biotechnology industry – a sector that boasts some 700 companies in Israel, according to Yaky Yanay, CEO and president of Pluristem Therapeutics.“Israel is on the way to becoming the biotech nation,” he said.While Israel’s economy may be thriving, one panelist urged caution as the country moves forward. Despite the OECD forecasting continued growth for Israel in 2017, it also reported that it has the highest rate of poverty among Western nations, warned Nissim Zioni, founder and CEO of Pitchon-Lev, a nonprofit group that fights poverty in Israel.“This is dissonance, this is not balanced,” Zioni said.“This is one of the biggest problems in Israel.”When Zioni founded Pitchon-Lev in 1998, some 100,000 Israelis were living below the poverty line – a number that has jumped to 1.8 million today, he explained.“Even though we know Israel faces security threats, we believe it’s the responsibility of the government to solve the problem of poverty,” Zioni said. “The government must take responsibility to take care of poverty.”Another way to curb poverty in Israel is to boost local job availability – a goal that Houston-based Noble Energy has taken to heart, as the company leads the development of Israel’s gas sector.Thus far, the firm has hired 180 Israelis, according to Bini Zomer, Israel country manager for Noble Energy."Really the best thing we do in israel and the best thing we can do for the economy and bring people out of poverty is develop our core business,” Zomer said.