Lauder: Antisemitism and anti-Zionism are one in the same 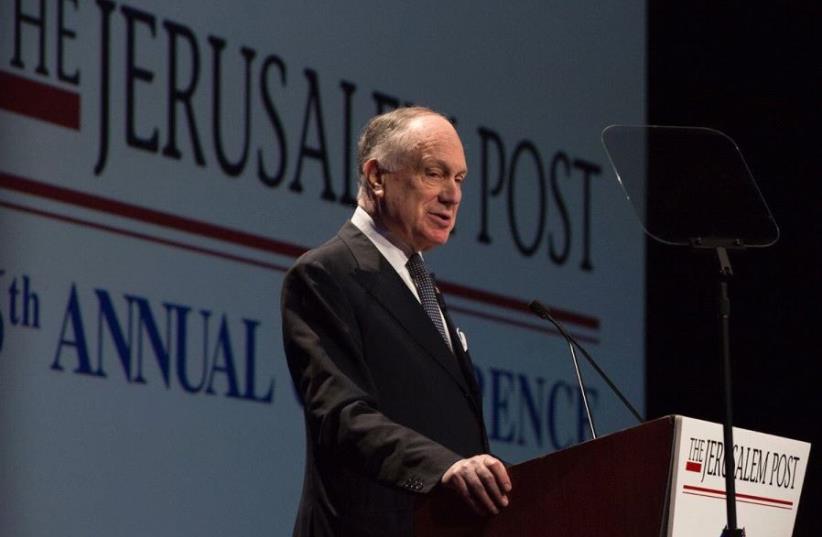 Ronald S. Lauder at the 2017 JPost Annual Conference .
(photo credit: NOA GRAYEVSKY)
Advertisement
In a powerful speech at The Jerusalem Post annual conference in New York on Sunday, World Jewish Congress President Ronald S. Lauder presented a clear message to Boycott, Divestment and Sanctions activists and Israel haters everywhere: anti-Zionism and antisemitism are one in the same.“Being anti-Israel is being antisemitic, plain and simple,” Lauder said, pointing to the latest UNESCO vote that denied Jewish ties to the Temple Mount, and to rising levels of antisemitism on college campuses.Lauder argued that anti-Zionism is antisemitism in a new form, one that has emerged in recent years.“There’s also something new, antisemitism that tries to hide itself and anti-Zionism. People who want to destroy the world’s only Jewish state – having failed to destroy Israel militarily and economically – are now trying to destroy Israel politically and morally,” he said.To combat these threats, Lauder laid out his organization’s three-pronged plan to combat these issues.“The World Jewish Congress has a plan to meet these challenges. We at the WJC created three new divisions that are hard at work to defeat this new form of antisemitism. These efforts will form an ‘iron dome’ to defend Israel against anti-Semitism,” he asserted.To that end, the WJC has launched a communications department to enable Jews in being “proactive and aggressive” against “enemies who define us.”The organization has also assembled a team of top-tier lawyers to actively promote legislation against BDS, an initiative that has already seen some progress, with 19 states in the US passing anti- BDS laws.As the third part of its plan, the organization is working to increase its presence on college campuses, where young Jews are most likely to encounter anti-Israel vitriol.The speech came a day after the New York Times reported that Lauder was pushing US President Donald Trump to broker a deal with the Palestinians.Lauder praised Trump in his remarks. “We have a new pro-Israel American President, Donald Trump,” he said.“A man I’ve known almost 50 years. Let me tell you, Israel has a great and true friend.”