Elections in Gaza and the West bank have not taken place for a decade, but would a new round do any good? 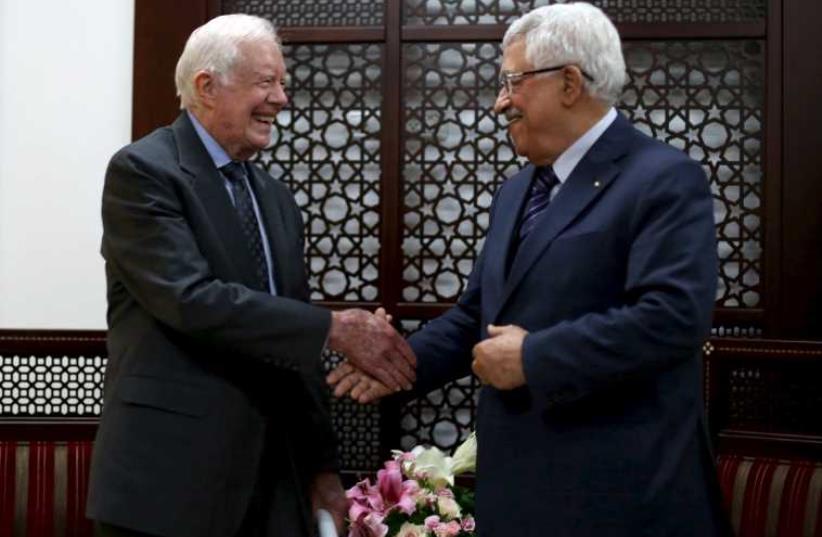 Palestinian President Mahmoud Abbas (R) shakes hands with former US president Jimmy Carter during their meeting in the West Bank city of Ramallah
(photo credit: REUTERS)
Advertisement
Former US president Jimmy Carter has created a stir with his call for Palestinian Arabs to hold elections to end the internecine struggle between Hamas and the PLO in Judea and Samaria (the West Bank) and Gaza.Speaking at a joint news conference with PLO Chairman Mahmoud Abbas in Ramallah, after cancelling his stop in Gaza where he was supposed to meet Hamas leader Ismail Haniyeh, Carter – now a member of the independent Elders Group of global leaders – declared:."We hope that sometime we'll see elections all over the Palestinian area and east Jerusalem and Gaza and also in the West Bank," No Palestinian Legislative Council (PLC) elections have been held in over a decade - even though Abbas's term in office as President expired in January 2009 – a position he continues to fill without any constitutional authority to do so.In 2006 – a year after Abbas was elected as President – Hamas overwhelmingly won the one and only election ever held in Gaza.  The PLO refused to accept its electoral defeat and a year afterward, Hamas violently ousted Abbas's Fatah faction from Gaza and seized control there.Carter’s call can be seen as timely – given the current stalemate in the negotiations between Israel and the PLO and the distinct likelihood they will not be resumed. Indeed one could see Carter’s election call as the most constructive contribution he has made to peace in the Middle East since his following statement in Time Magazine on October 11, 1982 concerning Jordan and Jordan’s late monarch – King Hussein:“Hussein is personally courageous but an extremely timid man in political matters. That timidity derives almost inevitably from the inherent weakness of Jordan. As a nation it is a contrivance, arbitrarily devised by a few strokes of the pen”This viewpoint would be just as applicable in 2015 to Jordan’s current monarch King Abdullah, who is trying to distance himself from any involvement in the future of Judea and Samaria even though Jordan was the last Arab country to occupy those territories between 1948-1967.Elections would enable the long-suffering Arab populations in Gaza and the West Bank to have a say in their future after having been under the tyrannical dictatorships of Hamas and the PLO for almost ten years. Ironically there are those who argue against holding such elections because they are worried that Hamas will again be triumphant – resulting in greater upheaval and unrest than currently exists. Respected commentator and Jerusalem Post Arab correspondent Khaled Abu Toameh puts it thus:“Free and democratic elections are the last thing the Palestinians need now. Such elections would only pave the way for a Hamas takeover of the Palestinian Authority and plunge the region into chaos and violence. As long as Abbas's Fatah faction is not seen as a better alternative to Hamas, it would be too risky to ask Palestinians to head to the ballot boxes.” Toameh presumes that only Hamas and the PLO will contest any such new elections.Given their woeful performances over the last ten years – any such new elections would hopefully spawn the emergence of political parties other than Hamas and the PLO with markedly differing viewpoints and policies – perhaps even parties calling for Jordan to enter into negotiations with Israel to allocate sovereignty of Judea and Samaria and even Gaza between their respective states.Keeping people in a perpetual state of silence by denying them any say in their future is a guaranteed recipe for disaster. When people vote – they bear the consequences of the government they elect. Carter the Elder has spoken. What says Obama the Younger?