So much to be proud of

In honor of TA Pride, a look back at the triumphs and tragedies that have shaped the LGBT community in Israel.

By YONI COHEN
Gay Pride flags 370
(photo credit: Ronen Zvulun / Reuters)
Advertisement
Tens of thousands of people are set to fill the streets of Tel Aviv on June 8 for the annual Gay Pride Parade. While there's a lot to be proud of, the gay community in Israel hasn't always enjoyed such freedom. As with Israel's general history, the gay community has had its fair share of triumphs and tragedies over the years. Only in the past 25 years have significant changes taken place, both in terms of the introduction of new laws as well as a shift in attitude among the general public, allowing Israel to become internationally recognized as a beacon of freedom in a troubled region. A look back at the last 25 years and the events that have shaped the gay community give an idea of why so many people come out year after year to take part in the pride celebrations.Although gay rights movements around the world began to form at the end of the 1960s, it wasn't until 1975 that the first Israeli LGBT Association (The Aguda) was founded, giving the gay community an official body and framework in which to operate.While the Supreme Court ruled in the 1960s that the law banning acts of same-sex sexual activity should not be applied to acts between consenting adults in private, the Knesset only formally repealed the ban in 1988. The move caused outcry from religious politicians at the time but they did not succeed in having the decision changed.The next major turning point came in 1993, when the Knesset ruled that gay, lesbian and bisexual soldiers could serve openly in the army, putting them on a level playing field with their heterosexual counterparts. This was a significant change from the original policy, which viewed homosexuality as a mental illness. A number of openly gay soldiers have reached very high ranks within the army and many continue to serve in the most elite IDF units.

Click for special JPost featuresWith equality in the military was achieved, national airline El Al got on board a year later in 1994. After a high profile case, the Supreme Court ordered El Al Airlines to grant a free plane ticket to the partner of gay flight attendant Jonathan Danilowitz, as the airline had long done for heterosexual partners of employees. Judge Aaron Barak led the High Court in forcing the airline to grant Danilowitz's boyfriend the complimentary ticket in a case that was seen as a breakthrough in gay rights.The organization and popularity of Tel Aviv gay pride parades over the past few years may make it seem as if the city has been open to it for some time, but the first official pride party was only held in 1998. Smaller events were held in 1993 and 1996 but the 1998 march was the first public event with a significant number of participants. Just over 2,000 people marched from Rabin Square to Independence Park in the north of the city in what was a relatively understated event compared to today's scale. Since then, the event has grown in popularity and size with an estimated 100,000 people taking part in the parade in 2011, including a number of foreign tourists.The year 1998 was important for the gay community in Israel, specifically the transgender community, which had been almost silent in public until then. This milestone didn't take place in Israel; in fact it was in England where transgender music star Dana International won first place for Israel in the Eurovision Song Contest. The victory was hailed by the gay community as a success and even Prime Minister Binyamin Netanyahu, then in his first term, congratulated the star on her accomplishments.While 1998 was mainly a time to celebrate, an important protest took place in the summer that would later become known as "the Wigstock Riots." A heated protest broke out near Tel Aviv's Independence Park at a festival for drag queens called Wigstock that raises money for AIDS services in Israel. The trouble started when police attempted to shut down the event being held on a Friday night as Shabbat was beginning, on the grounds that they did not have a permit to hold the event during Shabbat. The protesters, who blocked traffic on Hayarkon Street for a couple of hours, were angry that the police were trying to end the event early. Police used force to disperse the crowds, an act that was seen by many as excessive because the protest was considered peaceful. The crowds finally left the scene but debate about how police dealt with the incident continued long after as many within the community saw it as coercion. It was later revealed that there was a bureaucratic mix-up and organizers had received a permit from Tel Aviv Municipality to allow the event to continue until 8 p.m., however the police permit only ran until 7 p.m.From 2000 onward, the county was preoccupied with the Second Intifada and the gay rights movement slowed down after achieving so much in the 1990s.The next major breakthrough came in November 2005 when the Supreme Court ruled that lesbian spouses could officially adopt the other partner's child. This was a milestone in the recognition of same-sex couples. While gay marriage is not yet legal in Israel, same-sex couples who get married abroad can have their marriage recognized by the state. While pride events in Tel Aviv had been in the spotlight from the late 1990s, in 2005 the Jerusalem parade gained international coverage when the event turned violent due to protests by religious residents who opposed the event. Three marchers were stabbed as they took part in the parade by a demonstrator who was subsequently sentenced to 12 years in prison. One year later in 2006, the event was again marred by protests from the religious community, when over 2,000 haredim blocked the streets of an ultra-Orthodox neighborhood in an attempt to pressure authorities to cancel the planned parade.Violence once again struck the gay community in August 2009, this time in Tel Aviv. On that warm summer evening a masked gunman walked into the Israel’s LGBT Task Force Bar Noar (Youth Bar) offices and began shooting indiscriminately, leaving two dead and several wounded. The victims were 26-year-old volunteer counselor Nir Katz and 16-year-old Liz Trubeshi. The attack caused public outrage and many top politicians came out with strong condemnations. 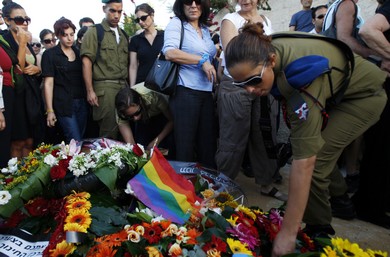 Mourners gather around the grave of Nir Katz (Reuters)On the lighter side, in January 2012 LGBT travel website Gaycities.com named Tel Aviv the best gay city of 2011. The website described Tel Aviv as “the city that never takes a break” and called the LGBT life there “perhaps the most vibrant in the Middle East.” This accolade is just one of the ways in which the gay scene in Tel Aviv has been internationally recognized, with the likes of Time Out and CNN featuring articles and praising the White City for its openness.With more and more people taking part in pride events both in Tel Aviv and Jerusalem, even those who are not specifically part of the LGBT community, this year's celebrations are set to be bigger and better than ever. Despite some of the slightly uglier incidents that have left a bitter taste over the past few years, the gay rights movement in Israel is stronger than ever and there are still many reasons why the rainbow flag will be flying with pride over this year's events. Follow @JPost_Lifestyle