By ELANA KIRSH
Numbers Crunch 311
(photo credit: Mrkay Design)
Advertisement
An unlikely clip went viral in the Orient this week: A video greeting which Prime Minister Binyamin Netanyahu recorded in Chinese garnered over 40 million views. According to Web forum “Your Jewish News,” this figure doesn’t include views on television channels across the populous nation. The project was the brainchild of the Israeli Embassy in Beijing. This is the original version of the clip:In related news, YouTube announced that it is now streaming 4 billion online videos every day. The figured marked a 25 percent increase in the past eight months, according to Google Inc's video website. The company announced that roughly 60 hours of video are now uploaded to YouTube every minute, compared with the 48 hours of video uploaded per minute in May.This week, meanwhile, the most popular online news videos were clips of Egyptians marking one year since the beginning of the uprising which toppled Hosni Mubarak and exposed rifts in the Arab world’s most populous state. YouTube’s newsroom featured a playlist of videos from rallies on the January 25 anniversary.The anniversary also impacted Twitter, not surprisingly considering the crucial role that social media played in the Arab Spring. This graph from Trendistic shows the spike in use of the #jan25 hashtag, which was already visible across the Egypt last week.The topic was still trending the day after the anniversary, with mentions visible not just in Cairo, but also in Alexandria and Port Said. 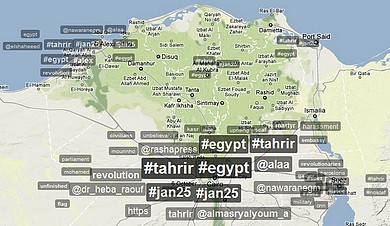 Moving over to international news coverage, the Pew Research Center found that the deadly Costa Concordia crash off the coast of Italy took 26% of news interest in the US in the past week. In second place was the US presidential election. In terms of news coverage, however, the PRC put the election campaign well ahead with 41%, as opposed to 10% on the fatal cruise ship crash.This video of the crash was the third-most viewed news-related video in the US last week, according to the PRC. Those numbers might not mean much, however, as just above in second place was a video edited to make it sound like US President Barack Obama was singing Lady Gaga hit “Born This Way.”Here on JPost.com, over 5,000 readers responded to a poll about US hotel and casino tycoon Sheldon Adelson and his wife donating millions of dollars to Republican presidential hopeful Newt Gingrich’s campaign. The poll results, however, were inconclusive, with over 36% agreeing with the donations, and yet almost 40% saying that one man should not have so much influence.

Staying on JPost.com, the most-read stories on the site veered away from purely Iran-related stories for the first time in months. Jerusalem Post columnist and deputy managing editor Caroline Glick’s column took the top spot on both the site and the talkback forums, and stories on anti-Semitism, hacking and the Iranian nuclear threat filled the rest of the list.
JPost Top Five most-read stories:
1. Column One: Mainstreaming anti-Semitism
2. White House troubled by ‘anti-Semitic think tank'
3. Israeli hackers down Gaza, UAE bank websites
4. Israel to United Nations: Take action against Iran
5. Amano: My duty is to warn of Iran nuclear dangerTalkbackers showed similar interests, though surprisingly there were no Iran stories in the Top Five this week. Instead, stories on regional diplomacy drew comments, as well as Netanyahu’s call for the attorney-general to probe alleged incitement by the Palestinian Authority’s mufti of Jerusalem.JPost Top Five most-active threads:1. Column One: Mainstreaming anti-Semitism
2. HRW accuses Israel of rights violations
3. ‘Thailand recognizes Palestinian state’
4. Israeli hackers down Gaza, UAE bank websites
5. PM to A-G: Investigate J'lem mufti for incitementAnd to wrap up, some stats from the PRC on views on the US president:
• 43% of Americans think Obama is liberal.
• To 37%, he’s “middle of the road.”
• 13% see him as conservative.
These figures have remained largely unchanged since he took office in January 2009.Reuters contributed to this report.From news sites to blogs, tweets to videos, The Numbers Crunch is a weekly column which zooms out and brings you the big picture online, from Israel, the Middle East and around the world, and poll results from JPost.com.The writer is the Internet desk manager at The Jerusalem Post.