By ELANA KIRSH
Numbers Crunch 311
(photo credit: Mrkay Design)
Advertisement
Not surprisingly, riots and looting in London and in other English cities in recent days received significant attention across news and social media online this week. On YouTube, one of the most viewed videos featured on the site’s Trends Dashboard was an amateur clip showing a student being mugged by looters, while he was bleeding from previous injuries. Over two million people viewed the video since it was uploaded last week.On its Breaking News section, the video-sharing site featured a playlist showing volunteers cleaning up after the riots, and Sky News footage of a reporter interviewing looters.Stories about the riots, which started in London and spread throughout the country in the past week, far outnumbered stories on unrest in Syria, especially in the blogosphere. This graph, generated by The Nielsen company’s BlogPulse, shows a sharp spike in blog mentions of the UK story at the beginning of last week, compared to steady Syria citations throughout the past month. 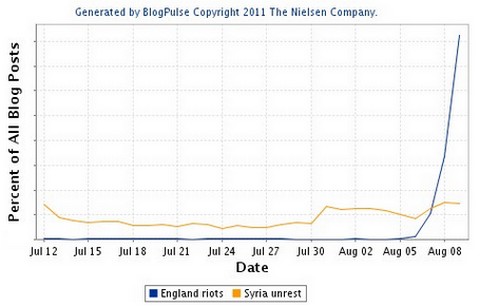 Generated by BlogPulseAcross the blogosphere, 12 of the top 20 news stories cited were related to the riots.The riots ranked high on the Top 5 list on JPost as well, though the story didn’t feature at all on the most active threads list.Top 5 viewed stories in past week:
1. UK: 26-year-old shot in car becomes first riot fatality
2. Editorial: Apology to Norway
3. Cameron okays riot control measures: Nothing off table
4. IDF deploys drones to protect gas fields from Hezbollah
5. Dershowitz strikes back: ‘J Street has harmed Israel’Five most active threads in past week:
1. Editorial: Apology to Norway
2. Our World: Norway’s Jewish problem
3. End all contact with the PA, Lieberman says
4. Ashton: Har Homa housing approval damages peace
5. US ‘deeply concerned’ by new east Jerusalem construction

Interestingly, stories on the prime local issue, weeks of social justice protests sweeping the country, didn’t make it to either list. However, the protest movement’s Twitter hashtag #j14, named for the date when the first tents were set up on Rothschild Boulevard (July 14), was the top trending topic in Israel according to Trendsmap. The movement also recently launched a website, http://j14.org.il, which features a live user chat system, and links to news stories, videos, and information on upcoming events.One of the most shared threads on local social media was a video of the August 6 demonstration in Tel Aviv, which was attended by over 200,000 people, according to media and police estimates. The video features 3,777 images, which were taken between 7 and 11 p.m. on the corner of Tel Aviv’s Ibn Gvirol and Kaplan Streets.According to recent statistics, JPost readers following the protests are predominantly from Israel, and not surprisingly centered in Tel Aviv. Nonetheless, respondents to a JPost quick poll were skeptical about whether the protests would yield results. An overwhelming 43 percent thought that the campaign would be forgotten when security issues inevitably reemerge as top priority, though 22% believe the protests will force the government to make sweeping economic reforms.

Poll resultsIn the US, meanwhile, the country’s economy dominated the news, leaving unrest in the Middle East trailing for the first time in months. The PEJ News Coverage Index cited 45 percent of the weekly newshole going to stories on the economy, and to just 7% on the Middle East, which included both the ongoing violence in Syria, and the beginning of deposed Egyptian president Hosni Mubarak’s trial.From news sites to blogs, tweets to videos, The Numbers Crunch is a biweekly column which zooms out and brings you the big picture online, from Israel, the Middle East and around the world, and poll results from JPost.com. The writer is the Internet desk manager at The Jerusalem Post
Advertisement
Subscribe for our daily newsletter