By LAHAV HARKOV
weekly schmooze 311
(photo credit: Courtesy)
Advertisement
Welcome to twitter, Mel Brooks! The elder statesman of Jewish comedy opened an account on the microblogging network, and invited followers to attend "The 2000 Year Old Man Joins Twitter." He says Carl Reiner made him do it, by the way.

This is my 1st tweet - watch me with @carlreiner &amp; @juddapatow live at 5E/2P for #comedyfest P.S. Carl made me do it. new.livestream.com/comedyfest/mel…
&mdash; Mel Brooks (@MelBrooks) April 29, 2013

For all those Jewish mothers with sons who don't visit, don't call, don't write enough, there's a new (fake) organization to help them out: Adopt a Jewish Mother. The service pairs up nagging moms with non-Jewish volunteers they can shower with guilt.Gwyneth Paltrow is on a press blitz promoting Iron Man 3, and Ellen DeGeneres presented her with a creative challenge on her show this week. Paltrow impersonated singers like "Thrift Shop" stars Macklemore & Lewis, her best friends Jay-Z and Beyonce and husband Chris Martin of Coldplay.Justin Bieber caused an uproar last month when he visited the Anne Frank House in Amsterdam and wrote in the guest book that he hoped Frank would have been a fan of his music. Writer Yoni Brenner imagined in a recent issue of the New Yorker what would have happened if Bieber had been around during World War II. Obviously, he would have single-handedly defeated the Nazis. 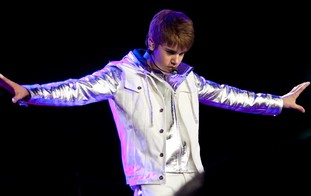 How far will you go to look good on Shabbat? Rorie Weisberg from Monsey, NY, is suing Lancome, because its 24-hour foundation Teint Idole Ultra 24H does not last throughout the Sabbath, The New York Post reported this week. According to Weisberg, Lancome is guilty of false advertising.If you have any news to share with The Weekly Schmooze,write to: [email protected]
Advertisement
Subscribe for our daily newsletter