By LAHAV HARKOV
weekly schmooze 311
(photo credit: Courtesy)
Advertisement
This year's big TV winners at the Golden Globes both have a Jewish connection – Lena Dunham and Girls, and Homeland, based on Israeli show Hatufim.Dunham had an interesting person to thank when she won Best Comedy: actor Chad Lowe. In 2000, Lowe's then-wife Hilary Swank forgot to thank him when she won a Best Actress Oscar for Boys Don't Cry, and in August, the Girls writer-director-star promised she would thank him if she got the chance.

@ichadlowe What a day-maker you are! FYI I will probably mention you if I ever receive any award at all in my lifetime (and I too am a fan.)
&mdash; Lena Dunham (@lenadunham) August 7, 2012

At first, Dunham didn't thank Lowe when she won Best Actress in a comedy, but then she remembered (after shouting "BAAAAAH" into the microphone):Lowe was very grateful:

Meanwhile, a film is in production that is sure to be nominated for some Golden Globes – or maybe so Razzies – Hebrew Hammer vs. Hitler, a sequel to the Blaxsploitation film parody The Hebrew Hammer. Creator Jonathan Kesselman is trying to raise money to produce a sequel set 10 years in the future, in which The Hebrew Hammer, portrayed by Adam Goldberg, goes back in time to kill Hitler.The Hebrew Hammer crew also offered a glossary of "Street Yiddish" terms for those who aren't in the know. 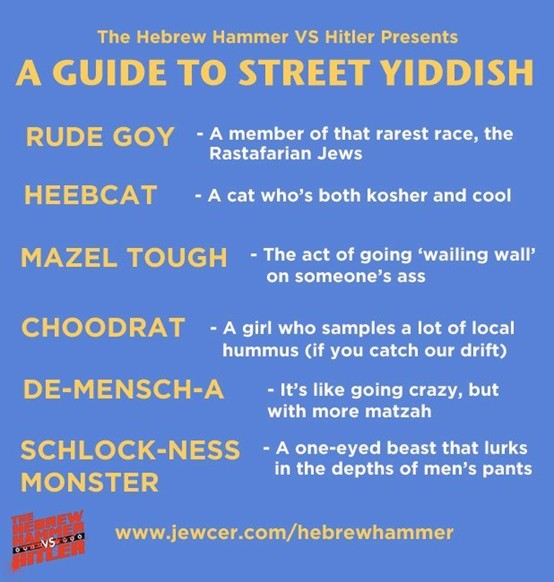 (Courtesy: Hebrew Hammer)For those of you looking for comedy that is more likely to see the light of day, SNL favorite Andy Samberg is starring in a pilot for FOX. The show will be about New York detectives, and is written by the "Parks and Recreation" team, Dan Goor and Mike Schur. 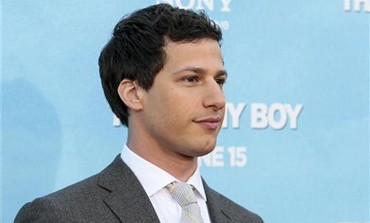 Andy Samberg. Photo: REUTERS.Mel Brooks has written two Broadway shows – "The Producers" and "Young Frankenstein" – and may be bringing another beloved film to the Great White Way: Blazing Saddles. After watching Django Unchained, Brooks said "I think I'm in the clear; I don't look so bad." Meanwhile, here's a Django-Blazing Saddles mash-up.If you took the Jerusalem Light Rail on Sunday, and noticed some young men and women in their underwear, you weren't hallucinating. It was the Jerusalem version of the 12th annual No-Pants Subway Ride, which began in New York, and has been adapted in 60 different cities. Tablet Magazine has a slide-show of the pasty, pantsless Jerusalemites.The Weekly Schmooze collects the hottest Jewish culture news from around the world. Ranging from celebrities to philanthropy to quirky communities, we're here to schmooze about Jews.If you have any news to share with The Weekly Schmooze, write to: [email protected]