A glimpse into historical moments in Israeli news from this week in 'The Jerusalem Post' front covers. 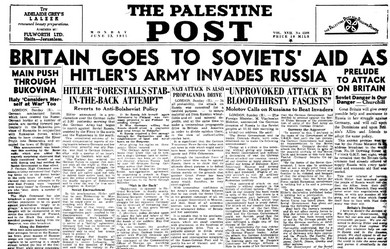 "Britain will give every possible help and assistance to Russia in her struggle against Germany, and will call upon the Dominions and upon Britain's allies and friends to adopt the same policy." This was the promise made by British Prime Minister Winston Churchill June 22, 1941, in the face of Adolf Hitler's invasion of the Soviet Union during World War II, also known as Operation Barbarossa. This was one of the largest invasions in military history and  had grave consequences for Russia. 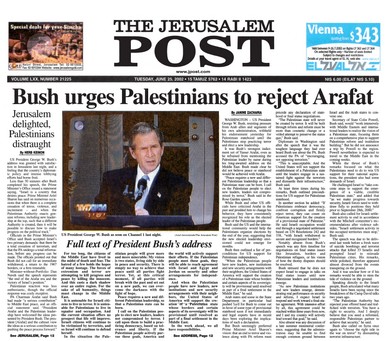 On June 24, 2002, when Yasser Arafat was the Palestinian Authority chairman,  US President George W. Bush called on Palestinian people to elect new leaders, who were "not compromised by terror." Resisting pressure from Arab allies and segments of his own administration, Bush withheld an endorsement for Palestinian statehood, saying "peace requires a new and different Palestinian leadership so that a Palestinian state can be born." Arafat continued in office until November 2004, when he passed away. 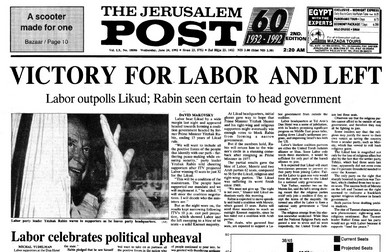 On June 23 1992, the Labor party made a come-back after 15 years of Likud rule. The Left's victory put Yitzhak Rabin in the prime minister's seat for the second time, after his first term in office between 1974 and 1977. The coalition was the twenty-fifth government of Israel and in addition to Labor was comprised of Meretz and Shas. Arab parties Hadash and the Arab Democratic Party supported the government but did not join it. Shas left the coalition in 1993, but a short-lived party called Yiud joined it. Rabin was assassinated by Jewish extremist Yigal Amir in 1995; Shimon Peres took over as interim prime minister and went on to form the 26th government.
Advertisement
Subscribe for our daily newsletter