This Week in History: Sadat comes to Jerusalem

Sadat flies from Cairo to Israel to deliver one of the most historic speeches to be delivered at Knesset.

By MICHAEL OMER-MAN
Sadat, Carter, Begin_150
(photo credit: Couretsy the Jimmy Carter Library)
Advertisement
On November 20, 1977, then-Egyptian president Anwar Sadat flew from Egypt to Israel to give one of the most historic speeches ever to be delivered at the Knesset. The visit had been arranged less than one week earlier and would set in motion a series of events and negotiations that led to the first peace treaty signed between Israel and an Arab state.Having restored Egyptian and Arab pride four years earlier with victories in the earlier part of the Yom Kippur War, Egypt’s second president had for years been making small gestures indicating that he might be interested in peace with the Jewish state. Even before the 1973 war, he had said in a speech in Cairo that he would be willing to visit Jerusalem, although nobody took him seriously at the time.In late 1977, the United States was attempting to organize a peace conference between Israel and Arab states in Geneva, but the initiative had yet to bear fruit. Then, in an interview with American journalist Walter Cronkite on November 14, 1977, Sadat made clearer than ever his willingness to visit Israel’s capital. “I’m just waiting for the proper invitation,” he told the world in the satellite interview.The only condition to his visit, the Egyptian president said, “is that I want to discuss the whole situation with the 120 members of the Knesset and put the full picture and details of the situation from our point of view.”Cronkite, who at that point was not only breaking, but enabling one of the biggest stories in the short histories of Israel and the modern Egyptian republic, interviewed then-prime minister Menachem Begin later the same day. Asked for his reaction to Sadat’s statements, Begin told the CBS journalist: “I can assure you, Mr. Cronkite, as we really want the visit of President Sadat, we really want to negotiate the peace, to establish permanent peace in the Middle East.”Begin continued: “Any time, any day he's prepared to come, I will receive him cordially at the airport, and go together with him to Jerusalem, also present him to the Knesset and let him make his speech to our parliament. I will follow him onto the platform and greet him, receive him.”By making the statements on international television and not via secret cables passed through foreign diplomats, the two leaders essentially made a public commitment to the world to hold the unprecedented meeting in Jerusalem. Six days later, Sadat arrived at Lod Airport, was received by Begin, and the two drove together to the Knesset.Addressing the 120 Knesset members, the Egyptian president declared that he had come to Israel not to conduct another withdrawal of forces agreement or make a partial peace. “Today I tell you, and declare it to the whole world, that we accept to live with you in permanent peace based on justice,” Sadat said in his speech.But Sadat’s speech also emphasized another issue, which he characterized as inseparable from Israeli-Egyptian peace – the fate of the Palestinians.“The Palestinian problem is the core and essence of the conflict and that, so long as it continues to be unresolved, the conflict will continue to aggravate, reaching new dimensions. In all sincerity, I tell you that there can be no peace without the Palestinians. It is a grave error of unpredictable consequences to overlook or brush aside this cause,” he told the gathered MKs and dignitaries.Resolution of the Palestinian issue would later be included in the agreement signed between the two countries (as it was also included in the Israel-Jordan peace treaty), although the treaty brought the resolution of that conflict no closer.The Egyptian president’s visit to Jerusalem and his speech to the Knesset would serve as the start of a process that lasted 16 months before a peace treaty, brokered by US president Jimmy Carter, was eventually signed by Begin and Sadat on the White House lawn on March 16, 1979. 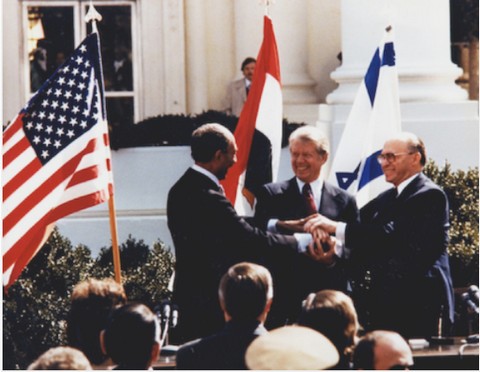 (Photo: Courtesy of The Jimmy Carter Library)Although peace has provided benefits to both countries, Sadat faced anger both at home and throughout the Arab world for what was perceived as a betrayal of the united pan-Arab front against Israel that his predecessor Gamal Abdel Nasser designed. Upon inking the deal, Egypt was expelled from the Arab League, which removed its offices from Cairo. Only ten years later would the Arab League readmit Egypt and return its headquarters to its capital.Sadat would also pay the heaviest personal price for making peace with Israel. To some in Egypt, Sadat had betrayed Islam and the Arab peoples. In October 1981 several Islamist members of his army assassinated him for signing the deal two years earlier.Peace between the two countries has lasted despite the obstacles it has since faced. Although described by some as a “cold peace” due to the hostilities and suspicions that still exist among the two peoples, few can deny that even if the peace is only on paper, it has brought stability to the region. Since Anwar Sadat arrived in Jerusalem in 1977, neither state has been drawn into a war as deadly or existential as those of 1948, 1956, 1967 or 1973.