Daka was 24 years old when he was arrested for being part of a terror cell responsible for kidnapping and murdering Israeli soldier, Moshe Tamam in August 1984.

By HADAS PARUSH
Walid Daka
(photo credit: Hadas Parush)
Advertisement
Walid Daka was 24 years old when he was arrested for being part of a terror cell responsible for kidnapping and murdering Israeli soldier, Moshe Tamam in August 1984.Pictures of imprisoned Walid hang on the walls of the Daka family home in Baka Al Gharbiya, where his brother, Assad sits next to his aging mother and describes how the family has been waiting for his release for 27 years. "We fantasize how he will see the world and everything," Assad said. "We fantasize about the fact that the man spent 27 years in a cell, even at night he never saw stars, 27 years he didn't see stars, not the moon, was never outside his cell at night. Imagine that. My mother, her whole fantasy is to see him, to hold him, before she passes away." The Daka family has already faced disappointment when he was not released in the Gilad Shalit prisoner exchange deal in 2011. With renewed peace efforts between Israel and the Palestinian Authority, Walid is now on the list of 104 Palestinian and Israeli Arab prisoners to be released.Assad said his brother was not present at the kidnapping and murdering of the soldier, and that in fact he was against it. Now serving a life sentence, Walid has over the years completed two degrees in politics and democracy, and has written about his world view which Assad says values human life over land. When asked about the widespread rejection of the decision by many of the bereaved Israeli families, Assad said he understands their pain. 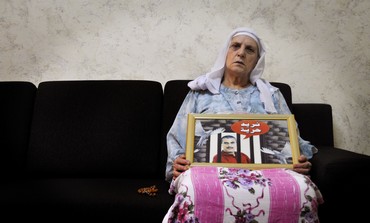