All the cabinets are packed and I'm ready to cook

With all the Pessah cleaning and shopping done, here are some innovative recipes to mix things up a little.

By ELIZABETH KURTZ, GOURMETKOSHERCOOKING.COM
balsamic chicken 311
(photo credit: whatscookingamerica.net)
Advertisement
You can’t avoid it any longer. The cleaning is done, the shopping is done, the Seder is coming – it’s time to cook!  Here are some new recipes to help get you in the mood.  It is nice to mix it up a little – some more traditional fare and some newer ideas.  You already have the traditional fare so here are some innovative ideas.Moroccan Haroset Balls with Dates, Raisins, and Nuts
Makes approximately 60 or 3½ cups (P) 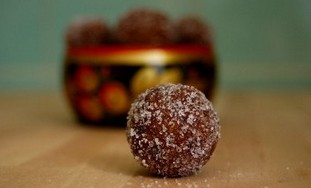 Rosa2 cups pitted dates
½ cup golden raisins
1/2 cup dark raisins
½   cup walnuts
1 to 2 tablespoons sweet red wineProcess the dates, raisins and walnuts in a food processor until the mixture is finely chopped and begins to stick together.  Add enough wine to make a sticky mass.Line a baking sheet with waxed paper. Drop slightly rounded measuring teaspoonfuls of the mixture onto the lined sheet.  Roll each mound with moistened palm into hazelnut-size balls.  Refrigerate for at least 3 hours or until firm.
Fish Terrine4 sole fillets, skinned and cut in halves
oil
2 medium onions, cut into eights
4 small carrots, peeled and sliced
1 celery rib, sliced
1 pound ling cod or other white-fleshed fish fillet, cut into 1-inch cubes
3 eggs
½ cup cold water
salt
freshly ground black pepper
1 pound salmon fillet, cut into ½-inch chunks
Lettuce leaves
Horseradish-tomato mayonnaiseSoak the sole fillets in cold water for 15 minutes. Drain and pat dry. Place them between sheets of wax paper and flatten lightly with a mallet or the side of a knife.  With a sharp knife, make several slashes on the skin side of each fillet.
Lightly oil a 2-quart glass baking dish and line it with wax paper.  Oil the paper. Line the entire baking dish with the sole fillets, placing them skin side down and slightly overlapping. Cover with plastic wrap and chill in the refrigerator for 30 minutes.
Place the onions, carrots, and celery in a processor or grinder.  Process or grind until finely minced.  Add the cod and halibut and process until well blended.  Add the eggs, 1 at a time, alternating with the water.  Blend well.  Season to taste with salt and pepper.Transfer the ground mixture to a large bowl. Gently fold in the salmon chunks.  Spoon the fish mixture over the sole fillets in the prepared baking dish.  Cover with oiled wax paper and a double layer of foil.Preheat the oven to 350 degrees.  Place the terrine in a large baking pan and pour in hot water to come halfway up the sides.  Bake for 50 minutes, or until a knife inserted in the center comes out clean.  Cool on a rack 10 minutes.Balsamic Chicken with Pears and Cherries
Serves 66 chicken breast halves, boneless and skinless
Kosher salt and freshly ground pepper
1 tablespoon extra virgin olive oil
1 shallot, chopped
2 medium pears, peeled, cored, and sliced
1 cup chicken broth
1/4 cup good quality aged balsamic vinegar
2 tablespoons sugar
2 teaspoons potato starch
1/4 cup dried tart cherriesPound chicken breasts to a uniform thickness of 1/2-inch. Season with salt and pepper on both sides.In a large frying pan over medium-high heat, add the olive oil. Add the chicken and brown on both sides; turning once, about 3 – 4 minutes each side. Remove from heat and transfer to a platter, cover, and keep warm.To the same pan, add the shallots and sauté over medium high heat for 2 minutes until soft. Add the pears, continue cooking, stirring occasionally for 3 – 4 minutes, until the pears are soft and golden brown. In a separate bowl, combine chicken broth, balsamic vinegar, sugar, and potato starch. Pour over the pear mixture; add the cherries. Increase heat to high and simmer, stirring frequently for 6 – 8 minutes until the sauce thickens slightly. Return the chicken and juices to the pan. Bring the mixture back to a simmer; decrease heat to medium. Cook for 10 minutes. Taste and adjust the seasoning if necessary. Remove from heat. Maple Baked Onions
Finally something easy!6 large red onions, sliced
¹/3 cup pure maple syrup
¼ cup margarine, melted
Preheat oven to 425 degrees.  Layer onions in a greased 9 x 13-inch pan.  Pour syrup and margarine over onions.  Bake, uncovered, for 45 minutes.