Latkes on a different level

The classic latke recipe might bore you, so here are some new ways to make your favourite Hanukka snack.

By OURMETKOSHERCOOKING.COM
DECEMBER 9, 2012 16:31
Latkes
(photo credit: Courtesy)
Advertisement
Recently I wrote an article on www.gourmetkoshercooking.com on how to store leftover latkes so that they would rewarm well and not retain a greasy, leftover taste.  It actually humors me today because we never have leftover latkes. No matter how many latkes or types of latkes, they are eagerly snatched up and eaten before the next batch is even ready.  During Hanukka, we spend a lot of time grating and frying and sampling latkes of all kinds. The kitchen smells amazing, the aprons are dirty and the guests are very happy.  Try some of these or submit your favorite latke recipe so we can share in the yumminess. 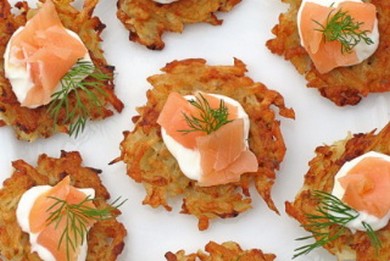 10 potatoes, peeled and cut into chunks
1 onion, peeled and cut into chunks
4 eggs
½ teaspoon pepper
1-1/2 teaspoons salt
2 cups sliced smoked salmon
Capers for garnish
Parvesour cream or regular sour cream
Spicy Mayonnaise (recipe follows)
Oil for fryingIn a food processor, using the grater blade, grate the potatoes and onions. Pour into a strainer and strain the extra liquid. In a large bowl, mix the potato-onion mixture with the eggs, salt and pepper. Heat oil in a large frying pan. When oil is hot, place small spoonfuls (about 2 tablespoons each) of the potato mixture in the pan and flatten slightly. Cook until crispy (three to five minutes per side) and drain on paper towels.
Can be frozen.If you like traditional latkes serve warm with applesauce or sour cream. For the smoked salmon and spicy mayonnaise, continue.Spicy Mayonnaise 3/4 cup mayonnaise
1 tablespoon fresh lemon juice
1 teaspoon Cajun or Creole seasoning blend or ground red pepper
1/4 teaspoon hot pepper sauce (optional, this adds a lot of heat to the mayonnaise)Mix all ingredients in small bowl. Cover and chillTo Assemble Latkes:
Make latkes. Top with spicy mayonnaise and a slice of smoked salmon. Garnish with capers or parvesour cream or regular sour cream.Olive oil latkes on the lighter side 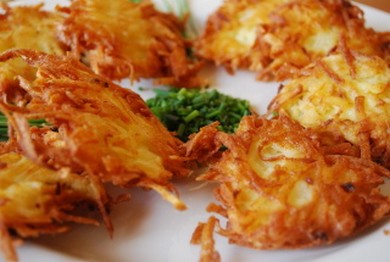 Peel potatoes, rinse, and coarsely shred on a box grater, transferring to a bowl of water as you go. Shred onion into a fine-mesh colander, discarding any uneven chunks. Pour potato mixture on top and drain any excess liquid. Squeeze handfuls of potatoes and onion to remove liquid, drain as much liquid with towels. Wrap and wring well. Whisk eggs, flour, breadcrumbs, salt, and the pepper in dry bowl. Add potato mixture and toss with hands until evenly coated. Preheat oven to 200°.Pour ¾-inch oil into a large frying pan with sides at least 2 inches high. Insert a deep-fry thermometer and heat oil over medium-high heat to 350°.Put about a ¼ cup portion of potatoes on a wide metal spatula, press into a 3-inch cake, and push into hot oil with another metal spatula. Shape three more latkes, sliding into oil; cook, turning once, until browned at edges but still soft in center, about two minutes each side. Adjust heat to keep oil between 300° and 350°.Transfer latkes to paper towels, then to a wire rack over a rimmed baking pan. Sprinkle with salt and keep warm in oven. Repeat to make remaining latkes; use a second pan when the first is full. 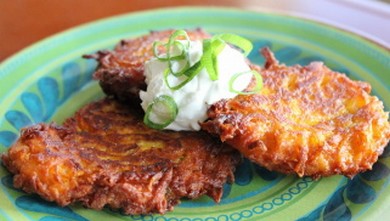 1 pound sweet potatoes, peeled and coarsely grated
2 scallions, finely chopped
1/3 cup all-purpose flour
2 large eggs, lightly beaten
1 teaspoon salt
1/2 teaspoon black pepper
3/4 cup vegetable oilStir together potatoes, scallions, flour, eggs, salt, and pepper.Heat oil in a deep 12-inch nonstick skillet over moderately high heat until hot but not smoking. Working in batches of four, spoon 1/8 cup potato mixture per latke into oil and flatten to 3-inch diameter with a slotted spatula. Reduce heat to moderate and cook until golden, about 1 1/2 minutes on each side. Transfer latkes with spatula to paper towels to drain.Potato, parsnip, and chive latkes
Makes 12 latkesThis recipe is from Israeli chef Tamimi.  It combines potatoes, parsnips and chives.  It tastes like a flavorful latke with a secret twist.  People will not know what the twist is but there won’t be too many leftovers to let them keep guessing.5 1/2 cups peeled and grated fairly waxy potatoes such as Yukon Gold
2 3/4 cups peeled and grated parsnips
2/3 cup chives, finely chopped
4 egg whites
2 tbsp cornstarch
5 tbsp unsalted butter or margarine
6 1/2 tbsp sunflower oil  or other neutral oil like canola or vegetable oil
Salt and freshly ground black pepper
Sour cream or applesauce to serve   Rinse the potato in a large bowl of cold water. Drain in a colander, squeeze out any excess water, and then spread the potatoes out on a clean kitchen towel to dry completely.  In a large bowl, mix together the potato, parsnip, chives, egg whites, cornstarch, 1 teaspoon salt, and plenty of black pepper.Heat half the butter and half the oil in a large frying pan over medium-high heat. Use hands to pick out portions of about two tablespoons of the latke mix, squeeze firmly to remove some of the liquid, and shape into thin patties about 3/8 inch thick and 3 1/4 inches in diameter. Carefully place as many latkes as you can comfortably fit in the pan, push them down gently, and level them with the back of a spoon. Fry over medium-high heat for three minutes on each side. The latkes need to be completely brown on the outside. Remove the fried latkes from the oil, place on paper towels, and keep warm while you cook the rest. Add the remaining butter and oil as needed. Serve at once with sour cream or applesauce on the side.

These recipes were brought to you by www.gourmetkoshercooking.com