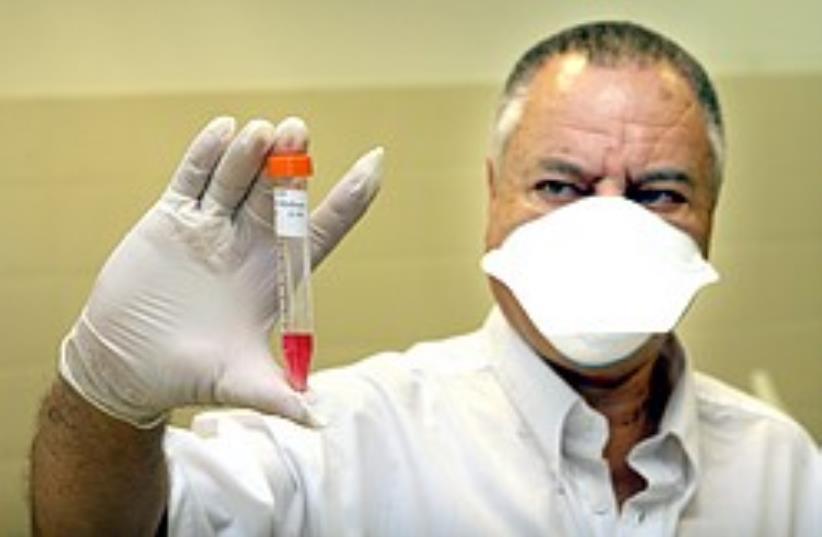 Dr. Arkadi Ozerny with swine flu test kit.
(photo credit: Ariel Jerozolimksi)
Advertisement
There is as yet no vaccine that protects againstH1N1 "swine flu" virus, and Deputy Health Minister Ya'acov Litzmanbelieves there won't be one available anywhere before the fall-winterregular flu season is under way. But Prime Minister Binyamin Netanyahu,who met with Litzman on Wednesday evening, said he had "decided toorder vaccines for all Israeli citizens."
The first trials of H1N1 flu vaccines have begunon healthy volunteers in Australia, where it is currently flu season.About 500 people are participating in the trials conducted by the CSLand Vaxine pharmaceutical companies. As soon as the vaccines are provensafe, they will go on the market.
"This decision places Israel in line with the leading countriesof the world on the issue of future supplies of influenza vaccines,"Netanyahu said in a statement. "In this context, it is important toemphasize that H1N1 vaccines are still undergoing development and arenot yet 'on the shelf.' The vaccines will be delivered to variouscountries, including Israel, only after the conclusion of developmentin a few months."
Meanwhile, a 38-year-old pregnant woman suffering from swineflu was admitted to intensive care at Hadassah University Hospital inJerusalem's Ein Kerem on Wednesday night.
She is the second pregnant woman to havecontracted swine flu in Israel. Pregnant women are in the high-riskcategory of those diagnosed with the virus.
Due to public nervousness about the first death in Israel fromH1N1 flu this week, the prime minister also insisted that the HealthMinistry increase by 5 percent its supply of anti-viral medicationssuch as Tamiflu, even though the state already stores higher rates ofthese drugs than the average European country. Such drugs can reducecomplications among people at high risk who contract influenza but areuseless as preventative medicine, and they are not prescribed lightlybecause they can cause unpleasant side effects.
The cost of the vaccines and anti-virals will reach NIS 450 million.
Netanyahu instructed the Prime Minister's Officedirector-general Eyal Gabai to work with Finance Minister YuvalSteinitz and Litzman on finding sources of financing, and to submit aproposal to an upcoming cabinet meeting. Litzman strongly opposes theTreasury Budgets Division's view that these should be paid for with themore than NIS 400m. allocated to expand the basket of lifesaving andlife-improving drugs for 2010.
Earlier on Wednesday, Litzman said that he did not believe thepurchase was necessary, as the antidote was currently not fully ready.However, he admitted that professionals in his ministry were in favorof the acquisition in light of their prediction that one in fourIsraelis would contract swine flu over the winter.
Speaking on Army Radio, Litzman maintained that Tamiflu was sufficient for dealing with the spreading epidemic.
"There is currently no vaccination going on in Israel," Litzman said.
"We would be prepared to invest a lot of funds into it, butthere is simply no need. And besides, by the time the vaccination wouldarrive, the winter will already have passed."
He addressed fears within the professional ranks of his office,like the worry that if Israel does not hurry up and order thevaccination, the stock will be exhausted by orders placed by otherWestern countries.
"There is no point in putting money into a vaccination withoutdefinite knowledge of its efficiency. While the assessment that manypeople will contract the virus in the winter may prove correct, thereis no need to worry - there are antidotes, and the illness is mild," hesaid.
On Monday, the Health Ministry announced the first patient to die of complications of the H1N1 virus in Israel.
Shimon Azran, 35, an obese smoker, died at Yoseftal Hospital in Eilat over the weekend.
So far, about 1,500 cases - around 30 or 40 new cases a day -have been reported in Israel. Others have gone unreported, with peoplewho feel unwell just staying home and not going to their doctors.
Litzman's ministry is planning a public education campaign forthe autumn to reduce prevalence of the flu and to encourage vaccinationagainst conventional influenza, which could combine with H1N1 virus.
Advertisement
Subscribe for our daily newsletter