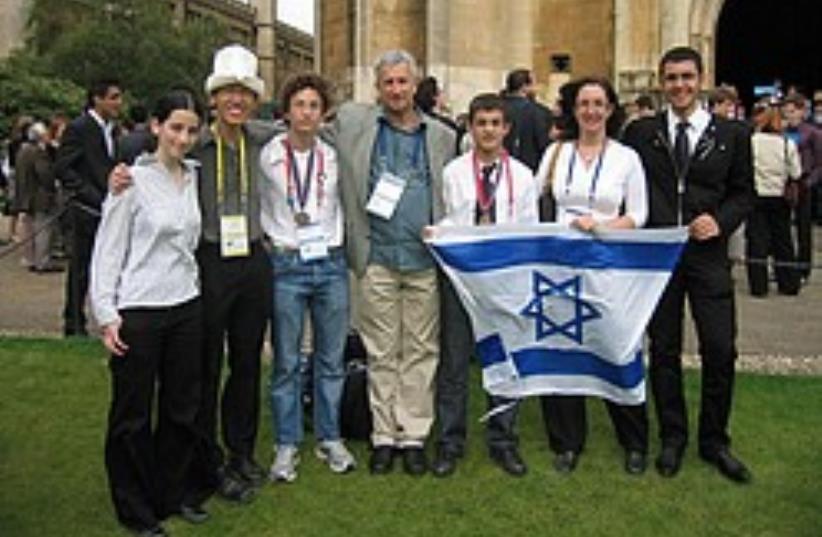 A total of 253 young scientists, making up 65 national teams,took part in the contest, including participants from Iran, Pakistanand Kuwait.

Competitors sat through two challenging examinations, intheoretical and practical chemistry, competing against the bestchemistry students from around the world. Mauda scored the highest markin the practical exam, beating stiff competition from Chinese, Russian,Korea and Iranian participants.

Organizers of the event said the close links andfriendships between the competitors, fostered by the Olympiad, wereevident as the students collected their awards. During the week-longcompetition, participants take part in a wide array of social andcultural events and programs.

The medals were awarded at a grand closing ceremony in thehistoric King's College chapel at Cambridge University on Sunday.Waving an Israeli flag when he accepted his award, Mauda shared with The Jerusalem Post his feeling of pride and achievement.

"It was an experience to meet people from allover the world. Winning a gold medal was a surprise. I didn't realize Iwould do so well; I didn't expect to reach such a high level," he said.

"It is of great importance that we have youngsters who aretalented, creative, curious and hard working, as well as academicinstitutes which are willing to advance such elite groups," said Prof.Asher Schmidt, from the Technion's Faculty of Chemistry and head mentorof the Israeli delegation. "The kids are highly motivated and worktremendously hard to get prepared and participate in thesecompetitions.

"Coming back with extraordinary achievements should fill eachIsraeli with pride. Looking a few years down the road, I can easilyimagine Assaf developing into a leader in a branch of science and/ortechnology, training the new generation of scientists. In my opinion,education, at all levels, is the primary element on which the future ofour state depends. Education should also be addressed as suchnationally, and driven by a team of professionals without politicalaffiliation," Schmidt added.

The achievement of the Israeli youngsters was announced by the captain on their EL AL flight back to Israel.

The Israeli team, which has competed in the Olympiad for thelast four years, is selected and prepared by the Schulich Faculty ofChemistry at the Technion. Participants are chosen following anationally run competition. Financial support is given by the EducationMinistry and the Chais Family Foundation.

The Chemistry Olympiad has been an annual event since 1968. Itsaims are to test the most promising chemistry students while promotingcooperation and the exchange of scientific experience among students.

The competition is facilitated by the ministry of education ofthe organizing country. Each national team consists of students andaccompanying teachers. The students must be from high schools that donot have a special chemistry orientation.

Next year's event will be held in Tokyo.

Rachel Geizhals contributed to this report.