According to rough estimates, there are 2,500 establishments in Israel that offer physical training services and facilities.

By EITAN BARAK
TRAINING IN A GO ACTIVE FITNESS CENTER
(photo credit: Courtesy)
Advertisement
Today keeping fit, looking good and feeling good are quite daunting tasks. Many people are sedentary, as most places of work are thoroughly computerized, which means that employees are stuck behind a desk all day long. What’s more, the Internet enables more and more people to work from home, which means they stay at home, so there is no need to walk or even drive to work. This lack of mobility is harmful to our health, as it can promote obesity, heart disease and the like. One of the ways to regulate weight is by eating nutritious food and doing the right kind of exercise. This can be accomplished by working out in a gym or in the privacy of one’s own home.The health club industry in Israel is highly developed and caters to all needs and most budgets.According to rough estimates, there are 2,500 establishments in Israel that offer physical training services and facilities. These include full-fledged gyms, hotels, country clubs and community centers.But keeping up a training regime is no easy matter.Yaron Sela, general manager of the Great Shape chain of health clubs, says, “Exercising on a regular basis makes people feel better and look better. In these sedentary times, when the average person remains physically inactive for most of the day and the pressures of daily life gets more stressful by the minute, exercising on a regular basis is a way to compensate the body for the lack of activity which is unnatural to the body and therefore harmful to one’s health. It is also a way to relax from the stresses of work,” he says.“A gym is the best way to fulfill the famous Roman maxim ‘Mens sana in corpum sano,’ a healthy mind in a healthy body. The mounting stress of daily life could literally drive one crazy. At a gym, people can relax in a clublike atmosphere, while the physical activity can prevent many hypokinetic-related illnesses, especially those related to heart disease,” says Sela.Physical training within a supportive environment is advisable, but there is an inherent problem. Dropping out 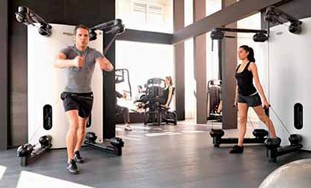 Many people want to look better, but they are not so willing to maintain the effort. One of the biggest problems of gym chains is how to minimize the dropout rate. The turnover of gym members in Israel exceeds 60 percent. This means that 60% of the clients do not renew their membership.What is the reason for such a high dropout rate and how do the managers of health clubs address these problems?According to Eyal Amon, manager of Holmes Place Israel, “The high level of membership non-renewal does not necessarily mean that the number of people who are doing physical training is decreasing; it may mean that they are changing clubs. Some may want to go to a less expensive club or may want to exercise on their own, as they feel they cannot afford the expense or don’t have the time to go to the club. Others may drop out altogether, feeling that they don’t want to exercise anymore. This is a fact of life for us, and we have to adapt to the circumstances,” he says. “From a more technical perspective,” Amon continues, “the dropout level decreases when members see results, especially physical results in that they look slimmer and more toned; when a positive relationship has been created with the instructor; and when a social relationship has been created with other members, especially when exercising in a group. That being said, we try to create the right social ambience to create the necessary relationship between staff and members and to provide the best professional service.”Amon adds that the need to exercise is increasing constantly with lifestyle and with advancing age.“Men and women who want to look and feel fit should be constantly aware of the state of their calorie bank to see whether they have surplus calories or a deficit in calories. Calories are produced by eating, and they are burnt off by physical exercise. Even breathing burns calories. Each excess of 7,000 calories produces one kilogram of fat. Each deficit of 7,000 calories burns one kilo of fat,” he says.Keeping it up
By exercising in a professional facility, it is possible to get expert advice on calorie intake and expenditure and adapt one’s exercise program accordingly. Energy expenditure, or basic metabolic rate, decreases with age, which means it is harder to burn calories. Therefore, one should either reduce food intake or increase physical activity.At present, some one million Israelis exercise on a regular basis, which means they are members of a gym. This may seem like a lot, but it isn’t. It amounts to 13% of the total population, compared to 20% in the US and the UK. Awareness of the need to keep fit for both health and aesthetic reasons is increasing, but it has a long way to go before it reaches Western levels.In Israel, exercising at a gym is very seasonal. Demand goes up substantially just before summer when women want to look slim and attractive at the beach, and men want to look manly and muscular. At the end of the summer attendance decreases, only to reappear after the High Holidays when the calories have added up.Because of the importance of keeping physically fit, especially in these sedentary times, people should be exercising on a regular basis. The various gym and health club chains are busily promoting themselves. For them, the more members and clients, the rosier the balance sheet of increased income and profits. Sela agrees that it is in the interest of the industry to increase demand, but it is also in the interest of any government that has the well-being of its citizens at heart. And it is in the interest of governments that want to cut costs, especially in their health budget.It is a well-known fact that exercising on a regular basis reduces the tendency to get sick, especially cholesterol-related illnesses such as heart disease and circulatory problems. Exercising two to three hours a week will substantially reduce the risk of developing heart disease.For women onlyStudio C is a special kind of fitness center. It caters to women only. A 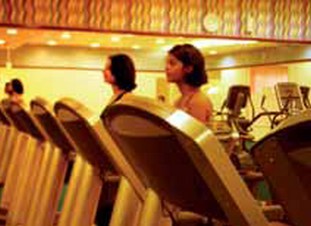 fitness center that caters exclusively to women is different than one that caters primarily to men.As Shiri Even-Zahav, Studio C’s marcom manager, explains, “Fitness centers for men put an emphasis on developing strength and enlarging muscles through weight lifting, push-ups, etc. With women, it is different. The emphasis is on flexibility of the muscles, stretching the muscles for straight backs, etc. We adapt the physical exercises to the needs and physiology of the client. We have members from age nine to 80, and their needs are different,” she says.In a fitness center that caters to women, expertise on how to treat women during pregnancy and after is very important. Proper physical exercise can minimize the impact of pregnancy on the shape of the body, while proper postnatal exercise can help retain the elasticity of the body, etc.For this purpose, Studio C has a team of professional instructors and the most modern equipment. The management of Studio C believes in the importance of proper nutrition and eating habits; therefore, they have clinical dieticians to give advice on the right diet on an individual basis. Within the framework of the exercise program, there are also courses on personal self-defense. The training regime in women’s fitness centers is meant to preserve the shape of the female body as much as possible. But as Even-Zahav explains, “The right physical exercise enhances the feeling of well-being, and that is also reflected in the face.The social aspect of keeping fitFitness centers are focused primarily on physical training, on developing 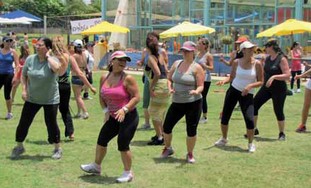 muscles, creating physical activity and burning calories. Country clubs, on the other hand, encourage physical activity but are more socially oriented. Members go there to train, but they also go to meet friends, have a meal together, etc.In Israel, a country club is not necessarily in “the country.” Any establishment with a swimming pool, a gym and one or two tennis courts goes by the name of a country club, even if it is located in downtown Tel Aviv.Kobi Maimon, general manager of the Sportan chain of country clubs, says, “The municipalities are very keen on promoting country clubs in their cities. They are willing to supply the land, mostly in the suburbs. Such an establishment serves two purposes: It provides sporting and social services, and it is a green oasis in the urban landscape.”Maimon adds, “The concept of the country club is very different from that of a fitness center. We emphasize the team spirit of sport; we cater to the needs of the family; and we create a pleasant social atmosphere. As a result, the dropout rate of country clubs is 25% to 30% on average - much less than the dropout rate of fitness centers.