Previously, French medical degrees were not recognized in Israel, making immigration for doctors a difficult task. 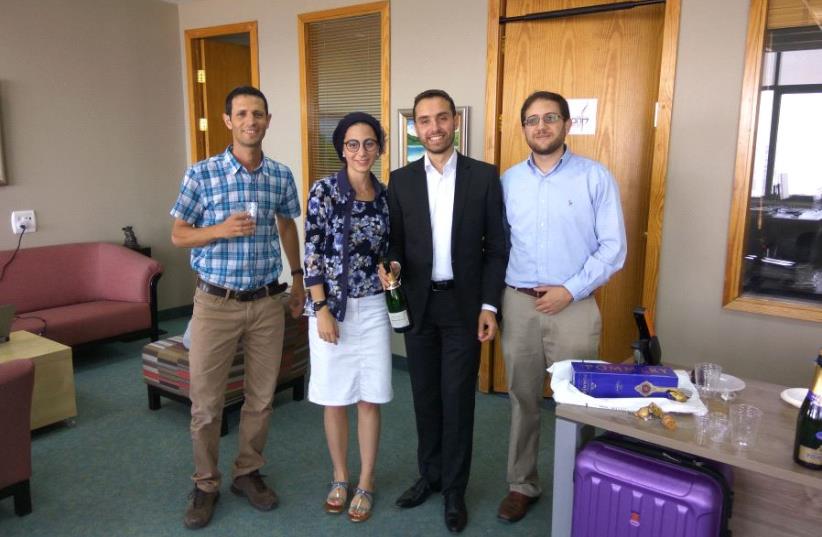 Adv. Ariel Erlich (litigation dept. Of kohelet), Esther and Raphael Derman (the French medical graduate who pushed for this MOH decision) , Adv. Meir Buchnic (kohelet)
(photo credit: KOHELET POLICY FORUM)
Advertisement
French organizations in Israel are applauding a Health Ministry decision to recognize French medical degrees, breaking down a significant barrier for immigrants.The ministry previously did not recognize French medical degrees because the structure of higher education in France is different from the Anglo-American model followed in Israel. But, in a letter sent to attorney Meir Buchnik, deputy director of the Kohelet Policy Forum, on Sunday, the ministry said it will recognize students who have completed six years of medical school in France and hold the Diplôme de Fin de Deuxième Cycle Études Médicales (diploma signifying completion of the second cycle of medical studies).At a Tuesday meeting at the Knesset’s Labor, Health and Welfare Committee, chairman Eli Alalouf (Kulanu) and Health Ministry associate director-general Prof. Itamar Grotto announced that this decision would implemented next week.“These doctors studied medicine in the world’s finest schools, however, the Health Ministry refused to recognize them as doctors for the sole reason that the title given to French doctors is not MD [a remnant of France’s attempt to keep the doctors in France],” the Kohelet Policy Forum explained. “These doctors could work in any EU country, the US and in Canada, but they are not welcome in Israel unless they stay in France and finish their residency.”Following Sunday’s decision, those students will now be able to finish their residences in Israel after taking an exam here. The letter also states that a graduate who has completed at least one year of residency in France will be entitled to practice medicine during their residency in Israel.The Forum described the development as a “giant leap for the aliya of doctors from France,” because the previous red tape may have prevented them from immigrating.“Young people usually come at that stage in their lives,” said Shuky Blass, head of Kohelet’s media department.Kohelet, along with Qualita, the umbrella organization for French olim, and the NGO Gvahim have been campaigning to resolve this issue, aided by Alalouf, who has been helping to push through a bill on the matter. In light of this latest development, the bill has been postponed and will probably no longer be necessary.Despite the progress, Qualita’s CEO, Ariel Kendall, said the organization was “very sad” to see that the situation continues for nurses from France who are unable to work in their profession in Israel because their accreditation is not recognized.“Is it logical that qualified, experienced nurses who trained in a country with a world-class medical level are not good enough for the Israeli health system, which is suffering from a massive shortage of manpower? “We call upon the Health Ministry to act as soon as possible in order to resolve this issue, as well,” he said.