If water could talk: Jerusalem gets first advanced hydrotherapy pool

A patient receives treatment in ALEH's new hydrotherapy pool in Jerusalem
(photo credit: COURTESY OF ALEH)
Advertisement
Shimon Agay’s 6-year-old daughter, Inbal, suffers from severe physical and cognitive disabilities. On a regular day she sits in a wheelchair barely able to move. However, once a week, “She is calmer, happier, just more relaxed,” he said.This change is a result of Inbal’s new hydrotherapy treatments, which she is receiving in ALEH Jerusalem’s new hydrotherapy pool. The pool, which provides the more than 150 ALEH Jerusalem patients who suffer from severe complex disabilities with easy-access to water-based therapies, opened in March. “In the water, Inbal kicks her hands and feet,” said Agay. “All her other therapies are such hard work for her, they are exhausting. In the water, she is calm.”Hydrotherapy, the therapeutic use of water, has been recorded since ancient times. There are several opportunities to do private hydrotherapy treatments in Jerusalem. But the new ALEH hydrotherapy is unique in that it is the first of its kind in Israel to use an augmented alternative communication (AAC) system that allows nonverbal patients to express their feelings, wishes and emotions to caregivers, support staff, attending therapists and lifeguards via special communication boards placed strategically around the pool. 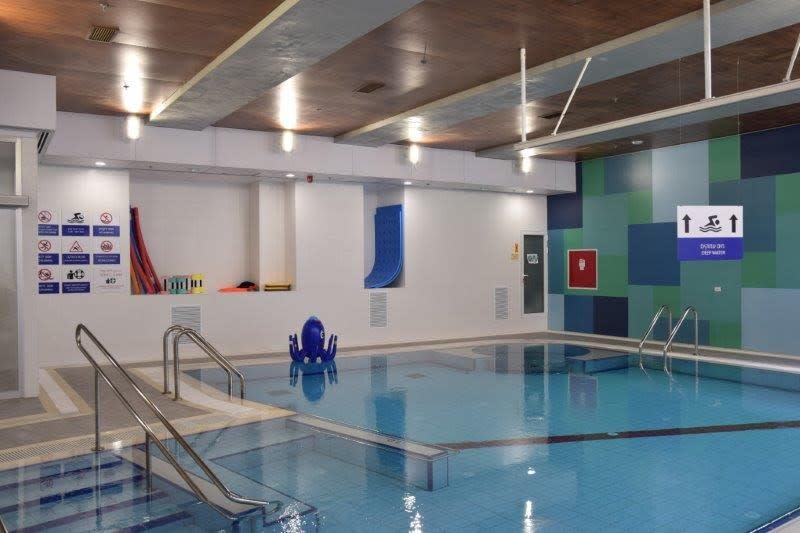 ALEH's new hydrotherapy pool in Jerusalem (courtesy of ALEH)Shlomit Grayevsky, director of ALEH Jerusalem, said that through the AAC system, “children can communicate their fears and feelings, as well as their preferences for the temperature of the water.”Until now, ALEH has been using the AAC system in classrooms and treatment areas, enabling the nonverbal to express themselves by pointing to cards that match their moods or requests. ALEH personnel sometimes wear lanyards that include a full deck of AAC cards to help them, communicate with residents during workshops, meals or other activities.  Grayevsky said that ALEH has been trying to add hydrotherapy to its mix of therapies for at least 15 years. The organization started actively raising money for the pool a few years ago. It then took several months to build the pool on the ground floor of ALEH and equip it with all the access equipment needed to allow patients to get in and out of the pool safely. The pool is large enough to accommodate about 16 people – eight patients and eight caregivers – at one time. ALEH’s hydrotherapy program is covered by National Insurance and Jerusalem residents who are not enrolled full-time with ALEH can book therapy sessions, as well.ALEH teacher Zahava Altshul said she has one student who can barely stand on her own and certainly cannot walk. In the pool, Altshul said, this student has taken steps. Another child would cry each time she would get near the water. Altshul said in just the last month the hydro therapist has managed to engage the child in the pool.“Now, she loves it,” said Altshul. “She smiles the whole time, flaps her hands and makes happy noises.”Altshul said that getting the kids ready for hydrotherapy is a lot of physical work for the staff, who must change the children, shower them before and after, and more. But when you see them in the water,” she said, “it is worth every minute.”