Developed by Tel Aviv-based StemRad, the suit is designed to shield astronauts during a trip to Mars. 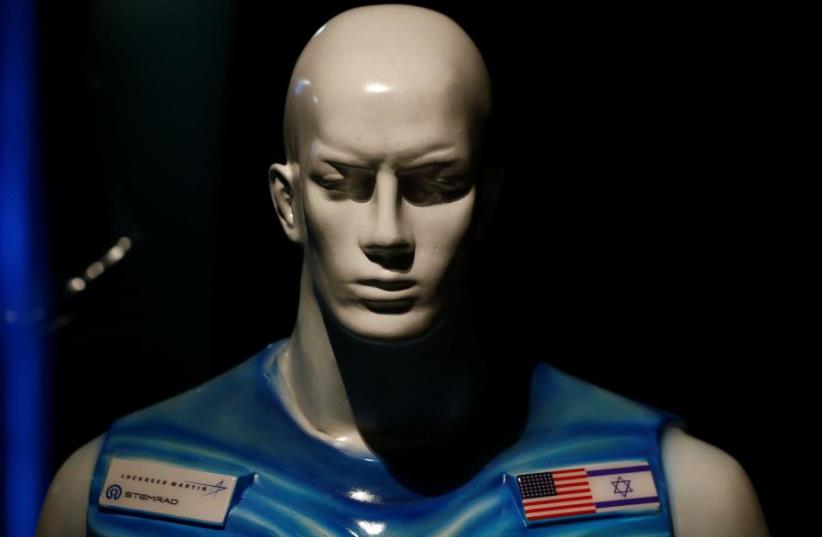 A sculpture of a man wearing Stemrad's new protective vest, Astrorad, is seen at an exhibit at Madatech, National Museum of Science Technology and Space in Haifa, Israel February 23, 2017. Picture taken February 23, 2017
(photo credit: REUTERS)
Advertisement
A special suit developed by the Israeli company StemRad to protect astronauts from space radiation will be launched into space as part of preparations for NASA trips to Mars and carries the flag of Israel.The Israel Space Agency (IAA) of the Science and Technology Ministry will sign an agreement with the National Aeronautics and Space Administration on Tuesday to send the suit on the Deep Space Experiment flight as part of a feasibility study for the Mars mission in 2021. The agreement will be signed by IAA director-general Avi Blassberger and NASA director Robert Lightfoot during a space symposium in Colorado.According to Science and Technology Minister Ofir Akunis, “Israeli entrepreneurs are known all over the world for their innovation and thinking outside the box. We are proud to pave the way for entrepreneurs and enable them to integrate the first Israeli technology of its kind in one of the most fascinating experiments in recent years. This is a wonderful gift for Israel’s 70th anniversary celebrations.”
Israeli Nano-drops bring simple eye fix into view (Reuters)
A Related Video You May Like:
The AstroRad suit was developed by StemRad, which was founded by Dr. Oren Milstein. The company is based in Tel Aviv and has a US office in Tampa, Florida.The suit was created based on the principle of selective protection of the bone marrow and the lungs, chest, stomach, colon and ovaries – organs that are particularly sensitive to the development of cancer due to exposure to radiation. The suit, which was first adapted to women because of their sensitivity to radiation, is made from hydrogen materials and is worn on the upper body, similar to a vest.The suit was developed following the success of the company’s first product – a special belt that protects the bone marrow in the pelvis – which is commonly worn by “first responders” to radiation accidents around the world. StemRad is collaborating with Lockheed Martin to adapt the suit’s technology to space use.The agreement with NASA follows an agreement signed a year ago between the ISA and the German Space Agency to test the suitability of the suit to the effects of radiation in deep space and the extent of its absorption by the human body.A Russian doll with thousands of radiation sensors inside will be dressed in an AstroRad suit developed by the Israeli company and compared with effects on a similar doll that won’t be protected by the suit. They will be launched as part of the Orion spacecraft built by NASA to circle the moon.About a month later, when the probe returns to Earth, the team will be able to examine the level of radiation absorbed in it and its efficiency compared to the second doll, and make adjustments in the suit as required.In addition, the suit, which will also carry the Israeli flag, is expected to be launched in the second half of 2019 as part of NASA’s supply mission for the space station. There, astronauts will wear it even while they sleep to assess its comfort and suitability for various activities.StemRad hopes that the suit’s mission thus will not end there. The flight around the moon is considered critical preparation for Orion’s next manned flights. The suit would then be included in NASA’s 2021 Exploration Mission 2 and in subsequent missions to Mars.
Sign up for the Health & Wellness newsletter >>