Paramedical workers in hospitals and clinics will strike Sunday 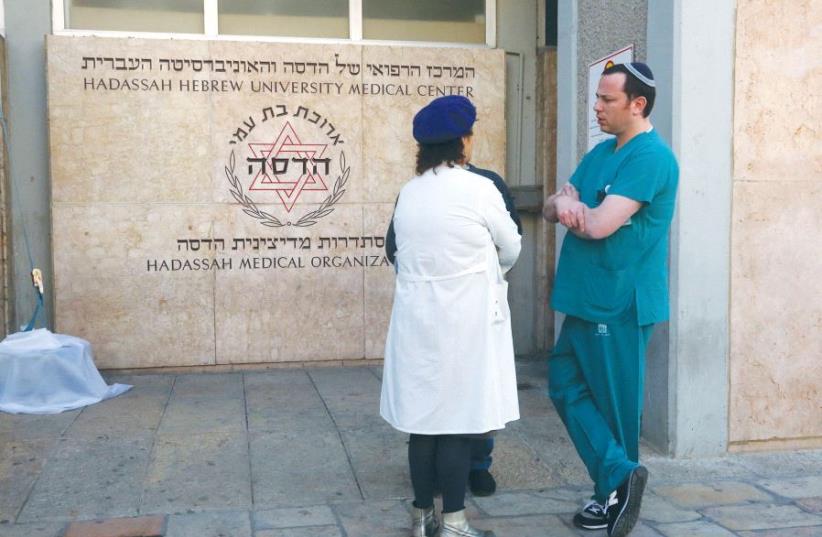 MEDICAL STAFFERS at Jerusalem’s Hadassah-University Hospital in Ein Kerem discuss yesterday’s call to strike.
(photo credit: MARC ISRAEL SELLEM/THE JERUSALEM POST)
Advertisement
Some 5,000 physiotherapists, dietitians, speech therapists, occupational therapists, dental hygienists, genetic counselors, art-and-crafts therapists and other paramedical workers in the public health system will strike in hospitals and community health clinics around the country on Sunday, the Histadrut labor federation announced on Thursday.The reason given for the strike, which begins at 7 a.m., is the “shortage of manpower slots and a decline in standards for the employment of workers in the paramedical sector [by hiring contact workers], which led to the expansion of workload, abusive forms of employment and severe injury to workers and quality of service to the public. Health professionals are in an impossible situation today,” said Eli Gabai of the health workers union in the General Labor Federation. “Until now, we have done everything to avoid organizational steps, but we cannot continue this way. The system has crashed.”The general strike will include paramedical workers employed by the Health Ministry, Clalit Health Services, Meuhedet Health Services, the Hadassah Medical Organization, Shaare Zedek Medical Center, mental health centers and other institutions.The decision to begin organizational steps came after a long period in which the union repeatedly warned government representatives of the collapse of the system and the serious implications of the under-allocation of standards in the field, said Gabai. “After all the union’s repeated appeals to the state were nullified, the Histadrut declared a labor dispute over the matter in January.”
Sign up for the Health & Wellness newsletter >>