Moon lovers will be rewarded this Wednesday night. 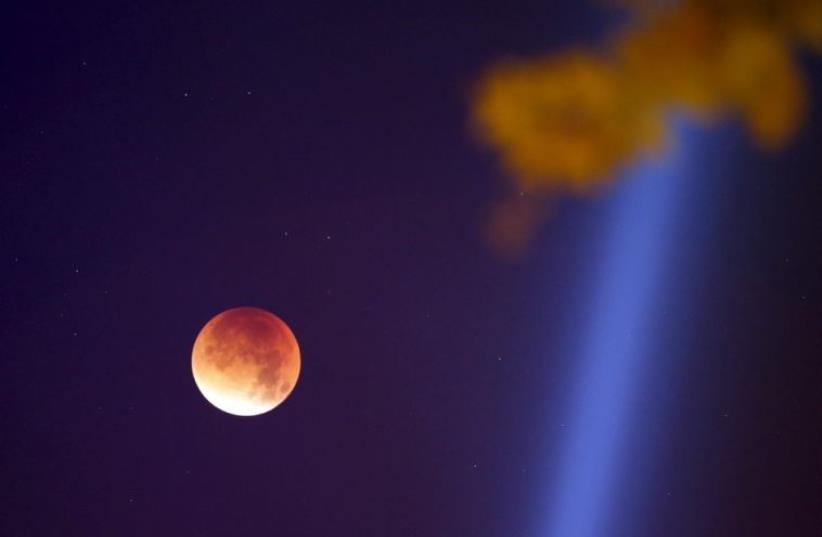 The Moon, appearing in a dim red color, is covered by the Earth's shadow during a total lunar eclipse over Paris
(photo credit: REUTERS)
Advertisement
Weather permitting, Israelis will have the opportunity early this evening to partially view a rare “blue moon total eclipse,” along with others in the Middle Eastern parts of Asia, North America, Alaska and the Hawaiian islands.Today’s lunar phenomenon is special for three reasons.Firstly, it is a total lunar eclipse, where the Earth passes exactly between the Sun and the full Moon, casting a total shadow onto its lunar neighbor.Secondly, it is the second full moon of the calendar month, commonly known as a “blue moon.” The first one was on January 1 and 2, depending on the viewer’s time zone.Thirdly, it’s the third in a series of supermoons – when the moon is closest to Earth in its orbit and therefore appears larger and is about 14% brighter than usual.Supermoons can be either full moons, where the entire disk of the moon is visible – or new moons, where only a sliver of the newly emerging disk is visible.According to the space.com website, blue moons are not as rare as the old saying “once in a blue moon” implies; they happen about once every 2.7 years.But today’s combination cosmic event, consisting of a total lunar eclipse occurring on a blue moon, is relatively rare; the last time it happened was 152 years ago. Occurrences are irregular, however – the next time is only about 11 years away at the end of 2028, followed by another occurrence about eight years later at the beginning of 2037.The super blue moon will pass through the Earth’s shadow to give viewers in the right location a total lunar eclipse. Here in Israel, it will only be a Penumbral Lunar Eclipse, where a significant crescent will still be visible before the shadow begins diminishing in size and the full moon reappears.According to NASA, while the Moon is in the Earth’s shadow, it will take on a reddish- orange tint, known as a blood moon. The colored light is sunlight that has skimmed and bent through Earth’s atmosphere and passed on through space to the Moon.Unlike a solar eclipse, a lunar eclipse can be viewed with the naked eye safely, without protective eyewear.Today’s blue supermoon eclipse will begin locally at 5:18 p.m. and end at 6:08 p.m.
Sign up for the Health & Wellness newsletter >>