The risk of kidney stones and stroke increases significantly among those who fast during Ramadan. 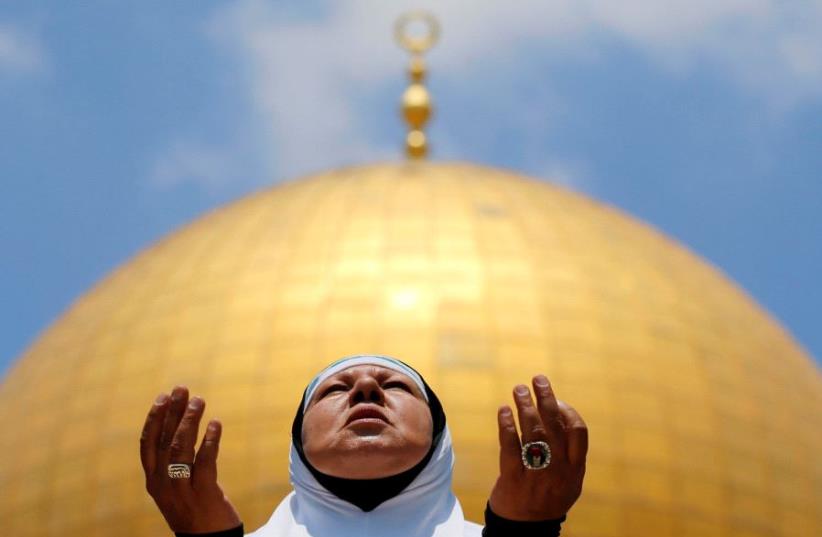 A Palestinian woman prays on the first Friday of the holy fasting month of Ramadan, at the Temple Mount in Jerusalem's Old City June 2, 2017.
(photo credit: REUTERS/AMMAR AWAD)
Advertisement
The Muslim month of Ramadan that began in fierce heat last week is not good for health, according to researchers who found an increased occurrence of kidney stones and strokes among those who fast every day from dawn to sunset, as their religion requires.“There is a high frequency of patients arriving at the emergency room with kidney stones, especially among the first two weeks that Muslims fast for Ramadan,” said Dr. Yiftah Sagi, an internal medicine specialist at Soroka University Medical Center in Beersheba. The prevalence is 27% higher than when it is not Ramadan. “Increased drinking of water during the evening hours when it is permitted, or permission from doctors and clergymen to drink even during the fast because of health problems may, however, reduce the appearance of stones,” added Sagi.Stones in urinary tracts can cause pain and suffering and may even lead to chronic renal injury. They are also a common cause of referral to hospital emergency rooms. Among the causes are the “hard water,” which is common to Israel, hot temperatures and inadequate consumption of water.In the course of the study, the researchers performed a daily analysis of all patients who were referred to Soroka’s emergency department between 2012 and 2015. The data were adjusted for the daily weather and temperature.The study found that 25% of the 18,163 patients who arrived at the emergency room with urinary stones were Muslims, whereas they make up 20% of the southern population. All study groups showed a significant association between increased daily temperatures and an increased risk of developing kidney stones. During the first two weeks of the month of Ramadan, there was a 27% increase in the number of daily visits of patients with stones among the Muslim population, whereas among the Jewish population there was no change during the period.“The month of Ramadan is the most important month for millions of Muslims worldwide,” said Sagi. “We believe that increasing awareness of the risk of kidney stones during this month, and especially during the first two weeks of fasting, is particularly important in vulnerable groups such as the elderly and the sick.The new study, recently published in the medical journal QJM, was conducted under the guidance of Prof. Victor Novak, in cooperation with Dr. Waldemir Zeldz of Soroka Medical Center, Dr. Muhammad Abu Tilach and Daniel Halperin.ALSO DURING Ramadan, the danger of stroke among Beduin who fast is some 1.5 times greater than during the rest of the year, according to Soroka Neurology Department director Prof. Gal Ifergan. “Toward Ramadan, it is recommended to consult with the family doctor, update medication and learn how to take it during fasting, drink during the permitted hours and maintain a balanced sugar/insulin state in diabetics.”This study was recently published in the Journal of the American Heart Association.Ischemic stroke is one of the most common causes of hospitalization and death in the Western world and is associated with various risk factors such as hypertension, diabetes, atrial fibrillation, smoking, climate and air pollution.About 23% of the world’s population is Muslim, including some 20% of Negev residents – Beduin who observe the fast. Ramadan falls every year on a different date, with the month arriving 10 to 11 days earlier than the previous year. This year the Ramadan fast will end on June 14.The study included approximately 5,750 stroke cases, of which 4,727 were defined as ischemic stroke. Approximately 564 of the patients were identified as Beduin, based on addresses of one of the 18 permanent Beduin communities in the Negev. During the entire study period, 51 cases of ischemic stroke were identified among Beduin during Ramadan. However, due to the fact that the dates of Ramadan during the study years were in the summer months (June-August), the results of the study were adjusted to average weekly and summer temperatures.The data analysis showed that among Beduin, Ramadan increased the risk of stroke almost 1.5 times compared with the rest of the year, with a 73% increase in stroke risk during the first two weeks of the month.“Due to the diverse population living in the Negev, which includes both Jews and Muslim Beduin, we were able to conduct a study that included a group of Muslims and others. In addition, we compared the period of Ramadan to all other months of the year, as opposed to past studies, in which it was customary to examine only the months near the month of Ramadan,” Ifergan noted.“We believe that the increased risk during Ramadan is related to changes in lifestyle [diet, sleep and smoking] during this period, a tendency to dehydration, lack of medication. Also, an imbalance of diabetes [which is more likely with fasting] can be a trigger for cardiovascular events. Further research is needed to understand the physiological mechanism and draw conclusions about the prevention of strokes during the month of Ramadan,” he concluded.
Sign up for the Health & Wellness newsletter >>