Why is Israel’s opioid death rate so much lower than in the U.S.?

A needle used for shooting heroin and other opioids and an empty bag litter the ground in the Kensington section of Philadelphia, Pennsylvania, U.S. October 26, 2017.
(photo credit: REUTERS/CHARLES MOSTOLLER)
Advertisement
While deaths from abuse of opioids in the US are rampant – at 33,000 in 2015 – the death rate in Israel is 1/30 of that and declining, according to a study at Ariel University.The study found that the already low mortality rate in Israel has been declining in recent years – a clear reversal of the notion that everything that happens in the US eventually gets to Israel.While the rest of the Western world lives longer, Americans are dying younger and younger; their health system is the most expensive and least efficient in the world. The reason for this trend has puzzled public health experts because it is not due to a decline in the life expectancy of the elderly; rather it is from the death of people in their 20s to 50s.One of the main causes of deaths in the US is what has long been dubbed the “opioid epidemic.” Since the late 1990s, more than 200,000 Americans have died as a result of using opioids.Opioids are drugs that act on opioid receptors in the brain to produce morphine-like effect. They are used mostly for pain relief, including anesthesia. Americans of all ages take them in large doses, and many have died from overuse.The study examined the incidence of deaths from opioid use in Israel between 2005 and 2014. Dr. Daniel Feingold of the university and Lev Hasharon Medical Center; Nechama Goldberg and Tziona Haklai of the Health Ministry; and Dr. Shauli Lev-Ran of the Lev Hasharon Medical Center and Tel Aviv University’s Sackler Faculty of Medicine examined all the death records here as a result of such drug use. 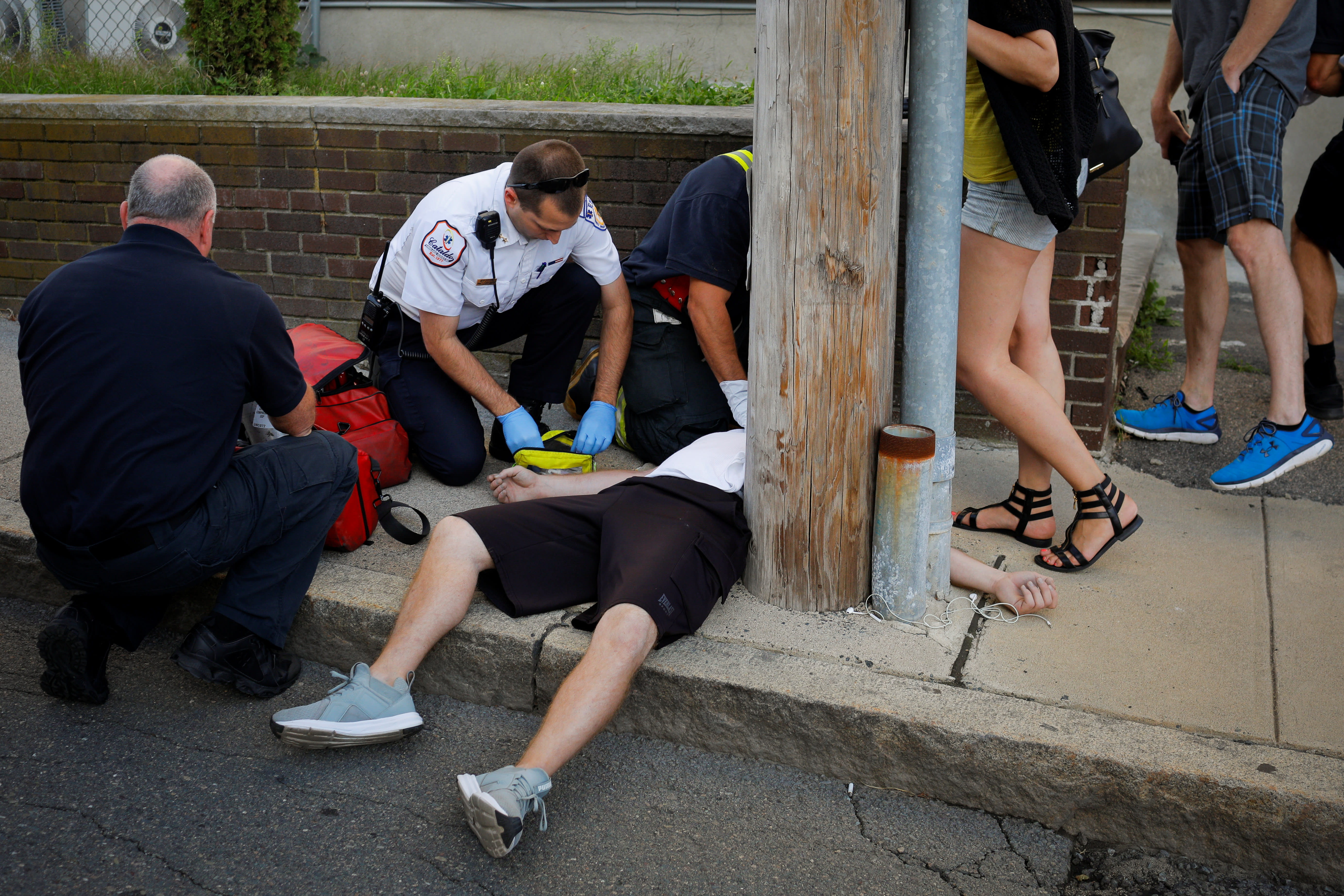 Cataldo Ambulance medics and other first responders revive a 32-year-old man who was found unresponsive and not breathing after an opioid overdose on a sidewalk in the Boston suburb of Everett, Massachusetts, U.S., August 23, 2017. (REUTERS/BRIAN SNYDER)
According to the researchers, the rate of death due to opioids in Israel is significantly lower than in the US and Europe. In 2014, opioids caused nine deaths per 100,000 American residents – 30 times the Israeli rate of 0.3 per 100,000. This is a decline from the 2004 Israeli rate of 1.3 per 100,000.A possible explanation, the researchers suggested, is the nature of our public health system, as opposed to the private sector in the US. In addition, as a small country, Israel has only four public health funds, with an efficient and effective central computer system. Americans living in 50 states generally oppose centralization of medical systems.In addition, studies have shown that regulation of the use of cannabis is associated with a decrease of opioid prescriptions. Since the use of medical cannabis under strict supervision in Israel has increased since 2008 to include many tens of thousands of patients, it apparently contributed to a reduction in the mortality rate from opioids.It is also much more difficult for patients in Israel to switch from one general practitioner or family physician to another in order to get a new prescription for opioids, because patients are usually associated with one regular doctor. In addition, the details of patients’ previous prescriptions appear on the cash registers at health fund and private pharmacies. The Israeli system is also characterized by strong regulation, including restrictions on the prescribing of opioids.In the US, however, there is a proliferation of private insurers, different laws for different states, and in general, regulation is much weaker than that in Israel.Yet another explanation for the gap is that while in Israel pharmaceutical companies are not allowed to advertise prescription drugs directly to the consumer, in the US direct marketing and advertising of prescription drugs, including opioids, are freely permitted.
Sign up for the Health & Wellness newsletter >>