A visit to Ruth’s tomb – perfect for Shavuot

Because the Book of Ruth is read on Shavuot, the site in Tel Rumeida is a popular destination for the holiday. 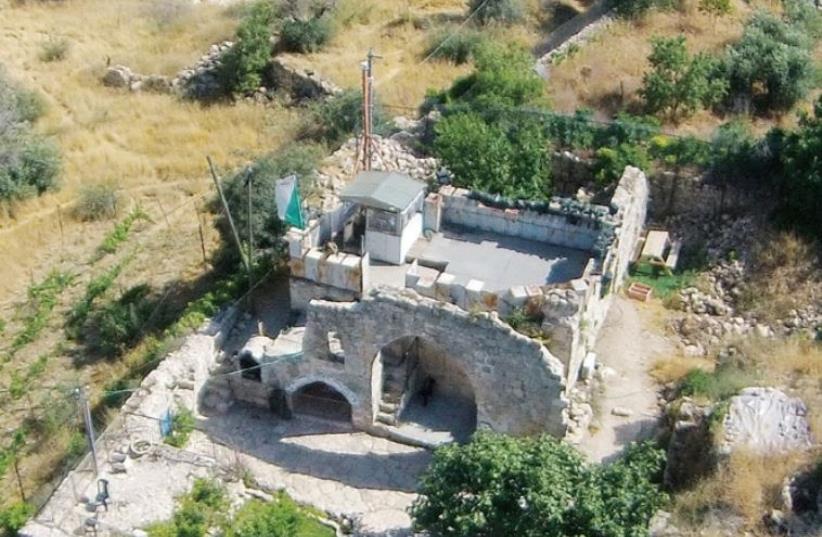 King David’s roots: An overhead view of the ancient site
(photo credit: DAVID WILDER)
Advertisement
Now that Hebron has been open for 49 years, serious archeological excavations by both Israeli and international researchers have been taking place. One of the more striking discoveries has been in the vicinity of the Tomb of Jesse and Ruth, an ancient stone structure that has been revered for generations as the burial site of Ruth and her grandson Jesse – great-grandmother and father, respectively, of King David.Because the Book of Ruth is read on Shavuot, the site in Tel Rumeida is a popular destination for the holiday.Last year, a team from the Israel Antiquities Authority and Ariel University discovered large mikvaot (ritual baths) dating back 2,000 years near wine presses.Previous excavations conducted in the 1990s discovered an ancient royal seal on a clay jar with the Hebrew inscription “To the King, Hebron.”The building known as the Tomb of Jesse and Ruth, however, has never been excavated. Today used for prayer services, ever since the Middle Ages Jewish travelers have described this location as a site of visitation and worship. Legends speak of a tunnel that links the Tomb of Jesse with the Tomb of the Patriarchs.An ancient structure to the west of the archeological mound, facing Jerusalem, has been identified as a synagogue.Residents have refurbished the ancient stone structure so it can be used as a synagogue today. As of this year, tables and chairs have been arranged in the cave-like structure, and Jewish prayer services are held. Lighting has been attached and hooked up to electricity outside the site as well.One of the earliest known references to the tomb comes from an unnamed student of the Nahmanides, who visited the site in 1289 and 1290. He wrote of visiting the “cave of Jesse’s grave” on a hilltop near the Cave of the Patriarchs and the “ancient Jewish cemetery of Hebron.”His words were reprinted in a collection of travel diaries of medieval Jewish travelers titled Ma’asot Eretz Yisrael, edited by bibliographer Abraham Yaari.The Jewish traveler Ya’acov Hashaliah mentions visiting the grave of Jesse, father of David, in Hebron in 1235, but he does not specify the burial place. These comments were reprinted by historian Julius Eisenstein in his 1927 book Otzar Masa’oth, an anthology of itineraries by Jewish travelers.Lady Judith Montefiore, wife of famed philanthropist Sir Moses Montefiore, mentions the site in the posthumously published Notes from a Private Journal of a Visit to Egypt and Palestine, By Way of Italy and the Mediterranean in 1885. She states, “While the fete was being prepared, we rode up the hill to visit some ancient tombs, one of which was that of Jesse, the father of David, and at which we said our evening prayers, joined by eight Israelites who had accompanied us. Returning down the hill, the sight that presented itself to us might well have employed a painter’s skill...“How greatly should I enjoy having a house in this extensive plain, where our tents are now pitched, and where I could linger as long as I chose, contemplating the sublime mountain scenery, wandering amid the monuments of the founders and teachers of our nation...”