A most unusual summer space for creation takes shape in the middle of the city. 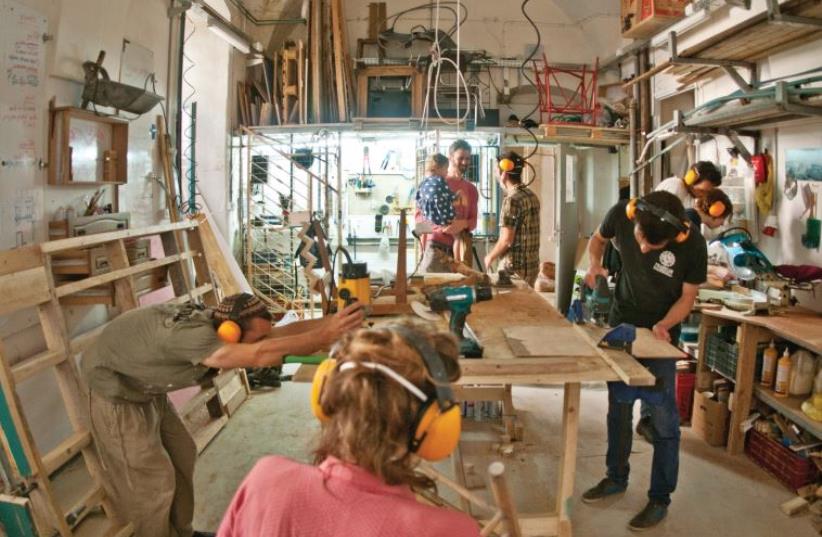 The Empty House art collective is working with the municipality to create a new kind of ‘urban capsule’ – in the form of HaMiffal
(photo credit: SHAI HALEVI)
Advertisement
It is a fantasy of many artists to be given a space where they could just go wild, do their thing, whatever comes to mind, create a world where other people could perhaps experience something entirely different that is outside the common, dayto- day path.This kind of fantasy seems to also stand behind one of this summer’s most intriguing art projects in Jerusalem’s city center. HaMiffal is a temporary art and community complex that is planned to run until August 30 at 3 Hama’aravim Street off Gershon Agron Street, featuring art exhibitions, performance shows, poetry, music, artists’ workshops and food and drink – all in one place.This is the sixth project of the art collective that goes by the name Empty House. Indeed the group, which has been in existence since 2011, operates by taking over deserted sites in Jerusalem, usually without permission, in order to create what group co-founder Elad Yaron calls “cultural halls,” which last no more than a few days.Each time, a new kind of “urban capsule” is created. Each has its own character, based on the physical attributes of the site chosen by the group. The common denominator in the various projects is art, performance and having a good time in a space that had been hidden, unused and forgotten.This time, however, it was the Jerusalem Municipality that commissioned the project, allowing the collective to take over a beautiful old building in the historic Ma’aravim neighborhood. Despite the municipality’s involvement, the traditional anarchistic, even chaotic, feel is still very prominent in this project as well. And yet, of all Empty House’s previous activities, this is the most “established” one, if only due to the fact that it received a generous budget of NIS 600,000. The sum enables all the contributors to be paid and the visitors to enter the complex for free.HaMiffal roughly translates as “the factory,” although Yaron says the group prefers to refer to it as “The Endeavor.”“Think of the Zionist endeavor or the settlement endeavor,” he says, adding that what they tried to emulate was a sense of industrialism, “something that looks to the big industries for inspiration.”June 30 was the day of the opening. The group had been working very intensively on the place for three months, starting with some 15 people and ending up with around 100 who were actively involved in preparing the place for the summer.But even on the morning of the grand opening, its first official operating day, nothing seemed to be quite permanent. One really feels as if one were stepping into a laboratory. People were still vigorously installing, painting walls, trying things out, hanging items and hammering all over the place until the very last moment, getting ready for the expected evening crowd.One of the most interesting revelations of the project involved the property’s original owners.“It happened in a random conversation,” says Yael Hershcovitz, a member of the group, “when a friend of mine told me that the house used to belong to his grandmother.”It turns out that the house was built by a well-to-do Christian-Arab family at the end of the 19th century, something that was not known before. Following the 1948 war, some family members moved to Lebanon, from where a few – including the grandmother – eventually returned to Jerusalem.Hershcovitz says it was very exciting having the 96-yearold woman visit her old home. She said she felt better about the fact that the property was not taken over by real-estate moguls as many of the other adjacent properties have been.In a corner of the main building hall, a woman is standing with a broomstick, her clothes spattered with paint. Asked if she has a minute to talk, she replies that she is “just a worker” (meaning no). That is how some contributors and members of the group refer to themselves – “factory workers” (workers of HaMiffal).At a different place, just by the gate, there’s shouting going on. Two young factory workers from the woodworks section of the complex are arguing with a man who is standing just outside the fence of the complex, leaning toward them.“This [the complex] is all a load of nonsense!” he shouts, waving his hands. “What is the point of having this whole project just for carpentry, just for food? Where’s Beethoven’s Symphony No. 9?” he continues, obviously pleased with himself, “Now, that’s sublime culture!” The amused and patient pair inform him that they will also have live music every week in the garden, as he can see in the program, and that he is invited to see the place for himself.“Have you seen it yet?” they ask.“No! Why should I?” he continues shouting insistently.Tough crowd.Despite this encounter, Yaron says that the group has tried its best to get the neighbors involved, with some success. They invited them for a meeting at the beginning of the project, where they explained what they were planning and invited them to join the efforts. In the garden, for example, Yaron explains, there is a mud house that was started by some of the younger residents of the neighborhood long before this project began and was perfected later as part of the group’s activity into a small shaded getaway, equipped with fans and available for anyone to use.Obviously, it is hard keeping everyone happy, especially in this city.“It’s a kind of experiment” explains Yaron. “We use the word ‘art’ [to describe the place] because that’s where most of us come from, art – that’s what we do; but I’m sure every visitor here would see that there is much more to it than that.” HaMiffal is open Monday, Wednesday and Saturday from 11 a.m. to 11 p.m.; and Friday from 11 a.m. to 7 p.m. To learn more: hamiffal.com.