“uChange is the first international brand for peer-to-peer, cash exchanges.” 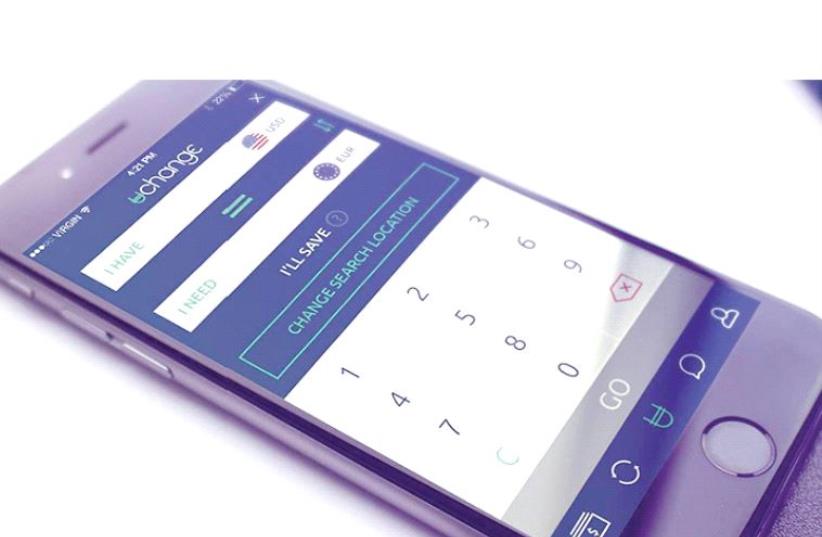 uChange
(photo credit: SAM SCHUBERT)
Advertisement
‘It’s basically the beginning of the public handling money transactions outside of the banking system,” Sam Schubert responds, when asked to describe the uChange application. Schubert, a 28-year-old from Dayton, Ohio, who came to Israel three years ago, is passionate about the app. “Whereas in the past the banks have been charging the highest fees to the people with the least amount of money and nearly no fees to the wealthy, we believe that exchanging money should be free for everybody.”If someone transfers $1,000 from the US to an Israeli bank, the bank will take a minimum of 5% to process that transaction. That translates to $50. If someone does a foreign transfer of $100,000 or more, the bank’s fee is next to nothing, since it is in the bank’s best interest to process such a large sum of money.

“The banks hide the fee by making up their own exchange rates, and call it the real market rate when it most clearly is not,” Schubert says. “For instance, say the rate is $1 equals NIS 4. The banks will say that there are no fees charged for a transfer, but their exchange rate will be $1 equals NIS 3.75. They’re basically hiding the fact that they’re screwing us.”In any major city, customers are losing a minimum of 5% when exchanging money in a kiosk or when transferring money from one bank to another internationally. For people transferring less than $100,000, the banks are charging fees that they really can’t afford. “It’s a system where they’re charging people and hiding fees and that system is slowly dissolving,” Schubert says. “uChange is the first international brand for peer-to-peer, cash exchanges.”Schubert joined the uChange team three months ago. Avi Kugel, the CEO, built the application and raised all of the seed money a year prior to their meeting. uChange was born from real-life experience; necessity as the mother of invention. Kugel was in line at a kiosk in the airport, waiting to exchange foreign currency, when he thought, why not exchange with the person standing right next to him? Schubert had been running a Facebook advertising agency, which paid him in dollars. “I started researching online because I felt like I was getting screwed by the banks,” he explains.“I was exchanging my money for free by paying for a friend’s concert ticket with my credit card and then they would give me shekels. I ended up running around for a few months pitching this idea for an app that would enable these free money exchanges, not knowing that there was already an app doing this. Eventually a mutual friend connected me and Avi.”The way Schubert and Kugel met was something out of a storybook.Schubert went to pitch his idea for a free currency exchange platform to a potential investor and ended up meeting with the wrong person. Six months later, that same person was trying to rent a space, and saw that uChange had the office next to it. He called Schubert and informed him that there was in fact an application doing exactly what he was proposing to do. “Avi really did all the work and then we met and discussed different strategies to approach advertising, since that’s my background,” Schubert says.“I also am passionate about not letting the banks screw me and putting the power back in our hands. When Avi and I met, it was a really nice fit. We needed each other. The digital marketing aspect, in terms of advertising and press, and all that is required to officially launch the app; that’s what I know.”After recently going live, uChange already has over a thousand users who signed up organically and hundreds of real-time exchanges taking place. They plan a soft launch in Tel Aviv and Jerusalem in the coming months. With the current buzz generated entirely organically, uChange is on track to raise about $1.5 million, which will enable them to launch in major cities soon.“We’re the only platform that is completely free, from downloading the app to exchanging the cash,” Schubert explains. “It’s the first step to transforming the current system into a person-to-person system. Right now, the market for travelers each year in cash is $300 billion, with almost two billion travelers per year.“Our platform is similar to Tinder if you think about it. We match two people with similar interests in the same location, so that they can meet up.”In terms of the possible security worry, uChange has a multi-step verification process, where users have to upload a form of identification, a phone number, and a social networking site. They recommend that the currency exchange take place in a safe area, such as a coffee shop or a restaurant. The uChange team is working on an algorithm that will match a person’s demographics with the person with whom they’re going to exchange. “Say you’re searching for someone with $100, the people who would pop up would be Facebook friends or people with common interests or backgrounds,” Schubert says. “These social algorithms that Tinder uses, we’re working on as well. That will be the next phase. I hope the future will be a global brand like Airbnb or CouchSurfing, and building a community of hundreds of millions of users, who are saving a ridiculous amount of money and meeting new people in the process.”Schubert expects that uChange will start making money after it has a strong user base of roughly 500,000 or more. At that point, it plans on charging people $1 to download the application. The assumption is that users won’t mind spending a dollar, in order to save so much in the long run. uChange also plans on advertising for meet-up spots in the future, which would bring in more money. It may also offer a premium membership with no advertisements and improved chat features.uChange was created in Israel and is going through its trial phase in Israel. It was born from Israeli ingenuity and maybe even a little chutzpah. “It’s very cool that it’s happening here in Israel,” Schubert enthuses. “We live in Jerusalem, where everything is on the ground and everyone is in each other’s faces 24/7. The bartering system is coming back in a big way. There are so many countries, cities, and cultures that don’t trust their governments or their banks. They need a platform to be able to connect everyone in order to do these transactions. It’s putting the power back in people’s hands... The worst thing is that people honestly think that what the banks are telling them is the exchange rate when it isn’t. That’s what really infuriated me, which was essentially what set me off on this whole journey.”

For more information: uchange.cash/
Advertisement
Subscribe for our daily newsletter