Bringing the wonders of Shakespeare to Jerusalem’s high-school students. 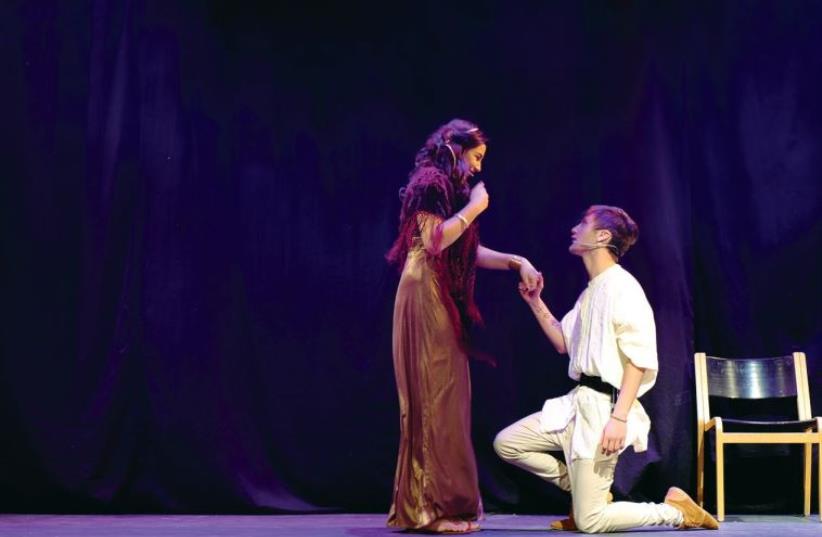 Campus Ankori’s production of A Midsummer Night’s Dream
(photo credit: YACHATZ)
Advertisement
On the evening of February 28, friends and family gathered in Beit Shmuel anxiously awaiting the start of Campus Ankori’s production of A Midsummer Night’s Dream.There was a warm feeling in the room as families greeted each other and talked about whose kids were performing, and fellow students arrived with their clans to support their friends. The audience cheered, laughed and yelled as the curtains went up.From the opening lines of the play, it was clear that this wasn’t your normal high-school production.Walk through the halls of Jerusalem’s Campus Ankori and you’ll immediately be greeted by students eager to ask you who you are.“Watch out!” someone will yell, as you duck to avoid being hit by an electric guitar, only to turn around and see a group of students sitting and talking with their teacher as if he were a friend. The halls are buzzing with students and teachers, and here there seems to be a much smaller divide between the two. There is an apparent air of openness, creativity and passion.Campus Ankori Jerusalem is one of seven private high schools associated with the Ankori Education Network. Established in 1948 by Hanoch Ankori, the network operates private secondary schools, publishes textbooks and provides exam preparation throughout Israel. The school endorses interactive learning through creativity, flexibility, personal attention and teacher-student relationships.At the beginning of the year, teacher Na’ama Mass brought the works of Shakespeare to her advanced-level English class. In the middle of class, one of the students proposed the idea of doing a play, and just like that a five-month project began. Mass chose A Midsummer Night’s Dream, hoping it would pose a fun challenge for her students. She sat down with each character, made sure they understood their lines and adapted the script to best fit the play.“I put a lot of focus on trying to keep the music of these lines,” Mass explains. Although condensed, the majority of the play preserved the original Shakespearean language.Many of the students jumped into their roles, as Mass tried to cast based on similarities in the personalities of the characters and those of the students.For student Rebekah Wagner, connecting to her role didn’t come as naturally as it did to the others.“To be someone really beggy and throwing herself at people is the total opposite of me,” Wagner explains. Seeing how her fellow classmates naturally assimilated to their roles, it took Wagner some time to warm up to Helena.“Although I’ve never been in a place where someone I loved so much didn’t love me back, I was able to connect with her…. At some point I realized how sad it was. How could a girl come to get to a place where she’s begging for someone to love her, and the guy can’t even look at her?” Wagner remarks.For Wagner, as with the majority of the other students, this was her first time acting.Gabriela Korson, who played Hermia, explains, “It brought so many people out of their comfort zone and gave a lot of people a sense of confidence they might not have had before, myself included.”Only about four of the 18 students had previous theater experience.One of those experienced students was David Roiterstein, who played Nick Bottom.“I think this really taught me not to overestimate myself and make myself a big deal. I learned to really be a part of this group and to be humble,” Roiterstein remarks.Mass adds, “The easiest to work with were the people with no experience, because they were so thirsty to learn. I could ask them for anything and they’d just do it.”Although the play was not of professional caliber, it was rather impressive that a group of high-school students could pull off a play in English, let alone in the English of the Bard.This play served beyond the purpose of honing the students’ English skills. As Roiterstein explains: “I think this taught everyone in the play what they’re willing to do with themselves. At first there were a lot of ‘I can’t’s, but now I think we’re all really open to trying new things.”The way the whole production was sparked, by a student simply shouting out an idea, speaks to the open-minded approach to learning at Campus Ankori. Student Samuel Carpenter explains: “At all my other schools, it’s mostly about the teachers standing in front of the room talking. Here it’s a lot more interactive. There’s a lot of dialogue between the teacher and the students.”Roiterstein adds, “It feels like a family here; you know you can always go to the teachers. This school endorses creativity. They challenge you to challenge them.”With an internationally and locally diverse student population, most of them living in Jerusalem, the school naturally feeds off a very open learning environment. The openness of the educators and students gives a different approach to knowledge, where students are eager to learn and expand their minds.Through the teaching methods instilled at Campus Ankori, students are opening meaningful dialogues between themselves and their teachers and learning valuable lessons that will serve them both in and outside the classroom.