Dramatic moves and announcements are expected. 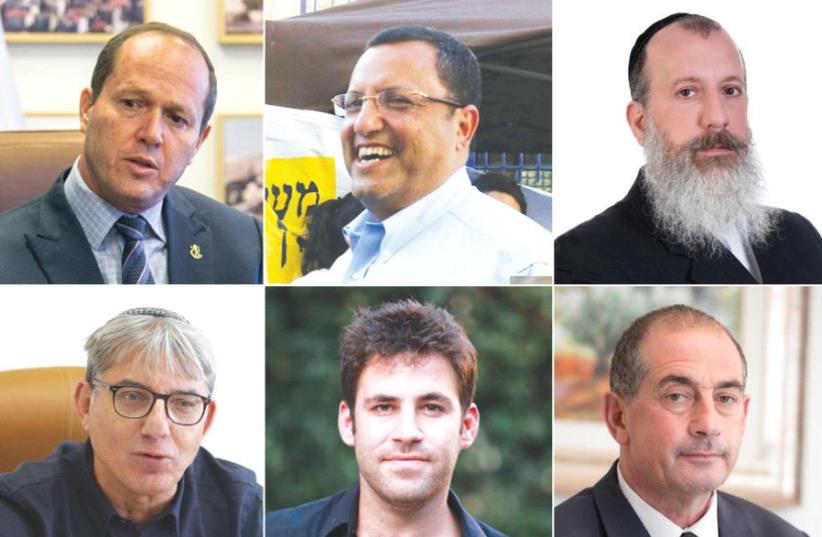 Nir Barkat, Moshe Lion, Yossi Daitch, Meir Turgeman, Ofer Berkowitz and Yossi Havilio
(photo credit: MARC ISRAEL SELLEM,PR)
Advertisement
Four people who are already tenants at Safra Square and at least two others are amassing their assets toward the “D-Day” scheduled for October 2018 – and other candidates with various capabilities to alter the upcoming mayoral election’s course might also join the festivities.Dramatic moves and announcements are expected.Before any scenario is presented, it is important to note that none of the official or semi-official candidates (who are already city council members) will run if Mayor Nir Barkat decides to run for a third term. As of less than two months ago, the off-the-record word from Safra Square was that Barkat was on his way to his next goal – the Knesset, as a member of the next government that Prime Minister Benjamin Netanyahu will form. But more recently word is that Barkat, realizing he is not gaining any popularity among Likud influencers, has made up his mind to abandon national plans.A scenario now considered possible is that Barkat will run for a third term, but if and when Netanyahu calls for general elections (and provided that he forms the next government) Barkat will be tapped for ministerial duty (as a minister doesn’t have to be an MK). Such a case would leave the mayoral chambers vacant and pave the way for Moshe Lion to become the next mayor of Jerusalem. This is what mayor Ehud Olmert did in 2003 for Uri Lupolianski who, three months later, won the election on his own merit.Who are the leading mayoral candidates, for now at least?

Moshe LionLion surprised quite a few when he remained in the capital following his failure in the last election in 2013. He acquired a house, moved his family here from Givatayim and even left the major accounting firm he founded and directed for years, completely immersing himself in his tasks as a city councilman.As holder of the local councils and community centers portfolio, Lion has access to a wide range of communities, a position that many consider a perfect springboard to reach out to eventual voters.Now a veteran Jerusalemite, Lion is officially the candidate of the city’s haredi community. However, considering the profound changes in that sector, this no longer provides the total mobilization of ultra-Orthodox voters for him that it would have in the past. As explained by a reliable haredi source, “The spiritual leadership in the haredi sector in general, and in Jerusalem in particular, is not the same. We saw the first sign of this tremendous change when for the first time, in the 2013 election, the haredim ran in two different lists for the council.“In the next election we will see more of that trend; it is no longer realistic that the traditional leading candidate for the haredi sector will exclude any other voting option for us.”

One of the results of these changes could be the surprising decision of Deputy Mayor Yossi Daitch, from the United Torah Judaism list and representing the hassidim in the party, to announce – albeit for the moment with a very low profile – his intention to run for mayor. Daitch, despite his gentle manners, is a hawk regarding all Shabbat issues in the city. A few months ago, he announced his intention to represent the haredim at city council and work toward a clear majority of haredim there.For him, forging a bloc with 16 ultra-Orthodox members (out of 30) at the council is a realistic goal, with or without his mayoral candidacy. However, while Daitch enjoys the sympathy of many haredim around him, there is no indication at the moment that any serious and prestigious rabbinical figure in the sector is backing his candidacy.“We all remember the failure of MK Meir Porush to challenge Barkat in 2013,” explains our source. “The chances that a haredi candidate will obtain the official support of the spiritual leadership is very low.”The fact that he was recently attacked twice by haredi extremists underscores that Daitch lacks the broad support needed for an eventual candidacy. However, because Jerusalem is so important for the haredi sector – which now represent almost 42% of the city’s Jewish population – Daitch and the Slonim Hassidic group to which he belongs will not renounce the goal of greater representation at city council, if not a haredi mayor, again.Most of the ultra-Orthodox city council members agree that appropriate housing solutions and creating more classrooms in their sector are the more urgent matters. However, Daitch has repeatedly expressed on a few recent occasions that for him, Shabbat issues are also vital.

Meir Turgeman and Ofer Berkowitz Two other deputy mayors – Meir Turgeman (Jerusalem Will Succeed) and Ofer Berkowitz (Hitorerut) are stepping cautiously toward official candidacy announcements. Turgeman has always kept his word since the beginning of this tenure not to run if Barkat runs again. Officially, Turgeman says that Barkat is a good mayor, and if he decides to run for a third term, there is no reason to challenge him. Yet in recent months, as the fog surrounding Barkat’s plans grew thicker, Turgeman began to feel he might be losing momentum, and went public a few weeks ago regarding his plans.While his position regarding Barkat (“If he runs, I don’t run”) remains unchanged, Turgeman now speaks more openly about his skills and his ability to step into Barkat’s shoes and into the office on Safra Square’s sixth floor. In the background, Turgeman – whose principal asset is his direct and warm connection with the public, through his open-door policy and hard work to provide answers to residents’ complaints – is already deep into his campaign.As for Berkowitz, he is more reserved – not because he is not interested in the position, but because he hasn’t yet made a firm decision. However, a recent campaign he launched on social media, framing himself and inviting others to frame themselves as 100% Jerusalemites (with a clear hint to Barkat’s eventual departure from the city’s affairs) has achieved his goal: through this campaign, he has sent a clear message that he is still in the race.Observers generally agree regarding the pair that most of their efforts would consolidate their position as unavoidable partners in any future coalition – primarily as deputy mayors and part of the capital’s next leadership roster. As for Daitch, as the source suggested, most of his messages are in fact addressed to his own sector, as part of the rift between “Lithuanian” haredim (Degel HaTorah) and hassidim (Shlomei Emunim), which together form the United Torah Judiasm party (and require frequent updating regarding which of the two elements is stronger).Yossi HavilioThe “outsider” among the candidates is attorney Yossi Havilio, formerly the municipality’s legal adviser. Once Barkat’s closest supporter, today he is his fiercest opponent. Havilio, a private attorney who chairs a pro-bono association focusing on issues that have great potential to irritate Barkat, has no obligation toward anyone in the city council, and hence is not halting any discussion that he plans to run – though for the moment, he hasn’t gone public. Close assistants emphasize that Havilio, not being part of the establishment, enjoys a freedom of action and of declaration that gives him a significant advantage over Barkat’s deputies.One of the most interesting questions regarding Havilio’s candidacy is: Who will he address? Havilio is always very cautious not to be considered an ally of any one side of the political spectrum; for him, it seems that even an affiliation with Meretz could erode some of the support he wishes to obtain from the larger public – which, in this city, is mostly identified with the Center and the right wing.Yet considering that a part of this public is more or less in the hands of Hitorerut, chaired by Berkowitz, Havilio’s choices are narrowed. He might seek support among the national-religious sector, but observers say that given his considerable efforts to keep institutions open on Shabbat, this might be a difficult endeavor.One major obstacle for Havilio is Lion, who already presents himself as the next mayor – and emphasizes that with all due respect to Barkat, he is the best choice, if not simply the most natural choice, thanks to his experience and the strong political backing he has to be the next mayor. Unfortunately for Lion, two of his major supporters, Arye Deri and Avigdor Liberman, are presently the subject of police inquiries and he himself was summoned to police headquarters (Lahav 433) recently, though not arrested or limited in any way.Will the inquiry have an impact on his chances for the position? Lion himself sounds confident that he remains clean and therefore will not be kept from running. Observers at Safra Square agree that so far, he has handled this inquiry in the best way, but since Deri is still under investigation, nobody can tell if anything more will pop up and reach Lion again.YET THE main actor in this poker game remains Barkat. Is he running a third time or not? For now, there are two opinions. One is that since he failed to become a member of the Likud power elite, he has dropped the idea of running for the Knesset. The other says that while it is true that his rise into the Likud top brass is not a success story, he has managed to establish a strong and discreet direct bond with Netanyahu, who likes the idea of having a “Mr. Clean” around, and thus will spare him the primaries gamut and simply appoint him minister in his next government.Stay tuned: The campaign is afoot.