It is true that the Israeli army is not meeting its induction goals. 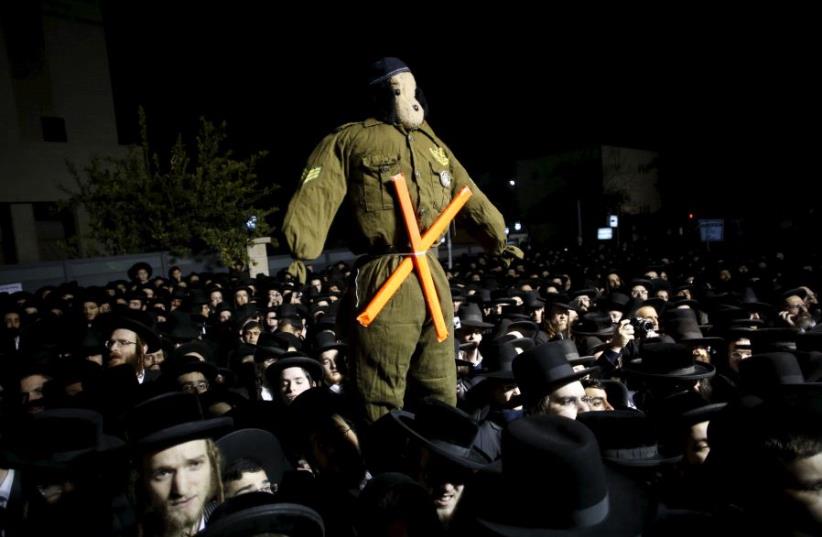 Ultra-Orthodox Jews attend a protest against a law calling for members of their community to serve in the army, in Jerusalem's Mea Shearim neighbourhood December 22, 2015.
(photo credit: REUTERS/BAZ RATNER)
Advertisement
Despite all the boycotts, cursing and condemnations, another group of recruits from the ultra-Orthodox community headed to the IDF induction center in early August. Their destination was the ultra- Orthodox Nahal unit where more and more young ultra-Orthodox men seek to serve. Currently, some 6,600 ultra-Orthodox men are in army uniforms, serving as regular army troops and career soldiers.It is true that the Israeli army is not meeting its induction goals. According to the latest report, 2,800 ultra-Orthodox men joined the army in 2016 when the target number was 3,200. Still, we should keep in mind that this is an increase of almost 15% in ultra-Orthodox enlistment compared with 2015. And, this upward trend is continuing even though the enlistment law was abolished. Moreover, young ultra-Orthodox men who choose not to enlist and ultra-Orthodox schools are no longer subject to sanction.As such, one might ask what makes young ultra-Orthodox men, both single and married, enlist? Are the ultra-Orthodox community’s ideology and values, as well as the way it views army service, undergoing a profound change? To understand the story of ultra-Orthodox enlistment in the Israeli army, we need to recognize that many of the single ultra-Orthodox men who enlist in this voluntary service sign up for combat units that have been adapted to the ultra-Orthodox lifestyle. Married men enlist mainly in vocational service tracks where they learn a trade and gain job experience ‒ things that help them join the job market later. According to our latest study at the Israel Democracy Institute, two primary reasons for the moderate, yet steady, increase in ultra-Orthodox enlistment are: utilitarian motives linked to the recruits’ need to gain high-quality job experience through the army’s training courses; and the desire for self-fulfillment, ideological expression and individual empowerment, which were unavailable to them in the yeshiva world.Army service is an extremely powerful “employment engine” for most ultra-Orthodox men whose religious education does not provide them with the general background or professional training necessary for joining the work force outside the ultra-Orthodox sector. Close to 90% of the ultra-Orthodox men who enlist join the work force after being discharged. In addition, 80% of these former soldiers are currently employed in “mixed” environments where religious and secular people work alongside one another. Furthermore, the feeling of solidarity with the wider Israeli society is high among ultra-Orthodox army veterans, 77% of whom feel that they are part of the state and its social challenges.While both the state and ultra-Orthodox society have an interest in bringing as many ultra-Orthodox people as possible into the army, many challenges remain – both in the enlistment process and the measures required to provide these young men with the best possible preparation for civilian life. The army needs to improve and adapt the classification and assessment processes used to fill various positions and, to this end, should create appropriate and targeted pre-army preparation frameworks. In addition, the army should expand the number of positions that are set aside for ultra-Orthodox soldiers, and upgrade the preparation for the job market that takes place during the “project year” for single soldiers who serve in combat units.Carrying out these improvements will provide additional benefits for more young ultra-Orthodox men who wish to perform army service. Ultimately, such a development is both advantageous for them and an important step toward a more equitable distribution of civic responsibility.Ultra-Orthodox society has been dismantling the walls of separation slowly and cautiously. Over the long term, incentives for ultra-Orthodox enlistment should not continue to be provided at the expense of other soldiers. The army should continue to encourage young ultra-Orthodox men to enlist, but not only for the sake of employment and material gain. Rather, the goal should also be to increase the moral and ideological motivations to serve within the obligatory service framework. Fortunately, there are signs that such motivations already exist in the ultra-Orthodox community. The author is a researcher at the Israel Democracy Institute and coordinator of ultra-Orthodox research in the Research Adminitration of the Ministry of Labor, Social Affairs and Social Services