When the going gets tough, the tough go drinking: Jerusalem’s ‘alternative’ nightlife scene

Prominent figures in Jerusalem’s nightlife scene weigh in on the current state of the city. 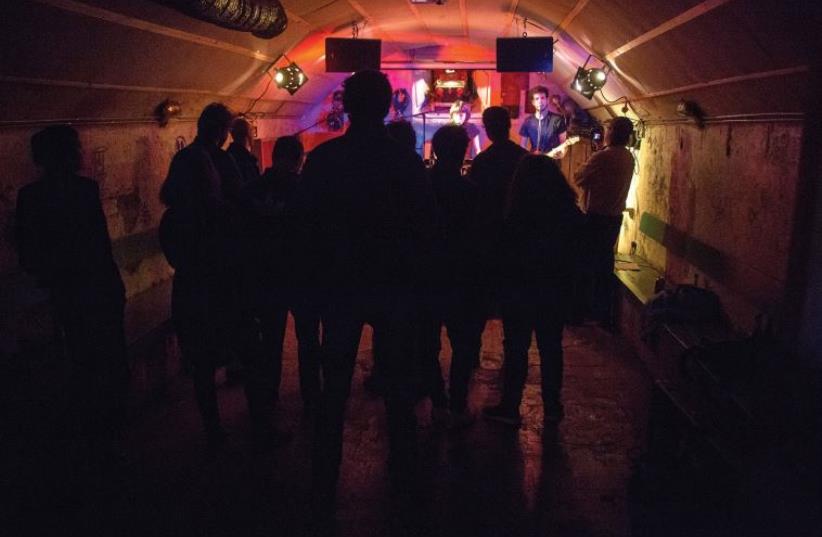 Hamizkeka
(photo credit: SARAH LEVI)
Advertisement
With the way things are going these days – tourism down, concerts being canceled, local establishments falling like dominoes throughout the city, not to mention the recent wave of violence – it is safe to say Jerusalem has seen better days.It has also seen worse.While all these grim events go on around us, we can take comfort in knowing that the Holy City’s hipsters and the establishments they frequent are most certainly not feeling the effects of this turn of events. The world of the hipster affords them the comforts of venturing out into the city no matter what the political or outdoor climate.As such, on any given Friday night, bars such as the Sira, Hamizkeka and the Casetta are filled to the brim with cigarette-rolling, hetzi Maccabee [half-liter of Maccabee beer]-drinking, tattoo-adorned, iPhone- scrolling students, aspiring DJs and artists who refuse to let the winds of change get in the way of their nightly libations.

These are the bars that cater to the large number of art school students who love to huddle in packs, stay out late, chain-smoke and sip cheap beer, all with the sound of obscure electronic music thumping in the background. The demand is high for this brand of thrill-seeker, and the capital does not fall short in giving the hipsters what they want.Avi Goldberger, a 39-year-old Jerusalem nightlife mogul, has been active in the scene for nearly two decades.He holds three iconic bars in his portfolio: the nine-year old Taklit, the five-year-old Casetta (we’ll highlight this one in a second) and the four-year old Video Pub (the only gay bar in Jerusalem). All three bars are located in the Russian Compound, within arm’s reach of one another on Helene Hamalka and Hyrcanus Streets.Of the three, it is the Casetta that attracts the most “creative” types. The space itself is something reminiscent of an underground bar somewhere in Europe, giving off a cave-like atmosphere with its limited space, dark interior and low ceilings, and what comes out of the speakers is less like music and more like experimental “sound art.”As Goldberger explains: “It all fits the hipster agenda.”Unlike at his other two bars, he can count on nightlife denizens with this type of “agenda” to stay and continue drinking into the wee hours – long after most bars close for the night.Despite the recent closing of three hipster meccas, the Radio, Uganda and the Machsan, all within a few hundred meters of Zion Square, Goldberger convinced me this has nothing to do with the situation going on in the city – and everything to do with the businesses themselves.“You cannot expect a bar to close in two weeks,” he maintains. “It takes months to complete a process of closing a place. They have all wanted to close for some time, and it just so happened to be around the time of this recent wave of violence.“I think that places will struggle in the spring or summer because of a lack of tourists, a fear of going out or the recession; those places could then blame the ‘third intifada’ or whatever they call it,” continues Goldberger.If there is something contributing to the economic damage on area nightlife left in the wake of this wave of violence, it would be the recent order Taglit-Birthright received to not allow participants to go out to city pubs. Goldberger believes this will cause many pubs that rely on this business to suffer a lot.“It is absurd, because Taglit is sponsored by the Israeli government and Israeli taxpayers; so the Israeli taxpayer is actually sponsoring a program that boycotts a part of Jerusalem.”On the other side of Jaffa Road is Shushan Street, close to the gates of the Old City and the eclectic neighborhood of Musrara. This has become the new “it” place for hipsters to enjoy their late-night libations.When night falls on the city of gold, this street can be seen strewn with tight-pants wearing, tote-bag toting, Tubi 60 liquor-chasing youngsters hopping in and out of the Cactus and the wildly popular Hamizkeka.The people inside this dark and cavernous bar are often seen bobbing their heads in a trancelike state to infectious, repetitive beats pumped out by a seemingly endless supply of local DJs plugged into the pub’s state-of-the-art speakers.Mikael Berkowitsch, the owner of the two-year-old self-described “nonprofit project called Hamizkeka” felt the effects of the wave of violence during the early days. He recalls that fleeting time in which the city streets were all but deserted, back in October. His establishment was not immune to this either.“Our government masters the art of sowing fear into people’s minds, which creates a situation in which people prefer to stay at home, though this was most heavily felt during the first days of the outbreak. A few days afterward, it felt like people started to reclaim their need to live, rather than giving into fear or surrendering to this seemingly impossible situation.”At this point Berkowitsch and his nonprofit are no longer affected by the external events in Jerusalem, and are back to facing the day-to-day struggles of running his bar; promoting local art and culture, paying the artists and staff, and of course, paying the bills every month.The oldest and most iconic of this group is the Sira, known as the Diwan until 2005. This spot has proven an unbreakable force in city nightlife, drawing in one of the most eclectic crowds seven nights a week and often keeping the beer flowing and the music pumping well into the early morning.Gilli “Da Kid” Levy, a fixture in Jerusalem’s alternative nightlife scene for over a decade, has been the mastermind behind a bevy of events throughout the city.He is now focusing his energy on creating entertaining and cultural events for the guests of the Sira.Levy has been coming to this pub for more than 10 years and believes it is the best spot in the capital in terms of fusion. And by fusion, he means all the different kinds of people one can encounter in a night out at the Sira.“Old people, young people, hipsters, arsim [derogatory slang for low-class young men], tourists, short, tall, fat – everything!” He believes the secret to their success is that they work with the area’s “natural resources,” including local musicians and DJs, to create a unique Jerusalem nightlife experience.As the city reels from the heavy blow of terrorism these past several months, the desire to return to the comforts of daily life is strong with the inhabitants of Jerusalem. With this, we can look toward the hipsters and emulate their habits in our own ways.If we really want to do our share to maintain a sense of normalcy – and perhaps have a little fun in the process – it is up to us make the first move, and just go out and experience this vibrant and eclectic city.