US advises its citizens in Brussels to 'shelter in place'

The State Department could not verify a claim of responsibility by Islamic State for the attacks. 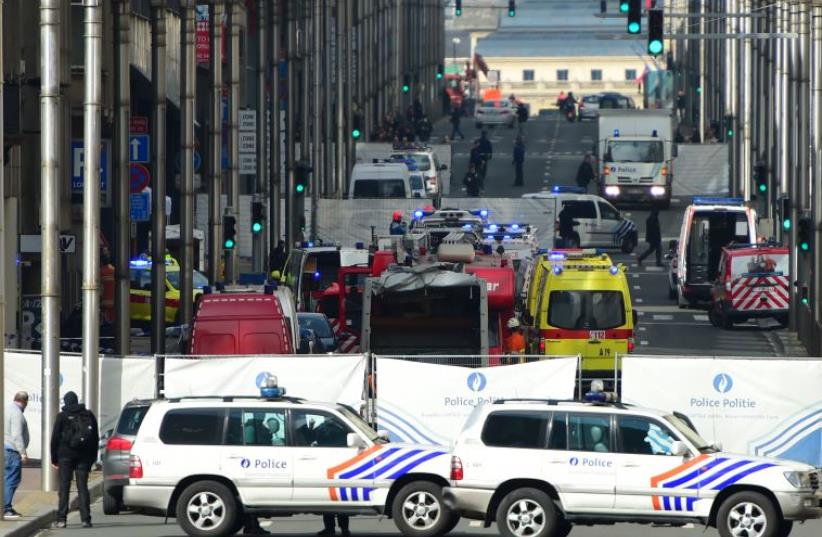 Policemen stand guard at the entrance of a security perimeter set near Maalbeek metro station, on March 22, 2016 in Brussels, after a blast at this station near the EU institutions caused deaths and injuries
(photo credit: EMMANUEL DUNAND / AFP)
Advertisement
WASHINGTON -- Several US citizens are among the wounded in Tuesday's attacks on Belgium's capital, the State Department confirmed on Tuesday.The US could not immediately confirm an exact figure. But in total, Belgian authorities say that at least 30 people are dead and over 170 are wounded from twin strikes against Brussels' metro and airport systems.US President Barack Obama condemned the attacks on his last day in Cuba, and phoned his Belgian counterpart, Prime Minister Charles Michel, with condolences."This is yet another reminder that the world must unite, we must be together, regardless of nationality, or race, or faith, in fighting against the scourge of terrorism," Obama said in a speech from Havana. "We stand in solidarity with them in condemning these outrageous attacks against innocent people.  We will do whatever is necessary to support our friend and ally, Belgium, in bringing to justice those who are responsible."The State Department also could not verify a claim of responsibility by Islamic State, which detailed the attacks in an English-language statement hours after the rush-hour bombings. But among the items found in one raid, just hours after the attacks, were "chemical products," a nail bomb and a black Islamic State flag.The US advised its citizens who remain in Brussels to shelter in place.On the campaign trail, Hillary Rodham Clinton of the Democratic Party recommitted herself to the battle against Islamic State, and emphasized the need to fight them online, where "radical Jihadists," as she characterized them, are successfully operating and coordinating in dark and encrypted web space. She said the attack was a reminder of the importance and relevance of the NATO alliance– headquartered in Brussels– as Europe and the US together fight Islamist organizations.Donald J. Trump, frontrunner for the Republican presidential nomination, called for the US to divest from NATO on Monday. Reacting to the news out of Brussels, Trump said with confidence: "This is going to happen in the United States.""They’re coming in by the thousands and just watch what happens— I’m a pretty good prognosticator— just watch what happens over the years. It won’t be pretty," he said.Trump also took the opportunity to renew his call for the US to legalize torture. "Frankly, the waterboarding, if it was up to me, and if we changed the laws or had the laws, waterboarding would be fine," Trump said. "If they could expand the laws, I would do a lot more than waterboarding. You have to get the information from these people."