Djokovic, seeking a record-breaking 21st Grand Slam win at the Australian Open, was seemingly granted a medical exemption from vaccine requirements – though he was subsequently denied entry.

World number one tennis player Novak Djokovic was denied entry into Australia on Thursday after a storm of protest about a decision to grant him a medical exemption from COVID-19 vaccination requirements to play in the Australian Open.

The tennis star remained in Australia after his lawyers launched an appeal seeking to overturn the federal government decision. A court agreed not to deport him before a full hearing scheduled for Monday, leaving the Serbian champion holed up in a quarantine hotel in Melbourne for at least the next 72 hours.

The saga, fueled by domestic political point-scoring about the country's handling of a record surge in new COVID-19 infections, has led to an international row, with Serbia's president claiming his nation's most celebrated sportsman was being harassed.

Prime Minister Scott Morrison said his country sticks to its rules. "Mr. Djokovic's visa has been canceled," Morrison said on Twitter. "Rules are rules, especially when it comes to our borders. No one is above these rules. Our strong border policies have been critical to Australia having one of the lowest death rates in the world from COVID, we are continuing to be vigilant."

This came after Morrison said he wanted proof of Djokovic's exemption from the COVID-19 vaccine that cleared the defending three-time Australian Open champion – and nine-time winner – to participate in the tournament later this month. Hunt said Australia will not make special exemptions to those who don't meet the requirements. "Yes, it's tough but it's fair and it's equitable and it's one rule for all under this Australian government," Hunt said.

The Australian Border Force (ABF) released a statement to address the cancellation of Djokovic's visa: "The ABF will continue to ensure that those who arrive at our border comply with our laws and entry requirements," the statement began. "The ABF can confirm that Mr. Djokovic failed to provide appropriate evidence to meet the entry requirements to Australia, and his visa has been subsequently canceled... Non-citizens who do not hold a valid visa on entry or who have had their visa canceled will be detained and removed from Australia."

Djokovic, 34, was initially denied entry because of an error with his visa application. And when Djokovic arrived in Australia, one official was unmoved by the error with his visa, which stemmed from the fact that his paperwork had been completed incorrectly with regard to his medical exemption status.

Jaala Pulford, the acting sports minister in the state of Victoria, where Melbourne is located, said the state wouldn't support his application. "The Federal Government has asked if we will support Novak Djokovic's visa application to enter Australia," she tweeted. "We will not be providing Novak Djokovic with individual visa application support to participate in the 2022 Australian Open Grand Slam."

Spanish champion Rafael Nadal told reporters in Melbourne that he felt sorry for his rival "but at the same time, he knew the conditions since a lot of months ago. He makes his own decision."

Australian tennis great Rod Laver, after whom the main show court at Melbourne Park in the state of Victoria is named, warned that Djokovic might face hostility from the local crowd.

"I think it might get ugly," Laver told News Corp. "I'd think the Victorian people would be thinking 'Yes I'd love to see him play and compete, but at the same time there's a right way and a wrong way.'"

Djokovic, who has consistently refused to disclose his vaccination status while publicly criticizing mandatory vaccines, kicked off the furor when he said on Instagram on Tuesday he had received a medical exemption to pursue a record-breaking 21st Grand Slam win at the Open starting Jan. 17.

The announcement prompted an outcry in Australia, particularly in the tournament host city of Melbourne, which has endured the world's longest cumulative lockdown to ward off the coronavirus.

'NOT HUMAN AND NOT FAIR'

The move by the Australian government to block Djokovic's entry has caused ructions between Canberra and Belgrade.

Serbian President Aleksandar Vucic said on Twitter he had spoken with Djokovic and accused the Australian government of harassment.

"We're doing all we can. This persecution is unfair, starting with the Australian prime minister," he later told Serbian media. "They are acting as if the same set of rules apply to everyone, but they've let in others on the same grounds that Novak had applied to."

Morrison said he was aware that "representations have been made" by the Serbian embassy in Canberra and denied the accusations of harassment.

Djokovic's father told media in Serbia that his son was ushered into an isolation room under police guard when he touched down at Melbourne's Tullamarine airport at about 11:30 p.m. (1230 GMT) on Wednesday after a 14-hour flight from Dubai.

His family later held an emotional news conference at Djokovic's restaurant in central Belgrade, with his nine previous Australian Open trophies on display.

"They are keeping him in captivity. They are stomping all over Novak to stomp all over Serbia and the Serbian people," said his father Srdjan, who had earlier told local media his son was "the Spartacus of the new world."

His mother, Dijana, added: "They are keeping him as a prisoner, that's not human and it's not fair."

There was also support on the streets of the Serbian capital.

"He is the best in the history of that sport and they cannot break him in any other way but this one. But they are not going to break him," said Belgrade resident Zdravko Cukic. 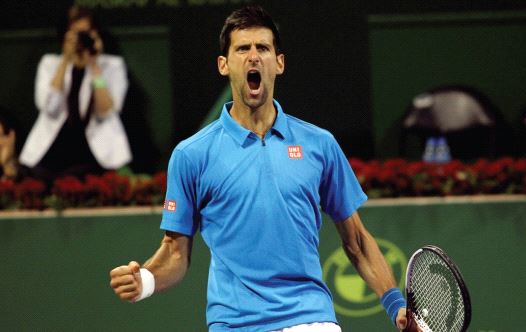 At a hearing in the Federal Circuit and Family Court of Australia on Thursday evening, lawyers for Djokovic and the government agreed the player could remain in the country until at least Monday.

Nick Wood, a lawyer for Djokovic, earlier told Judge Anthony Kelly that Tennis Australia had advised they needed to know about his participation in the tournament by Tuesday.

In response, Kelly, who had asked when Djokovic was scheduled to play his first match, said: "If I can say with the respect necessary, the tail won't be wagging the dog here."

Djokovic's fate is tied to a political fight in Australia, characterized by fingerpointing between Morrison's conservative administration and the left-leaning Victoria state government.

Under Australia's federal system, states and territories can issue exemptions from vaccination requirements to enter their jurisdictions. However, the federal government controls international borders and can challenge such exemptions.

Djokovic traveled to Australia after receiving an exemption from the Victorian government. That exemption - the reasons for which are not known - supported his federal government-issued visa.

On his arrival, however, Federal Border Force officials at the airport said Djokovic was unable to justify the grounds for his exemption.

The Australian task force that sets the exemption parameters lists the risk of serious cardiac illness from inoculation and a COVID-19 infection within the past six months as qualifiers. However, Morrison said on Thursday that Tennis Australia had been advised weeks ago that a recent infection did not meet the criteria for exemption.