“Partners must help each other, and partners is what we need in order to defend Europe,” Zelensky said.

Ukrainian President Volodymyr Zelensky appeals to Russians to stage protests over Russian forces' seizure of the Zaporizhzhia nuclear power plant, the largest in Europe, during an address from Kyiv, Ukraine March 4, 2022 in this still image from video.
(photo credit: Courtesty of Ukrainian Presidential Press Service/Handout via REUTERS )
Advertisement

Ukrainian President Volodymyr Zelensky spoke with Polish President Andrzej Duda on Saturday, thanking him for welcoming the many Ukrainians that have come to seek refuge in his country.

Soon after, Zelensky took to Facebook and called on the member-states of NATO to further help Ukraine in the fight against Russia's invasion. "The security of Ukraine is the security of all of Europe," Zelensky said.

Frustrated with the minimal military support Ukraine is receiving, Zelensky asked ”what is the price of security?  There is a very specific answer. It is tanks, planes, anti-aircraft-defense and anti-ship missiles. Our allies have these resources, but they prefer to allow them collect dust in their warehouses.”

“All we ask for is one percent of NATOs tanks and planes, we did not ask more and we will not ask more,” he implored.

“31 days we have been waiting for military support. Who is running the euro-Atlantic community (NATO) is it still Moscow?” Zelensky said, implying NATO members are fearful of Russia. “We are partners and as such we must help each other. Partners are what we need in order to defend Europe.” 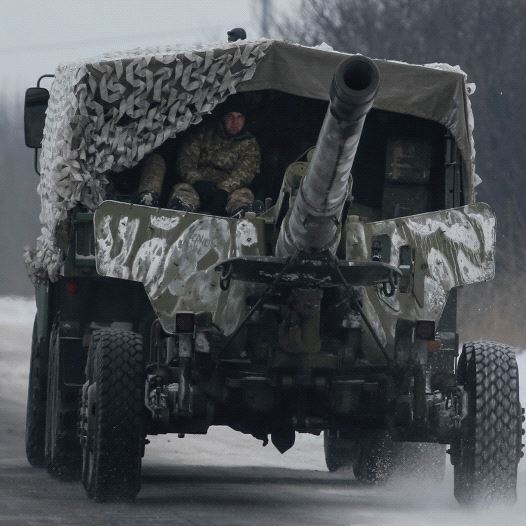 A UKRAINIAN military vehicle rushes to the front as fighting flares in Ukraine between separatists and the government. (credit: REUTERS)

He later spoke of the Russian soldiers and their behavior towards civilians and innocents. “The soldiers received orders to demolish whatever unifies our country as a nation. Russian forces are using the same method the Nazis tried to use 80 years ago. Hopefully, the world will not forgive them.”

Zelensky soon walked back the comparison he made to the Holocaust and said: “Not exactly like the Nazis, but the meaning will be similar. You will see.”