Chomsky, who originally made his name in linguistics, has been known for his anti-war, anti-capitalist, and anti-Zionist stances.

NOAM CHOMSKY is accused by the author of numerous inaccuracies and the projection of ‘a crippling ideological rigidity.’
(photo credit: MAJED JABER/REUTERS)
Advertisement

Jewish American philosopher and linguist Noam Chomsky said that Ukraine must make concessions to Russian demands, saying that the public must “pay attention to the reality of the world,” in an interview with Current Affairs on Wednesday.

“One option is to pursue the policy we are now following… to fight Russia to the last Ukrainian. And yes, we can pursue that policy with the possibility of nuclear war. Or we can face the reality that the only alternative is a diplomatic settlement, which will be ugly – it will give Putin and his narrow circle an escape hatch,” Chomsky said.

“We know the basic framework is neutralization of Ukraine, some kind of accommodation for the Donbas region, with a high level of autonomy, maybe within some federal structure in Ukraine, and recognizing that, like it or not, Crimea is not on the table,” continued Chomsky. “You may not like it, you may not like the fact that there’s a hurricane coming tomorrow, but you can’t stop it by saying, ‘I don’t like hurricanes’ or ‘I don’t recognize hurricanes.’”

Chomsky, who originally made his name in the field of linguistics, has been known for his anti-war, anti-capitalist, and – perhaps most prominently – anti-Zionist stances. He has called Israel’s military defense akin to “murder,” has said that Palestine deserves justice from US and Israeli “war crimes,” and called the adoption of the 1947 United Nations Partition Plan for Palestine "a very bad decision." He most recently signed an open letter denouncing what the letter called an Israeli plot to silence a pro-Palestinian musician. 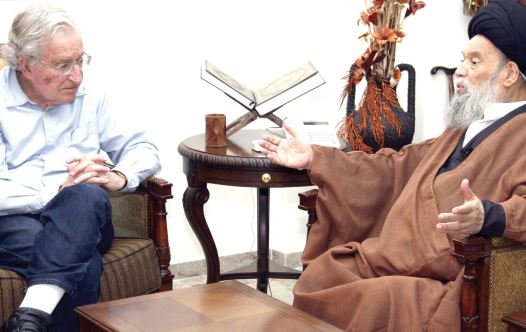 Chomsky’s rise to political prominence began with his 1967 anti-Vietnam War essay “The Responsibility of Intellectuals,” which helped lead to his placement on President Richard Nixon's Enemies List in 1971. He has also spoken at length about American military interventionism, capitalism, and neoliberalism.