Iran regime massacre should be investigated by Oberlin College - US

Oberlin owes everyone an explanation as to why Mr. Mahallati was hired in the first place despite his very questionable background.

In a dramatic development in favor of Iranians seeking accountability for the Iranian regime’s massacre of 5,000 political prisoners in 1988, Congressman Jim Banks (R-Indiana) urged Oberlin College to launch a new investigation of its Islamic studies professor Mohammad Jafar Mahallati for his alleged role in the mass murder.

“It’s distressing that Oberlin continues to ignore the victims of Iran’s terrorist regime, and continues to defend a former senior Iranian official on their faculty, who is cited in UN and Amnesty International reports as having worked to deny mass killings in Iran," Banks said to The Jerusalem Post.

"Oberlin owes everyone an explanation as to why Mr. Mahallati was hired in the first place despite his very questionable background, and why they’ve refused to conduct a transparent and independent investigation on this issue,” Banks added.

Banks is on the powerful congressional education and labor committee and is spearheading the Maximum Pressure Act to force  Iran’s regime to abandon its reported plan to build a nuclear capable weapons.

Banks opposes the Iran nuclear deal, formerly known as the Joint Comprehensive Plan of Action. The nuclear deal will permit Tehran to develop atomic weapons after a temporary freeze on its nuclear program in exchange for economic sanctions relief, argue JCPOA experts. 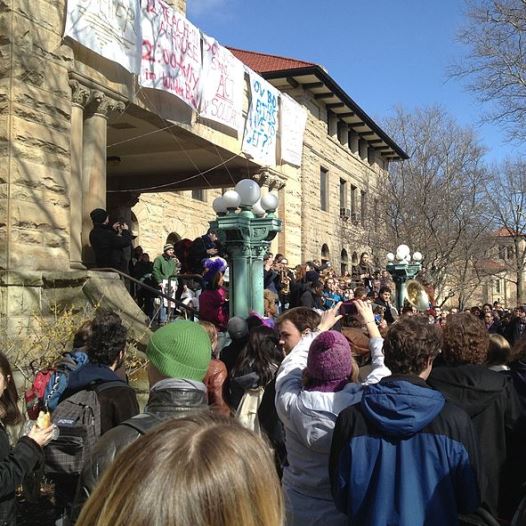 Lawdan Bazargan, an Iranian-American political and human rights activist, who will be traveling to Oberlin College in June to protest Mahallati’s alleged crimes against humanity in 1988. “Our campaign started with a simple request, fire Mahallati who denied the mass killings of our loved ones and shielded those responsible from accountability," she told the Post.

Mahallati served as the Islamic Republic of Iran's ambassador the UN from 1987-1989.

“Since Oberlin President [Carmen Twillie Ambar]  and its board of trustees decided to ignore us, ran a sham and non-transparent investigation, refused to meet with the victims' families, and started rumors about our independence and connections, now we have to appeal to politicians and state and federal authorities," Bazargan added.

"If Oberlin College's leadership does not know how to lead, we will find allies who know how to deal with allegations of mass murder.”

Bazargan and members of the  organization Alliance Against Islamic Regime of Iran Apologists will be in Oberlin during the first week of June at the college’s commencement to draw attention to their plight. The clerical regime murdered Bazargan's brother Bijan in 1988 for his dissenting views and his support for a leftist party in the Islamic Republic.

The entry of Banks into the row over Mahallati has raised the stakes. Banks is the first congressional politician to weigh in on the campaign to sack Mahallati. Iranians have generated enormous US and international media traction about Mahallati and Oberlin College's alleged mishandling of Mahallati's case.

On Oberlin's campus, there are large rocks used for political messages. Last week, students took photographs of Mahallati painting over a message on a stone that called for him to be fired.

“I hope that because it’s Commencement, people who aren’t students will pay attention," Sophie Bernstein, a fourth-year Iranian-American student, told the student paper The Oberlin Review.

“I think Oberlin College has failed these protestors in a lot of ways. I hope that a broader audience at Commencement would be more sympathetic than people have up until this point,” she added.

Joshua Angrist,  an Israeli-American economist  who won the e Nobel Memorial Prize in Economics in 2021, is slated to deliver a commencement speech at Oberlin College in June.

Angrist is a professor of economics for the Massachusetts Institute of Technology and a graduate of Oberlin College. Iranian-Americans urged Angrist to consider pulling the plug on his commencement speech to protest Ambar’s support of Mahallati. Angrist declined to respond to a Post query.

In an email to the Post, Mahallati denied the allegation of aiding the clerical regime during mass murder in 1988. The Post revealed in 2021 that Mahallati urged a violent global jihad against Israel when he was ambassador to the UN in the late 1980’s. Mahallati also said the UN should not have recognized the state of Israel.

The Post reported in May that Mahallati supported the fatwa of the Islamic Republic of Iran's first Superme Leader Ruhollah Khomeini to murder author Salman Rushdie. Mahallati declined to respond to a Post query about his role in the plot to execute Rushdie.