The deaths once again highlight the challenge of controlling migrant crossings for Biden. 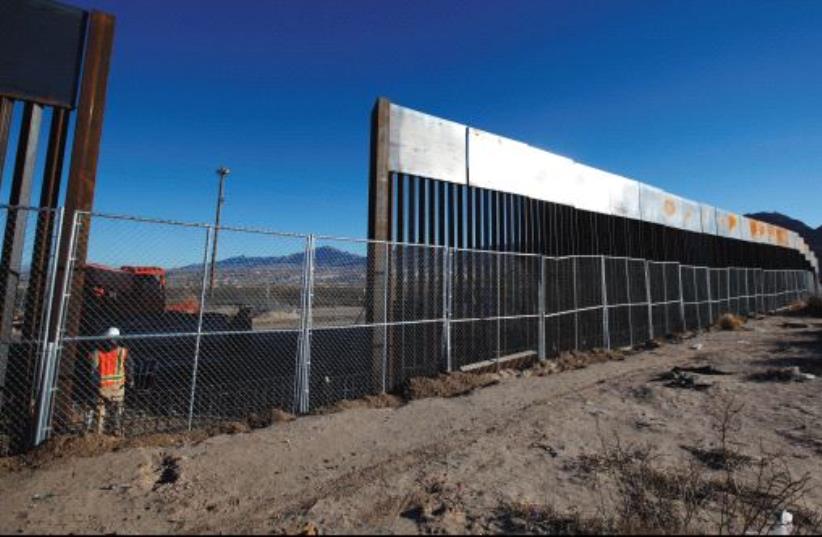 A WORKER STANDS next to a newly built section of the US border fence at Sunland Park, New Mexico, opposite the Mexican border city of Ciudad Juarez, on Wednesday. Picture taken from the Mexico side of the border.
(photo credit: JOSE LUIS GONZALEZ/REUTERS)
Advertisement

At least 51 migrants have died after being trapped inside a sweltering tractor-trailer truck found abandoned in Texas, authorities said on Tuesday, as two Mexican nationals tied to the smuggling incident were charged in US federal court.

The deceased migrants, 39 men and 12 women, were discovered on the outskirts of the Texas city on Monday, where temperatures swelled to a high of 103 Fahrenheit (39.4 Celsius).

Authorities responded to a remote area in the southern part of the city and found the truck parked next to railroad tracks. Bodies were strewn over a couple of blocks after it is believed that the back door of the trailer was opened, a local law enforcement official told Reuters on Tuesday.

Local and US authorities said there were no signs of water and no visible working air conditioning inside the truck. Officials said there were "stacks of bodies" and that some of the migrants were hot to the touch.

"It's unspeakable," San Antonio Mayor Ron Nirenberg said on MSNBC, noting that his community depends on migrants while there is a labor shortage. "It's a tragedy beyond explanation."

A US border patrol agent looks over the Rio Grande river at the border between United States and Mexico, in Roma, Texas, US, May 11, 2017 (credit: REUTERS)

US President Joe Biden said in a Tuesday statement that the incident was "horrifying and heartbreaking."

Calling out the multibillion-dollar criminal smuggling industry, Biden said that "exploiting vulnerable individuals for profit is shameful," adding that his administration was working to crack down on these networks.

Biden has struggled with a record number of migrant crossings at the US-Mexico border since he took office in January 2021.

Some 22 Mexicans, seven Guatemalans and two Hondurans were identified among the dead, Mexico Foreign Minister Marcelo Ebrard said on Twitter on Tuesday. There was no information on the nationality of the other victims, Mexican officials said.

More than a dozen people were transported to hospitals for heat stroke and exhaustion, including four minors, the San Antonio Fire Department said.

At a bilingual press conference outside one of the hospitals treating patients on Tuesday, Rebeca Clay-Flores, a Democratic local official in Bexar County, Texas, sharply criticized Republican Governor Greg Abbott for a tweet on Monday night that blamed Biden's border policies for the incident even as the emergency response unfolded.

"While bodies were still being removed, and others being taken to local hospitals, he chose to be heartless and point the finger," Clay-Flores said. Abbott's office did not immediately respond to a request for comment.

At University Health, the hospital where the press conference was held, officials said they were treating a 23-year-old Guatemalan woman whose condition was improving and a teenage boy. For him, Clay-Flores said, "we are asking for prayers."

The truck may have been carrying around 100 migrants, but the exact number remains unclear, according to a law enforcement official and US Customs and Border Protection (CBP) official briefed on the investigation.

"While bodies were still being removed, and others being taken to local hospitals, he chose to be heartless and point the finger."

San Antonio's police chief, William McManus, on Monday said a person who works in a nearby building heard a cry for help and came out to investigate. The worker found the trailer doors partially opened, looked inside and found a number of dead bodies.

It appeared that the migrants had recently crossed the US-Mexico border and were picked up by the truck to be taken to where they would work, said a Mexican official and two of the US officials.

The migrants were sprinkled in a pungent substance, said the two sources, speaking on condition of anonymity. In past incidents, smugglers have used different substances to disguise the smell of human cargo and evade canine detection.

Federal prosecutors are expected to open a criminal investigation into the matter, one of the law enforcement sources said. The US Attorney's Office for the Western District of Texas declined to comment.

US Immigration and Customs Enforcement (ICE) confirmed the death toll and said that its Homeland Security Investigations division had detained three individuals "believed to be part of the smuggling conspiracy."

The local law enforcement official said one suspect was arrested by the truck and two were found at a house after police tracked a vehicle an eyewitness described leaving the scene. A Mexican official, speaking on condition of anonymity, said at least one of the three people arrested had American citizenship.

The surviving migrants will likely be released into the United States to pursue asylum or other forms of humanitarian relief, the CBP official and two other law enforcement officials told Reuters.

Some survivors of human smuggling in the past have been taken into the custody of the US Marshals Service to testify as witnesses, but whether that will happen here remains unclear.

The deaths once again highlight the challenge of controlling migrant crossings for Biden, a Democrat who came into office pledging to reverse some of the hard-line immigration policies of his Republican predecessor, Donald Trump. Republicans have criticized Biden's border strategy ahead of the midterm congressional elections in November.

In July 2017, 10 migrants died after being transported in a tractor-trailer that was discovered by San Antonio police in a Wal-Mart parking lot. The driver, James Matthew Bradley Jr., was sentenced the following year to life in prison for his role in the smuggling operation.

The I-35 highway near where the truck was found runs through San Antonio from the Mexican border and is a popular smuggling corridor because of the large volume of truck traffic, according to Jack Staton, a former senior official with ICE's investigative unit who retired in December.

"It was only a matter of time before a tragedy like this was going to happen again," Staton said.