On This Day: Srebrenica massacre in Bosnia begins, 27 years ago

By JERUSALEM POST STAFF
A woman cries at a graveyard, ahead of a mass funeral in Potocari near Srebrenica, Bosnia and Herzegovina July 11, 2020. Bosnia marks the 25th anniversary of the massacre of more than 8,000 Bosnian Muslim men and boys, with many relatives unable to attend due to the coronavirus disease (COVID-19) ou
(photo credit: REUTERS/DADO RUVIC)
Advertisement

July 11, 2022 marks 27 years since the Srebrenica massacre, the horrific genocidal murder of over 8,000 Muslims during the Bosnian War in former Yugoslavia as part of the then-ongoing conflicts in the Balkans.

The massacre and the events surrounding it continues to cast a shadow on geopolitical affairs within the Balkans to this day.

The Bosnian War began in 1992 and was built of longstanding conflicts and tensions simmering in the Balkans, an incredibly ethnically, linguistically and religiously diverse region that had formerly been united, albeit with tensions, as Yugoslavia. 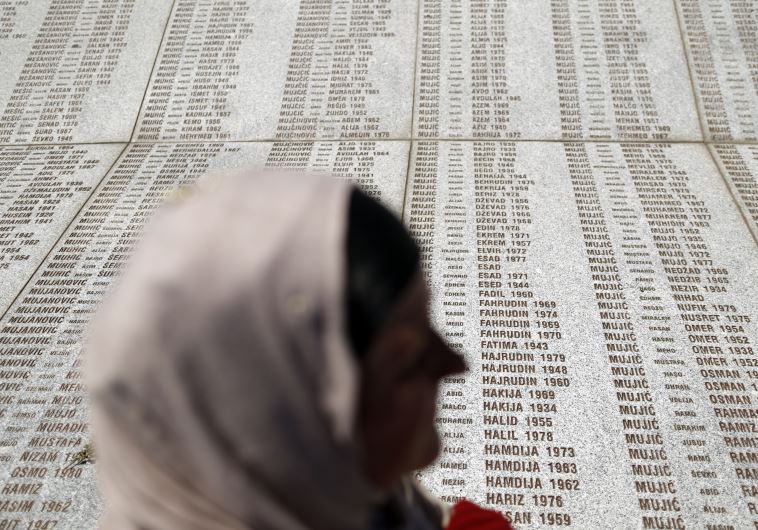 A woman stands in front of the Memorial Center during a reburial ceremony of 136 newly identified victims in Potocari, near Srebrenica, Bosnia and Herzegovina (credit: REUTERS)

These tensions boiled over after Yugoslavia broke up into a number of states over the course of nearly a year between 1991 and 1992.

The conflict itself was centered in one of these states, Bosnia and Herzegovina, a country where almost half the population were Muslim Bosniaks.

When Bosnia and Herzegovina voted in a referendum to become independent, the Bosnian Serb representatives boycotted and rejected it.

This soon sparked the conflict itself.

But, by 1993, relations between Bosnia and Herzegovina and Croatia soured, and soon Croatia and Herzeg-Bosnia would begin fighting on both sides.

By 1994, this changed again, with the Croats joining back with Bosnia and Herzegovina and seeing support from NATO.

Widespread atrocities were ensured throughout the war, with many accusations of genocide, ethnic cleansing and rape being levied at Serb forces.

But the standout atrocity of the war was what happened in July 1995 in Srebrenica.

“The Bosnian Serb forces committed genocide. They stripped all the male Muslim prisoners, military and civilian, elderly and young, of their personal belongings and identification and deliberately and methodically killed them solely on the basis of their identity.”

Prelude to a massacre

Srebrenica itself was a small besieged enclave in eastern Bosnia and was considered an UN-protected safe zone. Before that, it was the site of considerable fighting between both sides.

According to some testimonies, a 1993 attack on nearby Serb villages by Bosnian forces was seen as the spark that the massacre itself would be a retaliation.

There were issues in the town, but despite that, Muslim Bosniaks fleeing the Serbs took shelter in Srebrenica and towns like it.

On July 11, 1995, the Serb forces commanded by General Ratko Mladic overran Srebrenica, which was protected by lightly armed Dutch peacekeepers.

They sent women and children away and captured and executed the men and boys they found. The bodies were dumped into mass graves and later exhumed by UN investigators and used as evidence in war crimes trials of Bosnian Serb leaders.

Though the massacre itself did not begin in earnest until July 13, it was Mladic's conquest of Srebrenica that day that began it, lasting until July 22.

What happened in Srebrenica is a horrific atrocity, a methodical operation that saw 8,000 people killed in just a few days. And it is an atrocity that Serb officials finally acknowledged in 2004 that they deliberately planned and carried out.

By seeking to eliminate a part of the Bosnian Muslims, Theodor Meron, presiding judge of the Appeals Chamber of the International Criminal Tribunal for the former Yugoslavia in The Hague declared, “The Bosnian Serb forces committed genocide. They stripped all the male Muslim prisoners, military and civilian, elderly and young, of their personal belongings and identification and deliberately and methodically killed them solely on the basis of their identity.”

Overall, the Bosnian War saw over 100,000 people killed and over 2.2 million people displaced. There was no shortage of atrocities during the war, but the Srebrenica massacre stood out among all of them.

Within the Balkans to this day, Bosnians continue to mourn those who were lost in the massacre.

Many people involved, including those at the scene like Mladic and others, such as Srpska leadership and even those in the Serbian government, were indicted and convicted of war crimes by The Hague.

However, it continues to cast a shadow in the Balkans, especially as many Serbs allegedly deny that it ever happened, or at the very least that it didn't constitute genocide.

Reuters and Vernon Bogdanor contributed to this report.