By MICHAEL WILNER, JPOST.COM STAFF, REUTERS
SEPTEMBER 24, 2013 19:52
Obama UNGA 913 370
(photo credit: REUTERS)
Advertisement
NEW YORK - United States President Barack Obama clearly laid out his vision for the US role in the Middle East at the United Nations General Assembly on Tuesday, calling for international enforcement on Syria's chemical weapons, announcing face-to-face talks with Iran and reiterating his commitment to seeing through the Israeli-Palestinian peace process. The president started with a definitive message on Syria, which reflected his comments in the weeks since the Syrian regime allegedly used chemical weapons on its own civilians. He called for a firm UN stance on destroying the chemical weapons, in the wake of an agreement between the US and Russia on the issue. "There must be a strong Security Council resolution to verify that the Assad regime is keeping its commitments," Obama said, referring to the Syria leader's agreement to dismantle its chemical weapons. "There must be consequences if it fails to do so." He also did not shy away from his previous threat of action against the Syrian regime over chemical weapons attacks. "The US is prepared to use all elements of our power - including miltary force - to secure our interests in the [Middle East and North Africa]," Obama said. "When its necessary to defend the US against terrorist attacks we will take direct action." Although, the US president added, it will be difficult to achieve these objectives through unilateral US efforts. On the subject of Iran's nuclear program, the president said that recent statements from the Iranian leadership to show that there is basis for agreement, adding that he has directed Secretary of State John Kerry to pursue a deal. In closely watched remarks on Iran, based on a diplomatic opening offered by the country's new president, Hassan Rouhani, said the United States wants to resolve the Iranian nuclear issue peacefully but is determined to prevent Iran from developing a nuclear weapon."The roadblocks may prove to be too great but I firmly believe the diplomatic path must be tested," Obama said.Focusing on the Israeli-Palestinian peace process, which restarted this summer under the auspices of his government, the president said that the Israeli-Arab conflict and Iran would make up the primary diplomatic initiatives going forward through rest of his second term as president. Real breakthroughs on Iran and Israel-Palestine would have a profound and positive impact on all of the Middle East and North Africa, he said. "Friends of Israel, including the US, must say clearly that its future depends on the creation of a Palestinian state," Obama told the Assembly. "The Palestinian people have a right to live in dignity in their own state," he went on, echoing comments he made during a speech in Jerusalem in March. "The US will always support Israel... as a Jewish state," he stated, but warned that the ongoing occupation in the West Bank was tearing Israel apart.
He also sought to reassure skeptics on American commitment to a long-term role: "We will be engaged in the region for the long haul," he vowed. UN  Secretary-General Ban Ki-moon also focused on the Middle East in his opening remarks at the GA,  saying that the only solution to the conflict in Syria is a political one.In regard to the Israeli-Palestinian peace process, Ban said, "we must recognize that the window is closing fast". 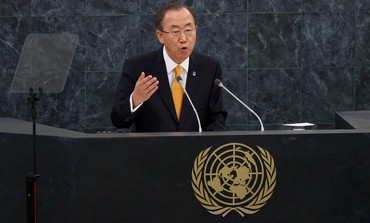 Ban Ki-moon addressing the UNGA,
September 24, 2013. (Photo: Reuters)
He added that the need to agree to a two-state solution would secure the "long-term interests of the peoples and the region".The United States and its allies have for years applied pressure on Iran to give up its nuclear ambitions. Tehran denies trying to build a weapon and insists its nuclear program is for civilian purposes only.But a US-Russian agreement this month aimed at getting control of Syrian chemical weapons after an Aug. 21 poison gas attack in Syria has added momentum to efforts to engage Iran.Obama and Rouhani exchanged letters recently in which each expressed a willingness to find a diplomatic outcome.Tweets from @Jerusalem_Post/jpost-at-unga-2013