The head-on collision between two trains happened on a single stretch of track in countryside between the towns of Corato and Andria, in the southern heel of Italy. 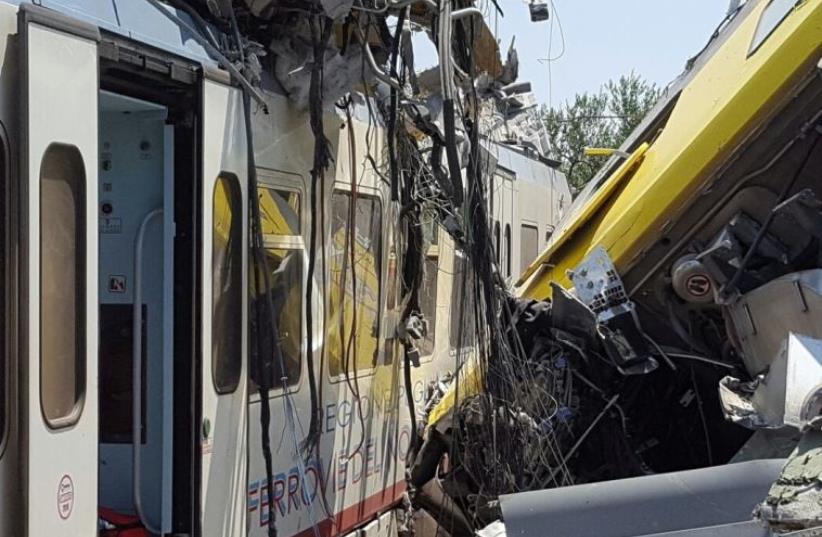 Two passenger trains are seen after a collision in the middle of an olive grove in the southern village of Corato, near Bari, Italy, in this handout picture released by Italian Firefighters July 12, 2016
(photo credit: REUTERS)
Advertisement
BARI, Italy - Twenty people died and dozens were injured when two passenger trains collided head-on in southern Italy on Tuesday, a regional official told reporters.The force of the impact crumpled carriages and sent debris flying into an olive grove that flanked the single stretch of track in countryside between the towns of Corato and Andria."Unfortunately the death toll has risen to 20," said Giuseppe Corrado, the deputy head of the local province. He appealed for blood donors to go to local hospitals.Firemen worked in fierce summer heat after the crash, which happened at around 11.30 a.m. (0930 GMT), picking through the wreckage and shattered carriages in search of other victims."The rescue is complicated because this happened in the middle of the countryside," said Luca Cari, a fire service spokesman, the sound of crickets ringing out as rescue teams started to extract bodies from the site.There was no immediate indication of what had caused the two trains to be travelling towards each other on the same line and the Transport Ministry said it was dispatching two investigators to the region of Puglia to look into the disaster."We won't stop until we get a clear explanation over what happened," Prime Minister Matteo Renzi told reporters, cutting short a visit to Milan in northern Italy to return to Rome. He was due to travel to Puglia later in the day.The trains each had four carriages. A photograph released by the fire brigade showed that three carriages had disintegrated under the impact, suggesting at least one of the trains had been travelling at high speed."It looks like there has been a plane crash," said the mayor of Corato, Massimo Mazzilli.The stretch of track is operated by regional rail company Ferrotramviaria. It was not clear how many people had been on the trains at the time of the collision.The last major rail disaster in Italy was in 2009 when a freight train derailed in Viareggio, in the centre of the country, and more than 30 people living close to the tracks died in the subsequent fire.