Nearly 700 kidnap victims have been freed from Boko Haram's stronghold in the northeastern Sambisa Forest since Tuesday. 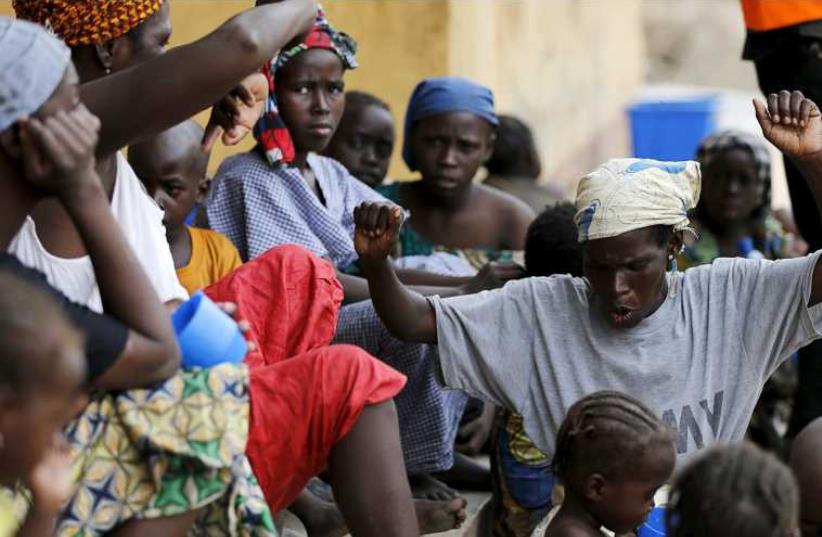 A woman rescued from Boko Haram in Sambisa forest celebrates her freedom from Boko Haram at Malkohi camp for Internally Displaced People in Yola, Adamawa State, Nigeria
(photo credit: REUTERS)
Advertisement
YOLA, Nigeria - Hundreds of traumatized Nigerian women and children rescued from Boko Haram Islamists have been released into the care of authorities at a refugee camp in the eastern town of Yola, an army spokesman said.The 275 women and children, some of whom had bandaged heads and arms, arrived in the camp ran by the National Emergency Management Agency (NEMA) on Saturday night after days on the road traveling in pick-up trucks.Nearly 700 kidnap victims have been freed from Boko Haram's stronghold in the northeastern Sambisa Forest since Tuesday, with the latest group of 234 women and children liberated on Friday."We don't have the facilities and resources to take care of these," army spokesman said. "The best organization in the country to take care of these people is NEMA."Initial indications are that none of more than 200 schoolgirls snatched from their school dormitories in Chibok town in April 2014 were among the three groups released this week.While Boko Haram has been kidnapping girls and women and turning them into cooks, sex slaves and human shields even before the attack on Chibok, it was that one incident that drew global attention to the six-year-old insurgency.It is not known how many people Boko Haram has abducted but Amnesty International estimates the insurgenst, who are intent on bringing western Africa under Islamist rule, has taken more than 2,000 women and girls captive since the start of 2014.Boko Haram is thought to have killed thousands of people but Nigerian troops alongside neighboring armies from Chad, Cameroon and Niger have won back swathes of territory from them in the last couple of months.